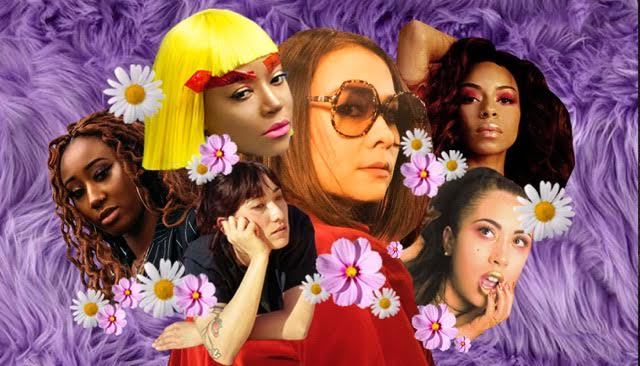 With so much incredible new music surfacing each day, we owe it to our ears to take a look around every once in a while. Peruse this list of 26 female and femme-lead projects, and for more, check out our previous list of 21 female-fronted bands.

Seattle-based rapper Parisalexa enchants with beautiful R&B-pop fusion tracks, hitting all the right curves with a liquid-smooth voice and flow backed by tight production that just manages to keep up with her brilliance.

There’s something that recalls teenage nostalgia and cathartic yearning in the lyrics and upbeat-gloom unique to Oakland queer butch electro pop project Sapphic Lasers. With hooks for days, Ache is the perfect retro solo dance party album you’ve been waiting for.

There are few words to accurately describe the gem that is BbyMutha, but transcendent comes close. Based in Chattanooga, Tennessee and a mother of four, BbyMutha is a ruthless force of nature with serious style who is light years ahead of her time.

Atlanta, Georgia songbird Faye Webster has been compared to Stevie Nicks thanks to her breezy but deep-cutting songs. As YouTube user Fatuma m writes in the comments section for “She Won’t Go Away,” “that guitar and her voice feels like summer and the wind breeze on my face and hair absolutely beautiful yo!”

Listening to Kari Faux’s music is like slipping into a bath of velvet. With a diverse repertoire that jumps from lowkey Tribe Called Quest-reminiscent jams to hard-hitting rap numbers, Faux’s upbringing in Southern gospel and her release of a series of mixtapes has evolved her into a mesmerizing artist experimenting across genres.

Queens native Dai Burger lives up to the name of her homebase with raps that bleed infectious glamour and confidence, slinging lyrics such as “me and my bitches we about to start a riot/And we don’t give a fuck about no diet.” Take your pick of this diva’s grooves to find your new feel-myself summer anthem.

Singer-songwriter Lindsay Jordan’s debut album is bursting with enough intimacy and melodic dimension to send shivers down your spine. With the instrumental and lyrical depth of a seasoned musician at only 19, Snail Mail is certain to be one of the greats of our time.

The haunting production and vocal stylings of Half Waif may nod firmly to Kate Bush, but the strange beauty of the Nani Rose Plunkett-fronted project also taps into something entirely different.

Teyana Taylor’s music is fresh air, finding a perfect place between old school and futurism by blending motown samples with minimalist R&B beats, pulled together by the singer’s angelically soothing voice that winks at Amy Winehouse and Lauryn Hill.

There is something heartbreaking yet uplifting about Haley Heynderickx’s songwriting. With a devastating voice and unrestrained instrumental creativity, the Portland, OR artist offers a nostalgic oeuvre of raw emotionality that feels like falling love.

The viable musical lovechild of Donna Summer and Prince, Ravyn Lenae’s trippy, fiery funk has vibes to shoot you to outer space.

Kali Uchis, who grew up between Colombia and North Virginia, has evolved into a genre defying artist whose music mingles across a variety of influences including soul, pop and funk. Uchis’ intoxicating vocals and boundless creativity are truly the stuff of magic.

Shilpa Ray harnesses a soulful and gritty voice in wonderfully expressive songs, whose diversity reach from boppy to hymnal to screaming and shredding.

The songwriting of Anna McClellan is awe-inspiring in its simplicity and seemingly effortless beauty, made greater by harrowing piano and often a ballad-like persuasion remiss of pretension or theatrics. McClellan’s introspective and subtly melancholic vocals harken towards Daniel Johnston, but McClellan also brings something entirely unique to listeners.

Singer songwriter Mitski Miyawaki has released five albums brimming with intimacy, emotion and romance, beginning with 2012's Lush, recorded while the Japanese-American artist was studying music at Purchase College. Mitski's songs vary on themes of seeking escape, belonging, reciprocated love, and the harrowing complexities of desire and longing, sung over instrumentals resembling everything from industrial harshness to feather-soft lullabies.

Erykah Badu On Aging, Motherhood, And Living "One Breath At A Time"

Tags: music , Mitski , Snail Mail , Teyana Taylor , Kali Uchis
Support Feminist Media!
During these troubling political times, independent feminist media is more vital than ever. If our bold, uncensored reporting on women’s issues is important to you, please consider making a donation of $5, $25, $50, or whatever you can afford, to protect and sustain BUST.com.
Thanks so much—we can’t spell BUST without U.