Today, Pussy Riot continued their demands for justice and police reform in Russia with a new song and video, “Track About Good Cop.” The song imagines a future in which Russian police and citizens are partners in creating a safe and just society. It’s a stark contrast to the country’s reality, in which police arrest Russians for speaking out against their corrupt and violent government. The video shows Pussy Riot members dressed in police uniforms dancing happily, while singing lyrics like “Me and the cop, we’ve turned from enemies into a duo,” (according to the video’s English translation).

The video was released in response to the news that four of Pussy Riot’s members will be held in jail for 15 days for their (ridiculously badass) creative disruption at the World Cup Final last Sunday. The four activists, wearing police uniforms, stormed the soccer field in the middle of the game to protest Russia’s use of police power to crush free speech and expression. Between those at the stadium and those watching on TV, hundreds of millions of people—including Russian president Vladimir Putin himself—witnessed Pussy Riot’s bold protest. Unsurprisingly, the activists were arrested immediately and publicly, which only served to emphasize the point they were making. 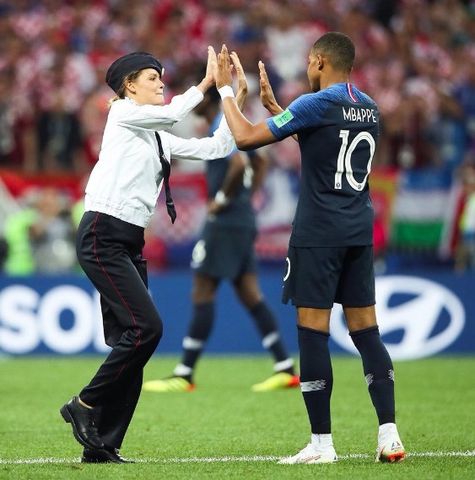 After news broke of the activists’ sentencing, Pussy Riot expanded their original list of demands to include their members' release from jail. According to Pussy Riot's Facebook, the four activists were kept overnight in the police station without being allowed to sleep, eat, take a shower, or talk to their lawyers. 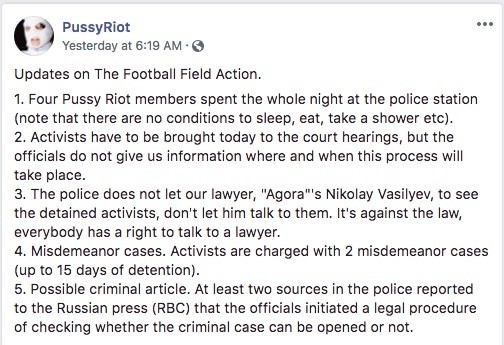 The group is also demanding that police stop arresting Russians who participate in political rallies or post anti-Putin views on social media, and calling for the release of those who have already been imprisoned. 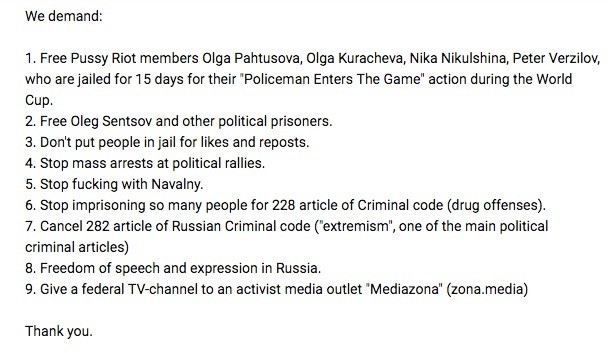 Pussy Riot’s new and improved list of demands, posted in the description of “Track About Good Cop” on YouTube.

The punk performance group has been fighting for freedom of speech and expression in Russia, and for a justice system that actually lives up to its name, since 2011. The group rose to international fame after three of their members were imprisoned for an anti-Putin performance in a Moscow cathedral. More recently, Pussy Riot has released anti-Trump statements and videos, cementing their status as activists not just for Russia, but for feminist causes all over the world. (You can read more about Pussy Riot’s World Cup action here, and check out formerly imprisoned Pussy Riot member Nadya Tolokno on the cover of BUST here.)

“Track About Good Cop” is a continuation of Pussy Riot’s commentary on poet-activist Dmitry Prigov’s vision of a “heavenly policeman”—a policeman who works together with the people to create a free and fair country rather than enforcing a violent dictatorship. With images of police dancing together, this song and video makes that vision real for a few minutes. The images are just as powerful for American audiences, as we continue to witness the daily horrors of police brutality on Black and brown people. We, too, need to imagine and fight for the replacement of police violence with the “heavenly policeman,” who protects our rights rather than stripping them away.

Top photo: Screenshot from "Track About Good Cop" on YouTube.

Confused About Russia? This Female-Led Podcast Has Your Back: Bust Interview

Tags: Pussy Riot , Russia , police
Support Feminist Media!
During these troubling political times, independent feminist media is more vital than ever. If our bold, uncensored reporting on women’s issues is important to you, please consider making a donation of $5, $25, $50, or whatever you can afford, to protect and sustain BUST.com.
Thanks so much—we can’t spell BUST without U.