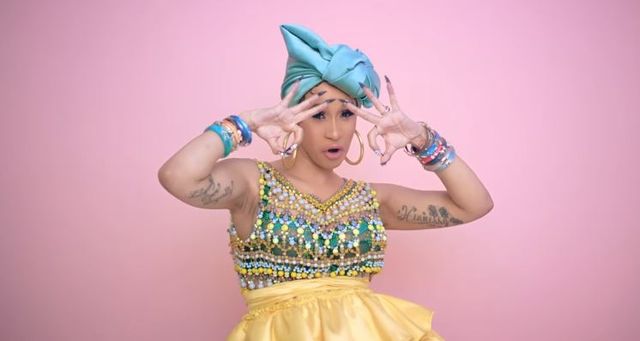 “I Like It,” the latest single off Cardi B’s album Invasion of Privacy, hit number one on the Billboard charts yesterday, making Cardi the first female rapper to ever top the charts twice. Even before this milestone, Cardi B had already made history as the first female rapper to snag No. 1 in almost 20 years with last summer’s hit “Bodak Yellow.” Check out “I Like It,” featuring Bad Bunny and J Balvin, below, and read more on Pitchfork.

The tennis superstar is back at the championship for the first time since giving birth last September, and won her eighth Wimbledon title against the Netherlands’ Arantxa Rus. “It’s a great feeling to be back,” she said in comments carried by French news agency AFP. “It’s been a couple of years since I played on grass, so it is difficult trying to find the rhythm.” Read more on CNN.

According to new research from a Yale University team, women are freezing their eggs not to delay childbirth but because of a “lack of stable partners,” reports The Independent. The data came from interviews with 150 women in the U.S. and Israel. A frequent misconception, that women freeze their eggs to prioritize their career, was actually the least common response recorded. Read The Independent’s full story.

Nevada’s Legislature Could Shift To A Female Majority

Currently, 38% of Nevada’s legislature is comprised of women—and because of a record number of female candidates in the running this November, this percentage could move to up to 65%, which would make Nevada the first state to have more women than men in the State Senate and Assembly, reports The New York Times. States including Maine, Colorado, and Oregon also have the potential to elect enough women to make up half the state legislature. Read the NYT’s coverage here.

The six-part, Jay-Z-produced docuseries, Rest in Power: The Trayvon Martin Story, premieres July 30, and the Paramount Network has dropped the first full trailer. The series will follow the book of the same title written by Martin’s parents, Tracy Martin and Sybrina Fulton. Martin and Fulton are also executive producers. Read more on BuzzFeed, and catch the trailer below:

Cardi B Joins Jimmy Fallon On "The Tonight Show," Continues to Slay Us All

Tags: Cardi B , Serena Williams , Wimbledon , Nevada , vote women , Trayvon Martin , Jay-Z
Support Feminist Media!
During these troubling political times, independent feminist media is more vital than ever. If our bold, uncensored reporting on women’s issues is important to you, please consider making a donation of $5, $25, $50, or whatever you can afford, to protect and sustain BUST.com.
Thanks so much—we can’t spell BUST without U.