Missy Elliott On "The Female Era" in 1998: From The BUST Archives 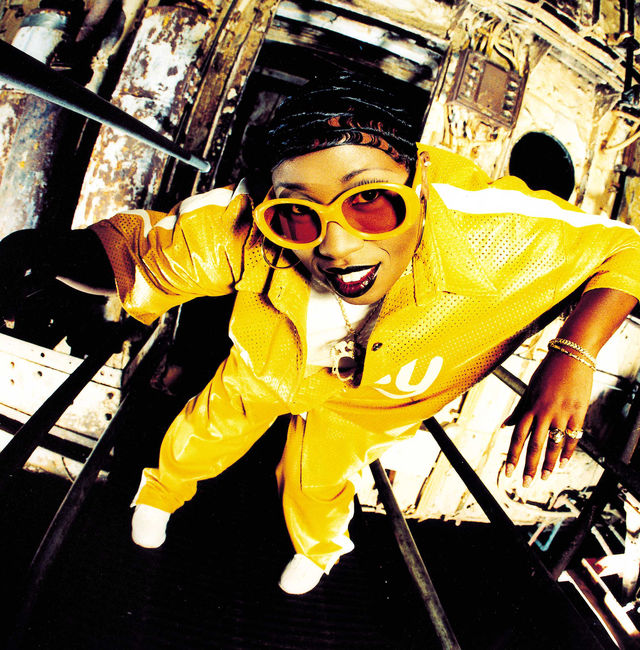 To celebrate BUST's 25th anniversary, we're bringing some of our favorite cover stories online for the first time. Here's our  story with Missy Elliott from our Summer/Fall 1998 "Girlfriends" issue.

A minute ago, the question on everyone’s lips was, “Whazzup with the chick in that crazy Hefty Bag jumpsuit?” Now Missy “Misdemeanor” Elliott is the buzz in the music industry. At twenty-five she’s been nominated for three Grammys, three MTV video awards, and two Soul Train awards. After starting her own label, Goldmind, she’s developed and produced acts like Nicole Ray, Timbaland, Aaliyah, Ginuwine, Jodeci, 702, Mariah Carey, Lil’ Kim, MC Lyte, New Edition, Busta Rhymes, Da Brat—in fact, Missy’s worked with just about anyone that’s hot out there.

In fact, by the time you read this, you can add Paula Cole, Fiona Apple, and Janet Jackson to that list, along with two major film soundtracks, including the one for Dr. Doolittle, starring Eddie Murphy. When I asked her what was left, she smiled, and—clutching the bag of peanut M&Ms I had brought to bribe her—said, “You know I wanna put my foot in anything I can put it in. I’ll be acting soon—maybe I could do two movies and then go back to my albums. But I won’t do a series cause that takes too much time.” Personally, I would love to see this chick shake up the networks. Hit ’em wit da hee, Missy!

Scarlett: It seems to me that there’s a real community of support in hip hop, especially among the women. I see all these women crossing labels, working with each other—you don’t see that elsewhere. You don’t see Jewel showing up for say, Gwen Stefani.

Missy: [laughing] Right. I’ve built a friendship with a lot of the female artists. For females, doing music is like having a conversation, like how we sit on the phone with friends and talk—it’s easier for two girls to hang out than it is for a whole bunch of guys. I don’t know, it’s just the bond.

Scarlett: You think guys are more competitive with each other?

Scarlett: Do you find that kind of support with other women outside of hip hop and rap? I know you just worked on Mariah’s “Butterfly.” And she’s more pop, so…

Missy: I just did Paula Cole too, yesterday. And I’m getting ready to work on something with Fiona. And I just did Janet Jackson.

Scarlett: Do you prefer working with women? All of the people that you’re currently working with—Paula, Fiona, Mariah, and Janet—are women.

Missy: It’s just easier when it’s a female, because I’m speaking from my point of view. When I write for a guy, I gotta think like a guy. I have to think like why do guys do certain things. But I work with guys too, like Ginuwine, Timbaland and Magoo—they’re like my family. And I’m doing the soundtrack for Why do Fools Fall In Love (upcoming Vivica A. Fox film), and I wrote some songs for guys for that. We’ll see how it goes.

Scarlett: You’d been writing and producing for a while before people started hearing about you. Is that how Lil’ Kim, Mary J Blige and the crew of women you’ve been working with became friends?

Missy: Mary was dating KC from Jodeci, and I met her at the studio one night when she was at a Jodeci session. She made me think she could braid hair, then when I got to her house she was like, “I was just playing!” (Laugh). Mary is crazy; I love Mary. I met Lil’ Kim at Puffy’s studio. At first we didn’t click, but after sitting down and talking with her, I realized she’s one of the sweetest people that I’ve ever come across in the industry.

Scarlett: Do you think the hip hop community is more cooperative than the rest of the music business?

Missy: Honestly, it looks like that from the outside but it’s not that cooperative. In hip hop it’s about cliques, different crews. Like there’s me, Timbaland, Ginuwine, Aaliyah, and now Nicole, which is the Supafriends. Then there’s Puffy, The Lox, Mase, and Total, which is Bad Boys. Then you may have Wyclef, Lauren, and Pras, and that’s the Allstars. So, if you hear Puffy on a Mase record—well, of course, because they’re in the same camp. 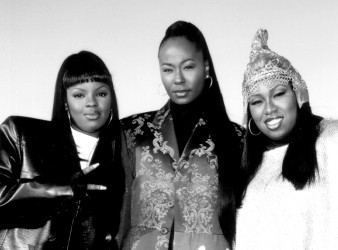 Scarlett: So, with Lil’ Kim and Da Brat, since you’re on different labels, do you have to go through the whole movie, or can you just talk to each other and work it out?

Missy: That’s where the friendship comes in. Calling up, saying “Yo Kim, I got this song I want you to please come rap on.” Then after, she’ll go to Puffy or whatever label and be like: “Look, I just did a song with Missy—I want it to be out.” She has to deal with her label…

Scarlett: Do you and Kim have a good time working together?

Missy: She’s one of my best friends. We’re both Cancers, too. We’re totally alike—all we do is laugh and joke, sit on the phone for hours and hours, and just joke about different stuff. We give a lot of advice to each other, too. She just got a production company, and she may ask me business questions. Or I may have just come out of the studio, and I wanna get her opinion on a song—on if it’s dope or not. So I’ll play it for her, work on it, let her hear it again and she’ll be like, “Oh yeah, that’s it.” It’s not a competition thing. Only in a positive way—to compete and have both of us be successful.

Scarlett: One of the things I like about the women who are rapping today is their strength. They’re taking charge of their lives, their sexuality, and everything else. That’s hard, ’cause up until pretty recently rap and hip hop was pretty much a man’s thing.

Missy: I noticed that at the Grammys. Seeing a lot of females get nominated let me know that this is the female era. Like you said, as far as the industry goes, it’s always been a male-dominated world, but now we’re totally coming in on both sides—hip hop and pop. There are a lot of females taking control.

Scarlett: Is there antagonism between the East Coast/West Coast females like there is with the males?

Missy:Oh, no. Females are busy trying to get their nails done and their hair done. We ain’t got time to be worried about what side we’re on. I wouldn’t wanna be on just one side. I’m trying to have my music everywhere that everybody can listen to it. I would wanna make a whole album in Japanese or Chinese, if I could talk in that language. I most definitely wanna be universal. I think all the female rappers feel like that; there’s no time for “I’m on the East Coast” or “I’m on the West Coast.”

Scarlett:Tell me about growing up in Virginia.

Missy:Like that movie, Soul Food(laugh). My grandmother was like the lady from Soul Food. I’m the only child, so I’m very very close to my mother. I have no brothers or sisters that I know of. My father might have some other kids, but I’m the only child my mother and father had together. Me and my mother lived in a very abusive home with him. We had to move out, so my mother basically raised me. My mother did whatever she could to make sure that I fit in with the other kids. I had everything that any other kid would want. Even if she hadda work overtime to get me the name brand jeans or shoes I wanted, she did it. So I never lived a poor life—I’ve always been blessed.

Scarlett: When you were coming up, did you think you were gonna get this big? That you’d have your own company? Is your mother freakin’?

Missy: At one point in time she was like, “You need to go to college.” I used to always tell her, “I’m not going. I’m gonna be a star one day. She was like, “Until you’re a star, you’re going to college.” Right at the time I was thinking about going to college, I got the deal with Jodeci. I just feel like I was supposed to be in the industry no matter what, whether I was gonna be a writer, a producer, an A&R person, something—I was gonna be in the industry no matter what.

Scarlett: You started doing music in high school with a bunch of girlfriends, and you called yourself Sista, right? Y’all just went up to the hotel with Jodeci and…

Missy: We was kinda skeptical at first, you know, you got four guys and four girls…we was like “Ooohhh. They want us to come to the room. They probably think we just some groupies.” But we just got straight to the point. “Can we sing for y’all? Y’all tell us if you like us or not.” If they didn’t, we was leaving. We sung three songs for them and they were like “We love y’all” so…

Scarlett: What happened to the other women in Sista?

Missy: They’re home in Virginia. One of the girls does nails. I didn’t ask what they were doing—long as I knew they were fine, it’s cool. 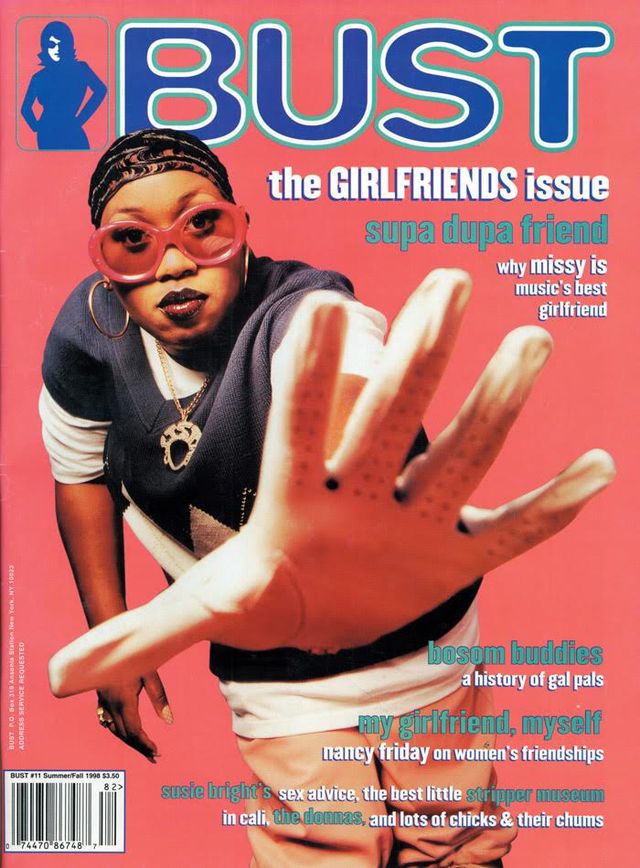 Michelle Obama And Missy Elliott Get Their Freak On

What Missy Elliott Can Teach Us About Feminism