Betty Davis, The Original "Nasty Gal": From The BUST Archives

We've been huge fans of soul siren Betty Davis for awhile now, and we're very excited to see the new documentary, Betty — They Say I'm Different which will have it's US premiere at the Red Bull Music Festival on May 23rd. So we decided to dig up this interview we did with her back in 2007. Enjoy!

Mention the name “Betty Davis” and most people will either comment on how good she was in What Ever Happened to Baby Jane? or say that they liked that song about her eyes. But feminist electro-musician Peaches has a decidedly different opinion. “Betty Davis rocks, and she is a badass!” she says. “She is the original in-control sexual powerhouse and a vocal inspiration!”

Of course, Peaches isn’t referring to the saucer-eyed Hollywood star but instead to Betty Davis, the phenomenal ’70s soul singer who’s influenced everyone from Lil’ Kim and Karen O to Missy Elliott and Ice Cube with her fierce, fearless, blistering sexuality and visionary musicality—think Pam Grier crossed with Jay-Z. Yet chances are you’ve never heard of this other Davis because her records never got mass distribution upon their initial release. But with the reissues of her first two albums, Betty Davis and They Say I’m Different now hitting stores (both on Light in the Attic Records), she’s poised to finally receive the long-overdue recognition she deserves.

Born in 1945 in Pittsburgh, PA, Davis was a loner from the beginning and deeply seduced by the records her grandmother played for her. “She, along with my mother, played a lot of blues music,” she recalls, speaking in a low, precise cadence that alludes to decades of wisdom and a lack of pretention. “Lightnin’ Hopkins, Jimmy Ray, Muddy Waters, B.B. King, Big Mama Thornton—people like that. I appreciated the pureness of the sound.”

In the mid-’60s, at the precocious age of 16, Davis’ fascination with fashion and the burgeoning funk scene led her to New York City. There, she spent her days at the Fashion Institute of Technology and her nights at a club on 90th St. and Broadway called the Cellar. “I really liked clothes, so I got into design,” she recalls. “I majored in apparel design. But I was writing music at the same time—all the time.” Though she was not actively pursuing a music career then, she essentially functioned as the club’s hostess, MC, and DJ, meticulously choosing music, hiring the fashionable dancers, and charming the crowd with her unaffected charisma.

Through the club scene she met attorney Jack Pearl and, in turn, arranger Don Costa, who helped her record a formidable single entitled “Get Ready for Betty.” Cutting that track got her nowhere initially, but it led to a collaboration with the hot-at-the-moment Chambers Brothers, who recorded her song “Uptown.” The song was a significant success for the band. At the same time, Davis began an unintentional modeling career, via her sartorial connections, but it proved to be unfulfilling. “Ah, modeling was boring—you didn’t need a brain. Why bother?” she says.

Still, her timing was good in the fashion world and she regularly found work. But it was ultimately a chance meeting with Miles Davis in a jazz club in 1967 that helped take her musical aspirations to the next level. “It was an accident, really,” she insists. Although he was twice her age, their affair led to a marriage proposal and a serious music education for the 23-year-old. 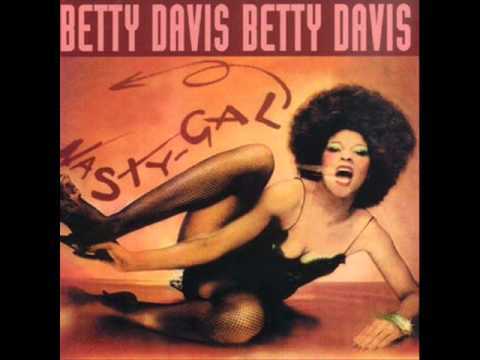 She may have acquired her surname through their brief marriage between 1968 and 1969, but it was also then that Davis developed her skills as a composer. What’s more, she introduced her husband to the pop and rock worlds outside his avant-jazz bubble. “He was exposed to different music, more contemporary music through me,” recalls Davis. “Otis Redding, Sly and the Family Stone, Taj Mahal, Jimi Hendrix. I started arranging music—that’s how he influenced me. I used to listen to a lot of classical music, like Stravinsky and Rachmaninov, when I began arranging, and I stopped writing while I was married to him.” Historically, many credit Davis’ influence for the harder edge that informed Miles Davis’ most revolutionary album, Bitches Brew. Sadly, the relationship was not to last. While Miles wrote in his autobiography that the reason for their separation was the fact that she was “too young and too wild for me,” accusing her of having had an affair with Jimi Hendrix during their marriage, Davis maintains that it was Miles’ notorious temper and violent streak that led to their split.

With a knack for intricate, innovative composition techniques and influential time in the trenches of the N.Y.C. club scene under her belt, Davis headed to the U.K. and ran into Marc Bolan, at the height of his incarnation as T. Rex. Although he was impressed with the songs she played for him and arranged a meeting for her with Essex Music, she ultimately passed and went back to the U.S., this time heading for the West Coast, bringing with her a growing sense of confidence and a new appreciation for the glam rock scene she had been briefly exposed to—both critical conduits to her future successes.

Landing in San Francisco proved the right move for Davis. She found the city a suitable place to expose a broader audience to her music on her own terms. She also hooked up both romantically and creatively with former Sly and the Family Stone drummer Greg Errico, who ended up producing her eponymous debut in 1973. The cover featured Davis clad in shimmering lavender hot pants and thigh-high silver boots, and the sound was a femme-d up version of Funkadelic’s dance-floor directives, shot through with vivid streaks of Davis’ passion for the muscular, primal guitars of Hendrix and Bolan. The eight-song album left little to the erotic imagination, kicking off shamelessly with “If I’m in Luck I Might Get Picked Up,” a brazen, slowly rolling groover that pulled the listener in with a force as subversively seductive as the images on the cover. It’s easy to see why this record has since become such a coveted collector’s item for fans of raunchy soul music with a rock edge, particularly on ribald, deeply infectious tracks like “Anti Love Song” and “Steppin in Her I. Miller Shoes.”

That empowered aesthetic continued on the cover of 1974’s aptly titled They Say I’m Different, which showed our heroine clad in a truly bizarre disco-tribal get-up, wielding three silver javelins. It was an outrageous, imaginative, utterly unprecedented look that sharply conveyed both her avant-garde fashion sense and natural confidence (not unlike an early version of Karen O, albeit a distinctly funkier one). That confidence was even clearer in the control room: this time Errico was out and Davis produced the entire record herself. She took charge of every element of the production, pulling in an almost entirely new cast of musicians, most notably “the Ladies,” a trio of foxy female backup singers that included Trudy Perkins, Elaine Clark, and Debbie Burrell (who was later cast in the original Broadway production of Dreamgirls). Her signature fusion of soulful funk and rough-hewn hard rock continued, but her songwriting was maturing into something leaner, more concise, and light years ahead of its time. Lead track “Shoo-B-Doop and Cop Him” would go on to live as a sample on Ice Cube’s hit “Once Upon a Time in the Projects.” “It’s one of my most requested songs because it was a hit before I used it,” says Cube with obvious admiration. “Betty was a G for real.”

Gangster shout-outs are all fine and good, but the song that perks many a feminist’s ear on that record is “He Was a Big Freak,” an unremorseful diatribe that addresses both the album’s title and the object of her sexual desire (“I used to beat him with a turquoise chain!” she shrieks, with sadistic glee). When asked about the genesis of that song, she will only offer the intriguing qualification that “It’s not about Jimi Hendrix…it’s not…but he sure wore a lot of turquoise.” Whether or not it was inspired by Hendrix (long rumored to be one of Davis’ conquests), the fact that it so beautifully conveys a duality of desire that women were just beginning to claim in those early years of second wave feminism is a testimony to her groundbreaking nature.

“It’s not about Jimi Hendrix…it’s not…but he sure wore a lot of turquoise.”

Following the launch of this strong sophomore effort, Davis booked a series of high-profile shows in New York, L.A., and London that drew a sizable cache of devoted fans, including Richard Pryor and Muhammad Ali, along with industry heavyweights like Island Records’ Chris Blackwell, who signed her for her third record. Sadly, this would prove to be Davis’ high-water mark. That third record, 1975’s Nasty Gal, performed poorly on the charts, and Davis soon found herself without a label but still full of unrealized ambitions. She forged ahead and recorded Crashin’ from Passion, a lost gem that many fans don’t even realize is lost, thanks to the confusing fact that she went back into the studio one last time to re-record a more pop-oriented series of songs under the same title. When neither record helped land her a deal, Davis simply bowed out of the industry and disappeared.

While rumors of mental illness or drug problems have often floated around the mystery of her vanishing, there’s never been anything of substance to validate them. Only Davis herself can explain why she surrendered her dreams after such a promising start, but she’s still not interested in elaborating on it. Now a single 62-year-old living a seemingly content but highly reclusive life in Pennsylvania, Davis is cautiously breaking her silence out of respect for Light in the Attic Records, the label that has been struggling for two years to legitimately reissue those first two seminal records. “When they told me they were rereleasing my music and asked me if I would do interviews, I told them, ‘Yes, but I’m not really interested in doing interviews,’” she says carefully, her voice weathered. “But if it’s done in relationship to something else…to my work...then [it’s OK].” Though she isn’t interested in delving too deeply into the most private elements of her past, she is still engaged with the future, continuing to write her own music occasionally and following contemporary pop music enthusiastically. “Justin Timberlake is good—his lyrics and his phrasing,” she says, “but the music business has changed a great deal; there’s just not as much freedom.”

Images courtest of Light In The Attic Records

17 Albums To Get Obsessed With