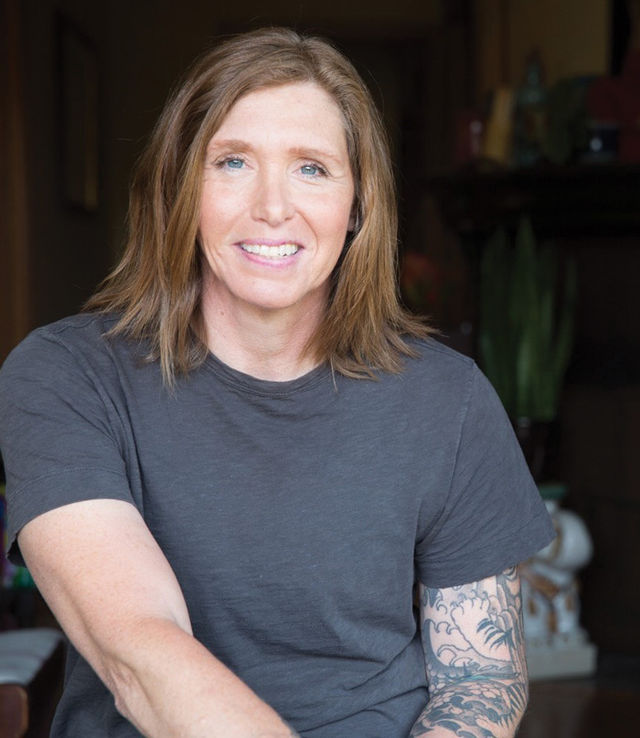 The name Patty Schemel might not be at the top of your list of musicians made famous by the Pacific Northwest’s music eruption of the 1990s, but as far as the “story of grunge” goes, Schemel’s life as the drummer of Courtney Love’s band Hole is crucial. First described in the 2011 documentary Hit So Hard: The Life & Near Death Story of Patty Schemel, her trajectory of fame, addiction, rehab (and rehab, and rehab), and recovery is now the subject of a new memoir, Hit So Hard (Da Capo Press).

The book allows for a more detailed and personal narrative, beginning with Schemel’s small-town upbringing: the awkwardness of puberty and the realization that she was a lesbian; the irony of being born to two recovered alcoholics too caught up in AA to notice their young daughter was drinking; the catharsis of learning to drum at 11. This is followed by her first years in Seattle, in a scene that was about to explode. By the time Schemel joined Hole (and became close friends and roommates with Love and Kurt Cobain), the turbulent ride had begun.

Schemel writes with wit and easy humor, but as her memories grow darker, so do the bleak realities of her addictions to heroin and crack cocaine. You won’t find the typical bloated glorifications of a rock star’s “cocaine ‘n’ limos” days here—Schemel prefers to keep it real, laying out the gritty details of her time living on the streets. Now 12 years clean (working as a dog walker helped her recovery process), Schemel is married with a daughter, teaches drums to kids, and plays in the L.A. bands Death Valley Girls and Upset. Here, she opens up about the female perspective in recovery, playing music again, and the always-prevalent cheesy rock dudes.

I loved the documentary. Did you know you were going to follow it up with a book eventually?

No, not at all! When [the documentary] was complete, I did Q&As after screenings, and there were so many questions afterward—recovery questions, music questions—there was a lot more to talk about.

I imagine there’s a big difference in telling your story through writing versus through film. Was it difficult to go into detail for the book?

I was a little apprehensive at first because it was really difficult to go through the storytelling for the documentary. For the book, it was even more detailed. You go there in your head—you smell the room, you can feel all the stuff. So once again, it was a trip into that time machine. I would leave a session of writing and have to reemerge into the world. It left me so heavy.

There are so many autobiographies by male musicians centered on addiction. Do you think it’s important that the female perspective be represented there?

Yes, exactly. Women get so much more disrespect for being addicts because we’re supposed to be moms, and we’re supposed to be caretakers. Sharing that feeling, that story, in so many rehabs with women—from street-level addicts to the millionaire wives who lost control on their yachts—it’s all the same, we’re all the same, and we all talk about how we need each other. When I read memoirs from recovering rock guys, it’s always like, “There I was, in the limo….” And it’s like, wait a minute, really? Are we gonna do the whole coke on the boobs thing? [laughs]

Was it difficult to play music again after getting sober?

Once I started to play, I started to get back to the original reasons why I like drums. When I left Hole and got clean, I couldn’t be just that person anymore. I was Patty—the drummer of Hole. But there’s a lot more. Now I teach art to kids at a Waldorf school, I do stuff I didn’t know I was good at. Woodworking! [laughs] And that gives me the balance I need so I can do things like writing and drumming and be excited about it because it doesn’t have a bunch of shit attached to it.

Does your daughter have an interest in music?

She does! She goes to rock camp with me every year, even though she’s not of age yet. It’s so important for her to just be around that—a girl laying out her guitar changing the strings, or soldering and fixing a pedal. Just to have that stuff around so it’s not seen as a weird thing that girls don’t do.

Has being a female musician changed from ?the ’90s to now?

I don’t want to be negative, but it’s so fucked up. Those [sexist] things still happen. Like, when we were loading our gear in to play a show, Nicole [Snyder, Upset’s bassist] just set her amp down, and the sound guy was like, “Uh, your amp doesn’t go that way.” It was so condescending. Still! I think—to use a ridiculous metaphor—it’s like we planted a garden in the ’90s. We planted the seeds, but I don’t know, maybe we should have tended to it a little bit better, you know? It’s still happening, but now we just know about it more, which is great.?

Patty Schemel On Drumming, Parenting, And Teaching Girls To Rock

Tags: Hit So Hard , Patty Schemel , music , interview , Hole
Support Feminist Media!
During these troubling political times, independent feminist media is more vital than ever. If our bold, uncensored reporting on women’s issues is important to you, please consider making a donation of $5, $25, $50, or whatever you can afford, to protect and sustain BUST.com.
Thanks so much—we can’t spell BUST without U.