Hurray For The Riff Raff Tells A Story Of Gentrification In A Concept Album: BUST Interview

Details
BY BUST Magazine
IN Music
Published: 24 May 2017 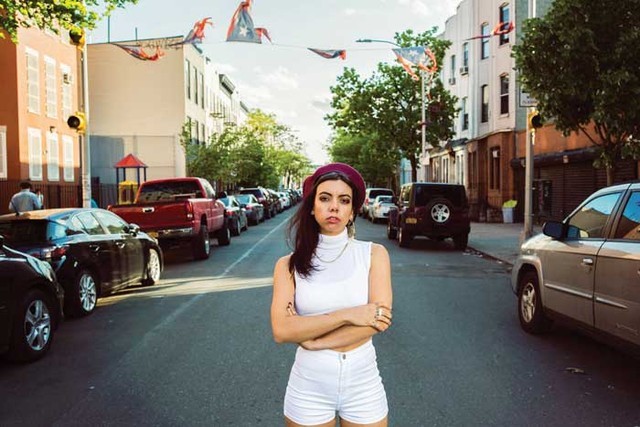 When she was just 17, Alynda Segarra ran away from her home in the Bronx. Since then, she’s been a rambler, frequently on the road playing her unique combination of folk, Americana, and roots rock. Now 30, Segarra is reckoning with where she came from on The Navigator, the newest full-length album from her band Hurray For The Riff Raff. It tells the story of a character named Navita Milagros Negrón, a teen girl from the streets adrift in a rapidly gentrifying city. Segarra spoke to BUST about her ambitious new concept album, embracing her Puerto Rican identity, and using her music to amplify activists.

What inspired this album, and the character of The Navigator?

The character Navi, who I tried to channel to write this album, has a lot to do with growing up in the city. I thought back on my childhood, and just being a “bad kid” who always wanted to be in the street. From age 14 on, I was going to punk shows and getting into the Greenwich Village folk scene. And then, looking back on my experiences as a Puerto Rican woman, and learning a lot about Nuyorican history—the Puerto Ricans who either grew up in New York or came to New York, inspired me a lot to make the album.

In the second half of the album, Navi wants to get away from where she grew up, and get away from her family, and her identity, and the oppression of living in the city. She gets put under this spell where she wakes up 40 years later, and the city has rapidly been gentrified. It’s this dystopian future where everything’s changed so much. She’s still in the same place, but she can’t find anybody.

You dedicated your single, “Rican Beach,” to the water protectors at Standing Rock and the people of Peñuelas in Puerto Rico, where coal ash is contaminating the water supply. How does activism play into your music?

Right now, artists have a very big responsibility. We’re facing really scary times, and it’s becoming obvious that there are some people who would like to make it impossible for artists to criticize the administration. And that’s what our country is about, having the ability to criticize, and to say what we think is serving us or not serving us, [who] we think is fit to represent us or not. Right now, the country is so divided, like we’re two separate countries. I’d like music to bring sanity. These people at Standing Rock, they’re trying to protect water. [laughs] You know? We all need it. This is not a topic that should be politicized, this is a human topic. I would like to amplify the work that activists are doing, and bring some kind of rationality back into our consciousness as Americans, because I feel like we’re going off the rails right now.

Do you consider yourself a feminist? What's your relationship to feminism?

Yeah, I’ve been considering myself a feminist since I was a teenager. Looking back, I had feminist ideals, but I felt afraid to identify myself with that label. I think I was a little brainwashed.

I love that feminism is becoming more of a part of our pop culture. I think we all assumed that we were moving forward. But now it’s obvious that there are a lot of forces that are trying to take us backwards. I want to do as much as I can to keep young women informed, and be somebody who young woman can look to, so I can be, like, “You’re not fucking crazy, actually.” I think we definitely saw backlash this year. I’ve noticed it online. I kind of hate being on the Internet. But I want to bring positivity and love to womankind through music.

It’s so toxic! But you know, sometimes when things get really bad, I remind myself, there is an effort to keep us offline because we’re so powerful, and people are really afraid of us having such a big platform, and having so much information. Like, as much effort as there is to put toxic shit on women online and in the world, it’s like, Oh, that’s because you’re afraid of us. [laughs]