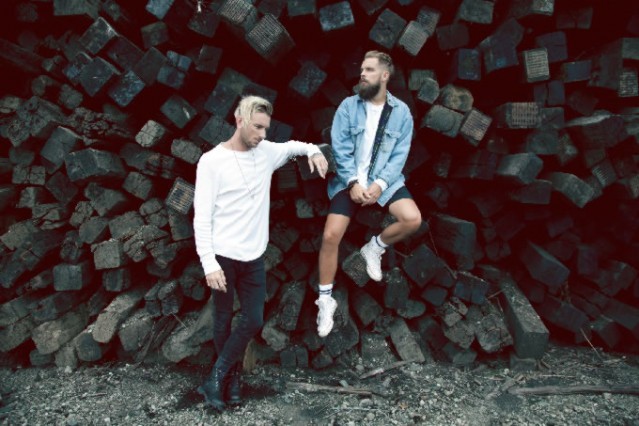 Ivory, the debut full-length from Florida-based duo COLOURS, is out today on Victory Records.

Since their unveiling in November 2015, COLOURS’ music has amassed more than 450,000 streams at Spotify and Apple Music, and has sold more than 4,300 digital singles. Additionally, lead single “Monster”, has 65,000+ video views.

“Over a howling electro-R&B beat, ‘make me your monster,’ they beg. We just might”
- Entertainment Weekly

Haven't seen "Monsters" yet? Check it out, below:

Cool Hunting premiered the album’s most recent single, “Slow,” calling it “a track that will appeal to those who enjoy the conscientious pacing of Twin Shadow and the alt-pop appeal of St. Lucia,” while Pop Matters hailed the song “Lawless” as a “sleek new single.

"[COLOURS is] one of the '100 Bands You Need To Know.'"Alternative Press

With Morgan Alley on drums and Kyle Tamo on vocals, COLOURS entered the studio in early 2015 with producer Shaun Lopez (††† Crosses, Far, Deftones) to record their first full length. Ivory follows their self-released EP Skin and Bones, which prompted Alternative Press to name the band one of the “100 Bands You Need To Know.”

“Atmospheric, dark electro pop and rock, in the vein of Crosses”
Rolling Stone

But if you enter below, you just might be the lucky winner to receive a limited-edition COLOURS t-shirt, poster, Ivory CD, and a special vinyl edition of the release. Just add your email allow to be automatically entered:

No purchase necessary to enter or win. All applicants must be at least 18 years old. Void where prohibited by law. Individual email addresses will be counted as one applicant regardless of number of entries. Prize delivery, is the sole responsibility of the advertiser. BUST magazine is not responsible for loss, breakage, failure of receipt, replacement and/or product similarity to description of prize items. Item carries no warranty or guarantee.

All entries must be received by Midnight of the following Thursday from announcement of contest. Emails entered will be made available to the contest sponsor only, and will not be sold to third parties for use of any kind.

Winner must reply to confirmation of prize award within 7 days of notification from BUST. Failure to comply with this deadline may result in forfeiture of the prize and selection of an alternate winner.

Tags: giveaway , Win , COLOURS , Ivory , Morgan Alley , Kyle Tamo , Shaun Lopez
Support Feminist Media!
During these troubling political times, independent feminist media is more vital than ever. If our bold, uncensored reporting on women’s issues is important to you, please consider making a donation of $5, $25, $50, or whatever you can afford, to protect and sustain BUST.com.
Thanks so much—we can’t spell BUST without U.