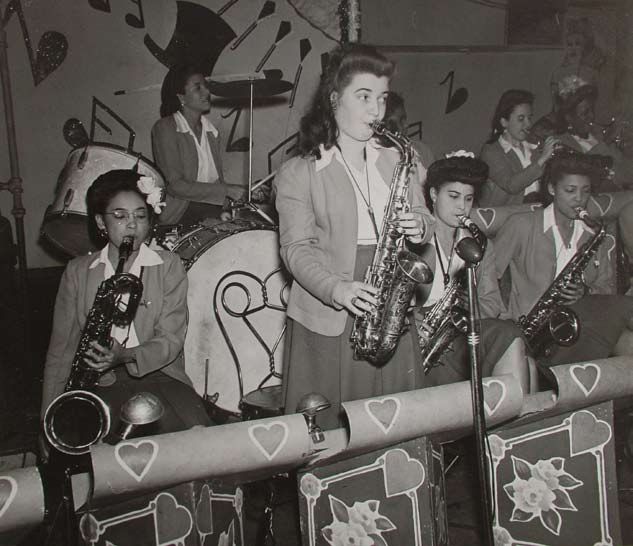 In 1937, The Piney Woods Country Life School, a Christian boarding school for poor and orphaned minority kids in Mississippi, was a humble country spot. But if you walked past it on any afternoon that year, you’d have heard the sounds of jazz, awkwardly rehearsed by more than a dozen young girls. Led by their band teacher, the 14- and 15-year-old musicians would most likely have been struggling to hold their instruments properly and keep a syncopated beat. But this unlikely group eventually became The International Sweethearts of Rhythm, a scandal-causing multiracial band that broke gender and color barriers during the 1930s and ’40s. As World War II tore countries apart, the International Sweethearts of Rhythm brought people together, booking sold-out shows across the globe and driving audiences wild.

The Sweethearts were probably the most beloved all-female band of the Swing Era, thanks to their music skills, racially mixed status, and odd origin. In the midst of the Depression, the Piney Woods School had taken in more students than it had resources to support. Desperate to raise some cash, its principal, Laurence C. Jones, came up with a moneymaking scheme. As his adopted daughter Helen told NPR in 2011, “My father heard [an all-girl swing band] over the radio one time and said, ‘I’ve got a lot of girls [at the school]; maybe I could start myself an all-girl band.’” While most of his students were African-American, like Jones, he thought he could get extra attention by assembling an “international” band—made up of girls from diverse ethnic backgrounds. He enlisted his daughter and some of her Piney Woods classmates—like Alma Cortez and Nova Lee McGee, a Latina and Hawaiian, respectively—to join. When he wanted a “Chinese face” to drive home the band’s worldly look, he recruited a then-15-year-old Willie Mae Lee from a nearby town to play sax, though she had no musical experience. He lured her to Piney Woods with the promise of a scholarship and asked her to change her last name from Lee to Wong, thinking it was more obviously Chinese. 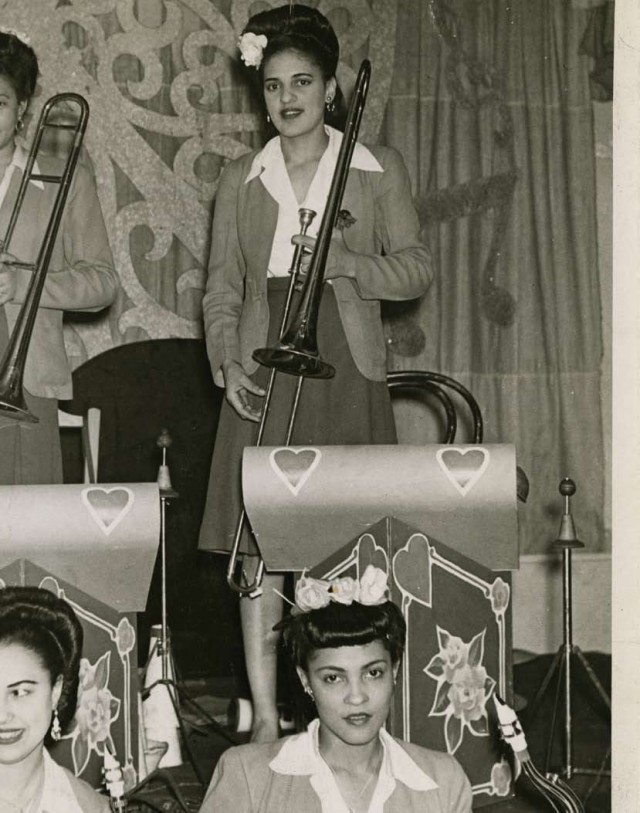 To complete the group, Jones plucked some girls from the Piney Woods marching band and chose others from nearby towns. Many of the original members, especially the Piney Woods students, had never heard jazz before. In fact, as the Sweethearts’ drummer, Pauline Braddy, explained to author Sally Placksin in her book Jazzwomen, “We weren’t supposed to have [jazz albums], ’cause [Piney Woods] was a religious school.” Wong told Sherrie Tucker, author of Swing Shift, “When I left [home], music was foreign to me. I didn’t even have a radio.”

The girls mastered a few basic tunes and began performing around Mississippi. They played community centers and churches, gaining popularity and skills (as well as money for the school) with every performance. In 1939, they took their show on the road; Jones hired a management company to book them in bigger-name halls in neighboring states, and Piney Woods’ male students helped convert a school bus into a tour bus, complete with a study area, dressing rooms, and bunk beds. The latter was especially important, since segregation prevented the racially mixed band from staying in any hotels in the South. Within a year, they were zigzagging across the country, practicing and studying all day and performing shows nightly. They were getting more polished by the day; at the 1939 World’s Fair in N.Y.C., the Sweethearts placed third out of 30 groups in a big-band contest. One journalist raved, “No hotter bunch ever tooted a horn or beat a drum.”

Aside from its diversity, the band’s high-energy style differentiated it from more subdued all-girl outfits. The Sweethearts covered hit songs, reworked jazz standards, and debuted tunes written by their arrangers. Spending hours each day practicing and performing gave these schoolgirls serious skills. Pauline Braddy wasn’t initially the band’s drummer (she was subbed in when the first one dropped out), but after a few years on the road, she earned raves. Said one critic for the Chicago Defender, “This young swing drummer is one of the reasons why the International Sweethearts of Rhythm is by far the most popular girls’ orchestra in the country today.” 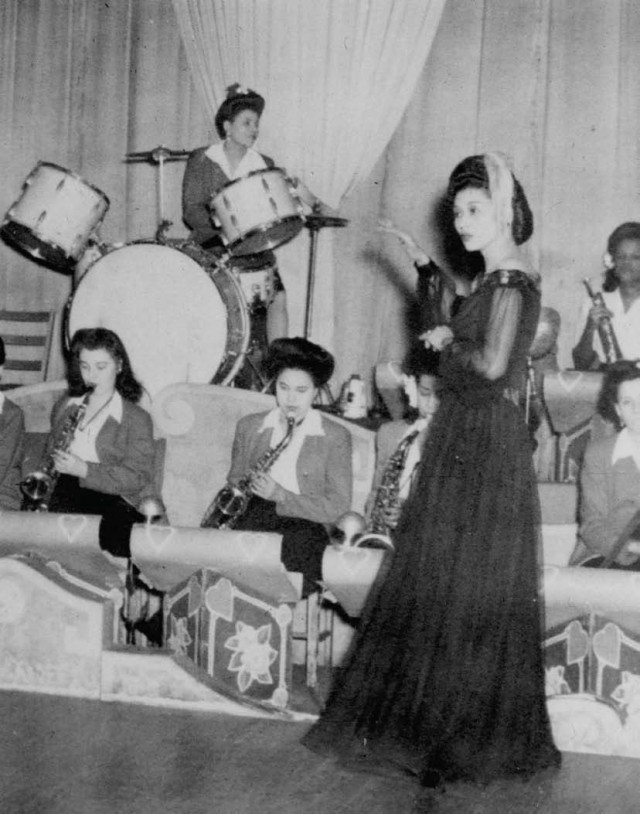 The Sweethearts in concert with Roz Cron on Sax

Audiences went nuts for the Sweethearts. In 1940, the group headlined at Washington, D.C.’s Howard Theatre, smashing box-office records; they once drew 35,000 patrons in a week. Then they won over the notoriously tough audience at Harlem’s Apollo Theater. “When we played our theme song, the audience would get out their seats, dance in the aisles, and they cheered us just like they were cheering the Brooklyn Dodgers,” said saxophonist Rosalind “Roz” Cron in the 1986 documentary International Sweethearts of Rhythm. The press reported on “anxious throngs of rabid jitterbugs” waiting for hours in lines around the block to hear the Sweethearts’ horns wail. But some refused to believe a group of young girls could play so well. Once, audience members accused the Sweethearts of pretending to work their instruments while an unseen male band performed behind a curtain. 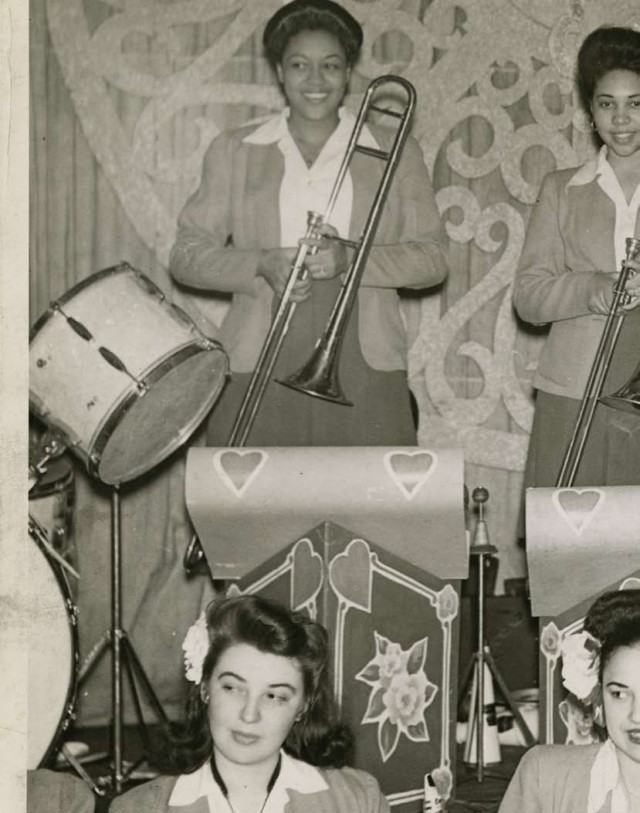 Though they were becoming bona fide successes, the Sweethearts were still naïve country girls at heart, making them prime targets for financial manipulation. At first, they made only $8 a week, despite bringing in $3,000 a month for Piney Woods. “We were extremely underpaid,” vocalist Evelyn McGee told Tucker. “But I was eating three meals a day, and it didn’t bother me that much. In retrospect, I should have been very upset.” As Cron, now 87, recalls, “The original group, they were just teenagers, and they were given a small allowance. Years later, [the band’s managers] even took some of the money the girls earned while touring over-seas. Most of their pay was sent home—the girls were told that it would be put in accounts for them, but the full amount was not there when they came back. It was a terrible case of exploitation.” Even worse, they were spending so much time playing gigs that many of the girls weren’t earning enough credits to graduate high school on time. 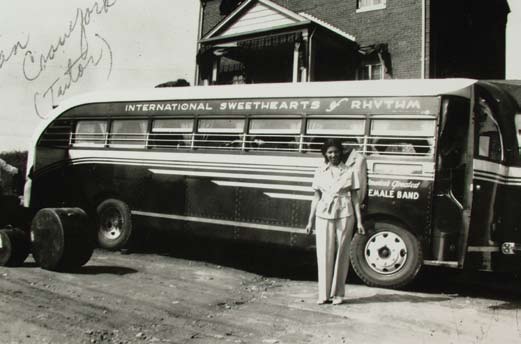 In 1941, relations between the girls and their school worsened, when the school took out insurance policies on them, with Piney Woods as the beneficiary. Fed up, the girls threatened to strike. The Sweethearts’ chaperone Rae Lee Jones found a wealthy benefactor in Arlington, VA, who was willing to take over management of the group and convinced the girls to sever ties with Piney Woods. They stole their tour bus, left the school authorities behind, and made a break for Virginia. (“Girls’ Band Flees Dixie After Tiff with School,” read a 1941 headline in Afro-American.) After Jones reported the theft, the run-aways eluded police in seven states, finally abandoning the bus and driver in Montgomery, AL. Once they’d settled in Arlington, the Sweethearts were no longer affiliated with Piney Woods, and they were ready to enter the big leagues.

Eddie Durham, a trombonist with Count Basie’s band, signed on as bandleader. He ran a tight ship and put the girls on a hectic schedule. Cron recalls, “Most of our days were spent traveling. The only times we stopped were to play theaters, and there would be six or seven days of shows, with five and six shows a day. We had practically no social life. It was constant traveling.” But while days on the road were exhausting, being a racially mixed band in the pre–Civil Rights South was flat-out dangerous. Cron, a Jewish girl from Boston, joined the Sweethearts in 1943, when it was illegal for black men to watch white women perform; she sometimes attempted to “pass” as black by coating her face with dark makeup and tight-perming her hair. But the act didn’t always work—Cron once spent a night in jail for talking with an African-American soldier on the street. She recalls, “My poor manager came down with my so-called ‘cousins,’ two part-white, part-black gals in the band, to bail me out.” She laughs, adding, “I have a record in El Paso, Texas.” But the incident didn’t deter her. As Cron told Tucker, she resolved to “dye my face and hair if I have to, because this is where I want to be—with the best damn female band in America!” 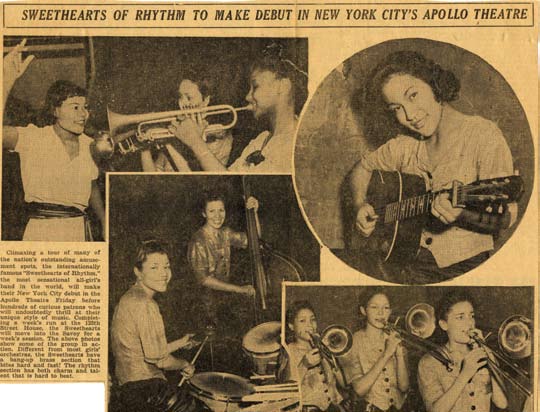 A 1940 ad for the Sweethearts’ big show at the Apollo

Risking jail time wasn’t the only danger for the Sweet-hearts—playing certain shows even put their lives at stake. In 1946, the Ku Klux Klan threatened to kidnap the girls to stop them from performing at a harvest festival in North Carolina. Trumpet player Toby Butler told Tucker, “In one place, we were warned before we got there not to get off the bus, because they had placed firebombs in the dance hall.” But the girls were adamant about continuing to tour. “We knew no color,” said Butler. “We just knew each other and the love of music.”

The Sweethearts relished their brand of jumping jazz, but by the late 1940s, the sound was falling out of fashion. Key members began leaving the group in 1946, some moving on to different bands, others starting families, going to college, and becoming teachers, nurses, or switchboard operators. The Sweethearts disbanded entirely in 1949 (though a revamped version toured from 1950 to 1955). Sadly, few recordings of the Sweethearts survived, and the band is frequently overlooked in accounts of jazz history. In fact, Ken Burns’ 10-part PBS series Jazz gave a mere five-second mention of the Sweethearts and other all-girl bands. And music-history books tend to frame all-female bands simply as wartime replacements for the men who were off serving their country.

Trombonist Helen Jones’ daughter, Cathy Hughes, recalls admiring her mom and her “aunties,” as she called the Sweethearts. “Talented, smart, hardworking—all of the attributes that make for a strong, fulfilled, wonderful woman, I saw in my mother and my aunties.” Hughes traveled with the Sweethearts until she was six years old (when her mom left the band) and looked up to the ladies from front-row seats at their shows. She wasn’t the only girl inspired by the Sweethearts—Hughes says young girls of color left shows knowing that they “could have careers outside of being maids or schoolteachers. [The Sweethearts] existed during a time when black women needed a constant reminder of our worth and our value, and they were the poster girls for that.”

Touring as the Sweethearts gave a gang of small-town Mississippi girls their first taste of freedom and independence. They didn’t ask for much—just some adventure, a bit of money, and the chance to play music with their friends. But these country teens found themselves battling sexism and racism while they unknowingly paved the way for future generations of female musicians. In 2011, more than 70 years since the band’s inception, the six surviving Sweethearts reunited for a panel discussion at the Smithsonian. Now in their 80s and 90s, the women rested their hands quietly in their laps—the same hands that once moved across glittering instruments in some of the biggest clubs in the world. It was time to take another bow.

I'm A Stay-At-Home Mom And I Hate It: BUST True Story

5 First Ladies Who Are Cooler Than Their Husbands