We brought you essays from BUST readers and contributors, including "David Bowie, Jim Henson and the Sexual Awakening Of Millennial Women" by Ali Drucker; "My Life With David Bowie" by Molly Simms; "People Called Me Mrs. David Bowie" by Lillian Ann Slugockwi; and, from the BUST archives, our 2000 interview with Bowie himself — conducted by none other than Iman.

Now, we're saying goodbye to Bowie one last time with a round-up of our art, poetry and short prose submissions from our readers and contributors. Goodbye, David Bowie. Thank you for everything.

From a weird child listening to Ziggy Stardust and finding nothing to do but smile and dance, to the weird teen jumping up to Fame to a wierd adult having serious club face as I danced to every Bowie song holding my drink, David Bowie always has been this unique and beautiful soul that just made me feel like my differencess was just as beautiful. He helped me in so many aspects of my life. It's weird how someone you've never met can impact so many lives. And when something tragic happens, it's like you can feel the millions of hearts breaking including your own. That's how you know that person was a great person. And he truly was. He is stardust. 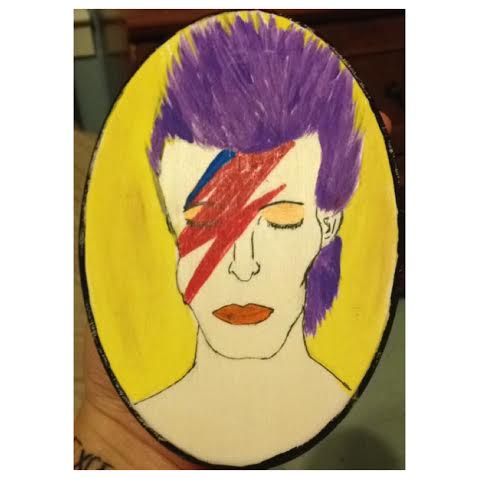 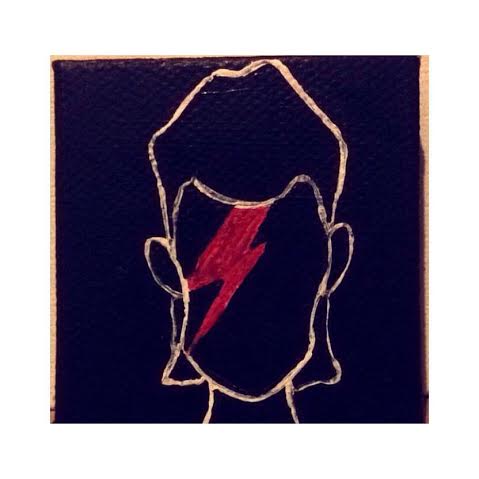 Stephanie D Lopez, an artist from San Antonio that goes by slokita. Growing up different she experienced solitude and bullying. This caused her to submerge herself in a world of imagination through music, movies and art. She sites Bowie as one of her major influences that not only inspired her but built an acceptance to never give into the norm and keep evolving. Her art ranges from custom shoes to abstract to pop culture works. 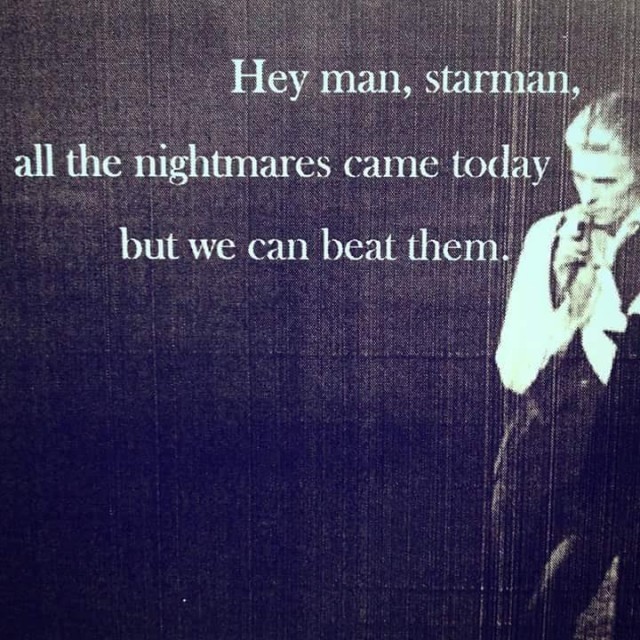 G.M. Palmer lives with his wife and daughters on a poodle farm in Northeast Florida. You can follow him at www.gmpalmer.com and on Twitter at @gm_palmer.

I didn't really listen to him a whole lot until I lived in New York. I already had admired him since I was a kid, but I was twenty-four maybe when I started just sitting down and listening to whole albums. Ziggy Stardust and the other early '70s stuff was, of course, my favorite. It was pretty ridiculous because I felt like I discovered this music that everyone else had already admired for almost forty years, but sometimes I would tell someone about it and realize that they HADN'T ever heard it. I remember walking around in New York with my iPod listening to all of the Ziggy album from beginning to end multiple times a day sometimes. I was really depressed and confused about my life and my identity, and the idea of a bisexual, androgynous, flamboyant, alien rock and roll prophet was just the mythology I needed to keep me going. Of course he never met me, but I felt like he understood me anyway. That sounds so cliched, and it is, and I was really maybe too old to develop this adolescent fixation on a rock star, but I'm not exaggerating when I say that some of my hardest days back then were only bearable because I was listening to David Bowie. I even dyed my hair bright red. I guess I felt so lost inside myself, and I saw in him a small part of what I wanted to be if I could ever get out of my shell. In the stage names and personas and performance art and costumes and makeup, I saw a greater sincerity than I met with in my everyday life and I wanted to find an similar sincerity for myself which I could present to the world, so I could live honestly.

I get really sad when musicians I love die, but it's not a bad kind of sadness. I think it's important to mourn, because it allows us to experience the full range of our emotions, but also because I think in outwardly mourning, we find community, support, and love. I heard a lot of great Bowie tributes at karaoke last night, got a lot of hugs and high-fives, saw a lot of people crying. I think it's wonderful that we all loved him so much, and I will love missing him together.

Let all the children boogie.

Chris Peregrine is a tailor and performance artist from Portland, Oregon. His co-ed dance troupe, Bacchus' Boogiers, performs with bands as well as putting on their own interdimensional happenings. You can follow them on Facebook and Tumblr.

From The Archives: BUST's Interview With David Bowie

Growing Up With David Bowie

Tags: A collection of art , poems and short prose tributes to David Bowie.