From The Archives: BUST's Interview With David Bowie 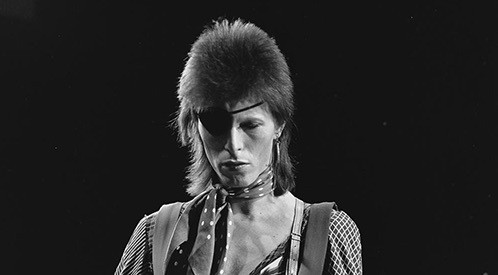 January 10, 2016: We woke up this morning to devastating news: David Bowie passed away yesterday after privately battling cancer for 18 months. He died just two days after his 69th birthday and the release of his 25th studio album, Blackstar. In a Facebook note, producer Tony Visconti wrote that the critically-acclaimed album was an intentional "parting gift" to fans — the single "Lazarus," begins with the line, "Look up here, I'm in Heaven!"

Bowie has always been one of BUST's favorite men, and to honor him, we're going back into our archives to reprint an interview from our Fall 2000 "Men We Love" issue. For the interview, Bowie discussed feminism, masculinity, music and sharing a duvet. 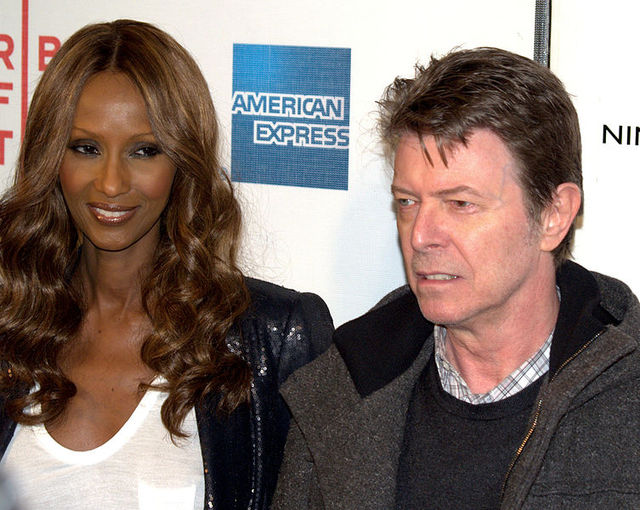 Iman and David Bowie at the 2009 Tribeca Film Festival premiere of Moon, by David Shankbone/Wikimedia Commons

David Bowie is a prince among men, a man whose myriad talents and enduring beauty make you wonder if he really did fall to Earth from some other, more highly evolved planet. So when we discovered that his wife, Iman, was a fan of BUST magazine (she has a very flattering link from her I-IMAN cosmetics website), we were all over her like brown on rice, begging her to allow us access to her husband for our Men We Love issue. The ethereal Iman then did the unthinkable - she granted our wish. There was only one catch; she wanted to interview David herself. And she wanted us to write the questions.

So, write we did. Iman then hand-picked which of our questions she would ask her hubby, and delivered a completely transcribed interview to our email box by the next week. The results are what you see here. Although the couple seem to have rejected most of our questions (including, "What exactly did you mean by 'Suffragette City'?"), their willingness to take even a few moments out of their glamorous lives on behalf of BUST left us feeling like we'd been graced by royalty. Really.

What does the word 'feminism' mean to you?

Not too much anymore, I'm afraid. I've always had immense problems with "movements" or indeed, anything that can be put in quotes. Whatever the current manifesto, the personal definition is always subjective, which is, at the core, the greater reality. In general, I suppose, I find it intensely offensive to see women treated as chattel or appendages. I cannot think of a situation where a woman could not do an equal if not better job than a man. Possibly, a situation requiring only brute strength may be the exception, but here again, a woman would be smart enough to organize the right person for the job. In that singular case, probably a man.

No. I'm stubbornly a nothing-ist. ists and isms irk me. It's a British trait, I fear. We have a traditionally ambivalent outlook on social movements of any kind. But as with all ambivalence it has produced a kind of schizoid overview. A generous acceptance of eccentricity and, at times, an overbearing need to not stand out as being different. A complete understanding of the individual to command his or her own freedom yet a crushing failure to produce a jolly good revolution, even with Tom Paine at the helm.

The glory in that song was ironic. I do not feel that there is anything remotely glorious about being either male or female. I was merely playing on the idea of the colonization of a gender.

Is it better to be one or the other?

That is, in my opinion, an absurd question.

What do you think about machismo?

If you mean Sly Stallone, not very much. Thoroughly silly. If Trevor Howard, then most agreeable.

Do you consider yourself macho in any way?

I could survive in a jungle and I have to shave once a day. Will that do? I think to consider oneself macho is already a signal that one isn't too sure of oneself.

Do you have any close male friends?

Not too many close friends, really. About half a dozen that I would think of as close in the accepted sense, i.e., would I reach out to them in a time of real crisis? Would they reach out to me? The males among that group all go back to my teenage years. Very longstanding friendships. I believe I am a friendly and fairly outgoing person, but I am slow to make close friendships, male or female.

Why do men shy away from being glamorous?

I have no time for glamour. It seems a ridiculous thing to strive for. I couldn't care less. A clean pair of shoes should serve quite well enough.

What didn't you like about Iman at first, that you've grown to love?

The fact that one in four telephone conversations was conducted in Somali, Arabic or Italian. I found it frustrating that I had no idea what she was talking to her friends an family about. Being British, I expect everyone to converse in English. It was something of a rude awakening. Now I enjoy trying to figure out the odd word and I make up my own imagined subject matter.

Of you and Iman, who's the better cook?

Well, I burn water. Iman is a superb cook. Our son and daughter both cook very well. I am stricken with shame that I never bothered to learn. Oh, I could boil an egg. And make radioactive coffee.

What do you think makes relationships between men and women work?

Complete and absolute generosity with the duvet. The realization that the differences between you will be the key to love, as they will become more apparent as the relationship grows. These are the things to be treasured above all else. The similarities will take care of themselves.

Are You A Feminist? Celebrity Answers From BUST's 22-Year Archive May Surprise You