Where Did the Girl Groups Go? Jean Grae Says: Make Your Own 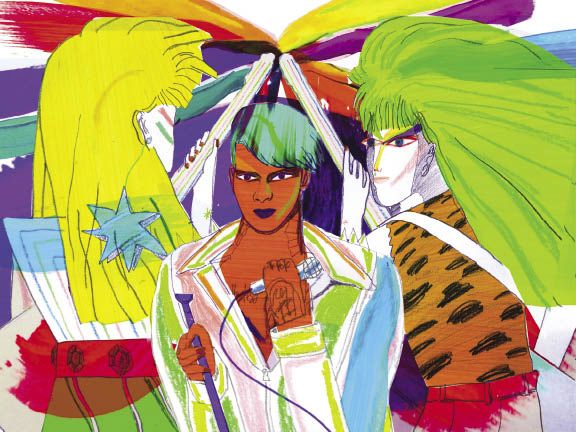 You know who wasn’t truly outrageous? Jem, the ’80s cartoon rock star. She wasn’t outrageous at all. Being all about “synergy” in her band the Hologramsjust made it seem like she was at a board meeting. Wow. How outrageous. You go, Jem. Stormer (of Jem’s rival band, the Misfits) was pretty kickass, though. She played the keytar and wasn’t super cool about the Misfits being dicks to the Holograms all the time. What made her even cooler was her relationship with Kimber from the Holograms. They went off and recorded an album together after feeling unappreciated by their respective bands. I mean, yeah…they went back to them, but only after they both found new levels of badassery for themselves.

These cartoons were a part of my childhood that influenced me greatly. I remember wanting to be in the Misfits, rather than the Holograms. Their outfits were cooler, their songs were better, and quite frankly, that’s a way fucking cooler name for a band. I didn’t want to be Josie or the damn Pussycats, either. I would have punched Melody in the face on many occasions.

So if any young girls are reading this, know that girl groups don’t have to be a thing of the past.

Still though, the idea of the girl group was always so cool to me. The girl groups of today, like—wait…where the hell did the girl groups go? A rock group? An R&B group? No? Don’t bring up indie bands that you know. No. I mean super popular, commercially successful, stadium-playing groups. Groups like the Supremes, the Runaways, the Go-Go’s, En Vogue, and TLC. What the hell happened? Did an asteroid hit the industry and kill them off? We’re left in an era of the solo female artist. The hyper-sexualized, standalone, male-fantasy-fulfilling vision.

We have divas, but we don’t have a group of women together. Even on reality shows that bring singers together, women are always shown attempting to work as a group, but always failing. Geez, I guess women just can’t work as a team. That’s what it feels like they’re telling us. It’s important for young girls to know that it’s not true. It’s important for them to see some of their pop stars as team players. It’s important for them to see women with different personalities, styles, and skills, collaborating in a successful unit. I guess we’re not doing that anymore, and it’s a damn shame. Also, I really miss girl-group choreography and variations of the same outfits, because that’s just awesome anyway.

I’d love to see the girl group return. It doesn’t have to be established powerhouses pretending to be friends for the one song they will ever do—just something fresh. New. So if any young girls are reading this, know that girl groups don’t have to be a thing of the past. Also, if anyone wants to join my group Gen-Pop, I’m looking for four other members. I want to be the quirky one. Oh…and in the outfit variation department, I want to be the one who has studs on everything and only wears crop tops. Let me know if you’re down. I got some sweet-ass choreo planned.

This article originally appeared in the print version of our June/July 2015 issue. Subscribe here.