Folk Goddess Angel Olsen on Jesus and The Creative Process 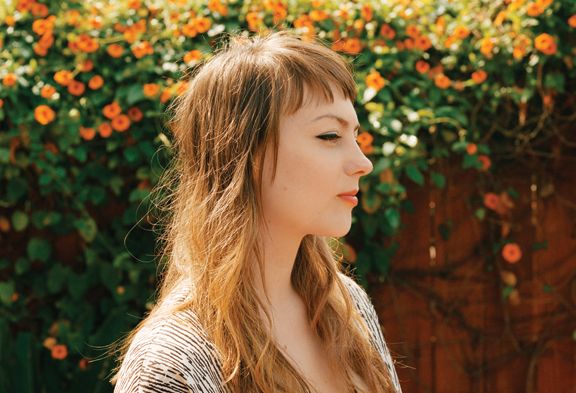 Fans of ethereal folk songstress Angel Olsen may be shocked to learn that her first musical project was a Christian ska-punk band she fronted in high school. “I just sang and ran around on stage like an idiot,” the 27-year-old St. Louis native says, laughing. “I wrote lyrics that I’d probably slap myself for now.” Soon after, Olsen bought an old Airline acoustic guitar, and it wasn’t long before she added a stint in Bonnie “Prince” Billy’s band the Babblers, two solid records, and countless sold-out shows of her own to her résumé.

Olsen’s classic country warble and impressive vocal range have earned her comparisons to Emmylou Harris and Buffy Sainte-Marie, but her influences run far deeper. From the Everly Brothers to Mariah Carey to the Clean, there’s no predicting who or what she may cite as an inspiration. “I believe that everything influences everything,” she says when asked if her Christian upbringing has impacted her work. “I’m sure it did in some way. I don’t know if Jesus Christ influenced my music or not, but we’ll see.”

When it comes to the Midwesterner’s songwriting, one thing is for sure: she’s no stranger to loneliness. Her sophomore release, Burn Your Fire for No Witness (Jagjaguwar Records), lyrically showcases Olsen’s comfort with simply being alone and embracing her own company. But when your music is so in-demand that you’re booked every night for months at a time, it’s easy to feel overwhelmed. So what does she do to clear her head after being crammed in a van for hours? “It’s always nice to go for a walk and find a bookstore,” she says. “Any place where you can go and be quiet.”

With all the well-deserved attention the indie crooner has received, it’d be easy for her to let it go to her head. Yet as heavenly as her gorgeous melodies are, this artist is still as down-to-earth as they come. “Every time I write something, I think, ‘Wow! I’m still able to do this!’” she says. “You never know if it’s going to be the last time. I never know when I’ll write something that’s worth putting on a record.”

Angel Olsen is currently on tour, don't miss this!

This interview originally ran in our June/July 2014 issue

Tags: Jagjaguwar , tour , interview , Jesus , ska , angel olsen , folk music , burn your fire for no witness , christian
Support Feminist Media!
During these troubling political times, independent feminist media is more vital than ever. If our bold, uncensored reporting on women’s issues is important to you, please consider making a donation of $5, $25, $50, or whatever you can afford, to protect and sustain BUST.com.
Thanks so much—we can’t spell BUST without U.