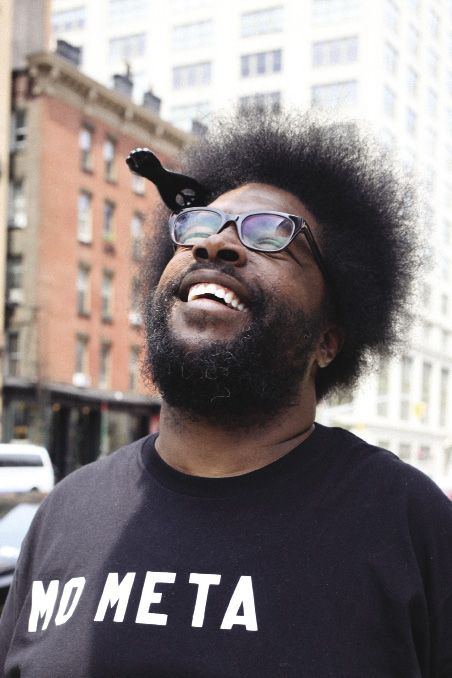 Many have claimed to be “the hardest-working man in show business,” but in the case of drummer Ahmir “Questlove” Thompson, the title may actually be true. “The only things I have time to do are everything I have going on,” he explains between rehearsals for Late Night with Jimmy Fallon in N.Y.C., where as bandleader of the legendary hip-hop/soul group the Roots, he musically directs the coolest house band on TV. “In a 16-hour workday,” he continues, “I somehow manage to score TV shows, record on other people’s records, DJ, and work on Roots stuff.”

"I never had any shame about my nerd-dom. You have to be who you are.”

His most recent “Roots stuff” includes Wise Up Ghost (out September 17), an album the band recorded in their dressing-room-turned-recording-studio with Elvis Costello in sporadic, secret late-night sessions over the course of more than a year. The pairing has been called unlikely, but Questlove says he set his sights on Costello long ago after a conversation with Fallon. “Everyone and their mother will want to work with you,” Fallon told Questlove while pitching his show to the Roots. “One day [our guest will be] Herbie Hancock, and the next day, someone like Elvis Costello.”

Not only has his most visible gig afforded Questlove opportunities like the Costello project, it’s also given him a platform to show the world who he says he really is—a geek with a silly streak. On the show, Questlove regularly appears in sketches like “Downton Sixbey” a sendup of Downton Abbey, and he performs periodically as one-half of the duo “Black Simon and Garfunkel.” “For a long time people thought we were a very serious, frown-on-our-face group,” explains Questlove of his first 20 pre-Fallon years in hip-hop. “You aren’t really allowed to show your humorous side. But I never had any shame about my nerd-dom. You have to be who you are.”

Questlove shares the ups and downs of his transition from hip-hop to TV in his memoir, Mo’ Meta Blues: The World According to Questlove, the first of two books he’s releasing this year. The other is about the variety show Soultrain, and comes out in October.

One would think that with so much accomplished this year already, the eligible bachelor would set aside time for dating, right? Nope. When Fallon takes over The Tonight Show next year, the Roots will stay on as house band, which means a huge immediate task for Questlove. “This is a show that deserves an iconic theme song," he says. "So that’s on my mind 24/7.”

Tags: Music , from the magazine , questlove , the roots