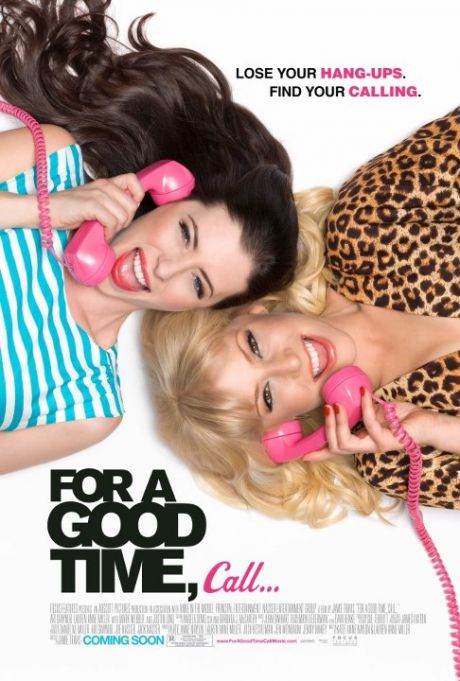 “Just keep it in your room.” That’s what For a Good Time, Call... co-star/co-writer/co-producer Lauren Anne Miller told her then-roommate, Katie Anne Naylon, when Naylon admitted that she held a job as a phone sex operator to earn cash. Nowadays, Miller and Naylon are far from their Florida State University dorm room, but they're still making dirty talk pay: For a Good Time, Call... is loosely based on Naylon’s former occupation, and stars Miller (playing a fictionalized version of herself also named Lauren) and Ari Graynor (who plays Katie in the movie).

Prior to the release of the movie, Miller called BUST to talk about making your own destiny, wrapping raunchiness in an “adorable pink bow,” and her father’s favorite euphemism for a certain male organ.

This is absolutely a movie that my friends and I would have seen together in college and quoted to each other every day. Now we’ve all graduated, so it’s gonna have to be gchat quoting.

That’s what we want. Now you’re too cool and you’re older.

This movie has been your life for years, between the writing and development, production, the shoot itself and post-production, and now press and finally a theatrical release. That’s a lot of buildup. Since it’s an indie, you really have your hands in every aspect.

We wrote the script three years ago and tried to make it in the studio world, but it was a pre-Bridesmaids time. The script was met with so much praise and love; Katie and I probably had 50 or 60 meetings all over town. Everyone loved it, but no one wanted to make it, because they kept saying female R-rated comedies don’t do well. So as the story goes, I was traveling and I was in a hotel room and I had this Lost In Translation moment where it was like, “What am I doing with my life?”

As far as acting goes, it was something I’d been trying to do for a long time and it was going truly nowhere. The year before Sundance, I’d had five auditions. In a year! I just had this moment where I was like, “You know what, if this is ever going to happen for me, I’m going to make it happen for myself.”

I’m a big believer in making your own destiny and taking control of your life, so I sent Katie this email and said, “Look, we have this script and the character is based on me, her name is Lauren, and I know we can do it. We’ll make it on our own and we’ll produce it and maybe Ari Graynor will be in it, and maybe it’ll be at Sundance next year, and that’s what we’re gonna do!” And that’s what happened! I keep saying I need to email Katie again and say, “And then we’re gonna win the lottery!”

So you wrote the part of Katie specifically for Ari Graynor after seeing her as the drunk best friend in Nick and Norah’s Infinite Playlist.

I didn’t see it right when it came out, I saw it a few months later. I was out traveling and I watched it in a hotel room. I never forgot about it. Years passed, and I never forgot about what an incredible and truly inspired performance she gave for this supporting character.

So when we sat down to write the script, we had it in our heads of how great she would be [as the lead]. But we were gonna make the movie in the studio world, we weren’t allowed to send the script to her, which is insane, because you’ve seen it: No one could play that part but her! But it wasn’t the case. That moment that we decided to make it on our own, she was the very first step.


I loved her in that movie too. She should be way more famous than she is.

Right? Well, I’m sure after this, she will be. I told her, you’ll never be able to go to The Grove [mall in L.A.] again.

You said that studio execs turned their noses up at R-rated, female-led comedies. Now, we not only have your movie and Bridesmaids, but Bachelorette and so many others. Do you just want to run back there and give the studios the what-for now?

It’s interesting, because the script, we wrote it three years ago, before Bridesmaids was even shot. And I think that movies go in trends. In the ‘80s there was an incredible boom of female comedies, with Bette Midler and Shelley Long and all of those talented women. But that sort of wave subsided for a while, and then there were kind of amazing romantic comedies that were kind of about women getting the guy.

That’s great, and I love those movies as much as anyone else, but I also wanted to be a movie that wasn’t about that and was just about females being powerful and being friends and being individuals and really explore that delicate intense relationship that can be female friendship. We’re excited that Bridesmaids sort of opened the door and proved that there was an audience for these movies, and we’re just excited to be a part of it and hope to keep doing it.

Are you going to ride that wave, then? Are you and Katie working on anything now?

Yes, I want to continue writing these movies. I’m working on some stuff, nothing I can talk about, I’m sorry. We do have a lot of ideas, and hopefully we’ll continue these female stories not just about finding a guy and not just about falling down. 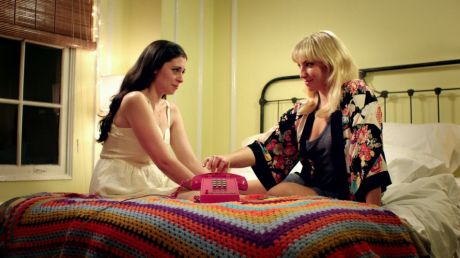 The movie focuses on the friendship between Katie and Lauren, but each of them have a romantic entanglement plot. Was there ever a version of the movie that didn’t have a male love interest at all, or was there always a romantic element?

I think we found the perfect balance, because I think that females, we are romantic, and we love romances and love. It was so important for Ari’s character, Katie, to explore that romantic world and her feelings and her emotions in that way. It’s Lauren who helps Katie become someone who is open to a romantic relationship, because she couldn’t before.

Do you think there will ever be a movie about women that doesn’t have a romantic plot element?

I definitely think there could, for sure, absolutely. Maybe we’ll write it. Women go to the movies too. We want to see movies about us, just like anyone wants to see a movie about themselves. Also, I think movies are an amazing way to take a break from reality and that can be done in so many different ways. It could be incredible to have a movie that’s just about friendship, and I would hope that it would be accepted the same way that our movie has been accepted. I think it would be great.


There were a lot of little ‘80s touches in this, from Ari’s omnipresent jumpsuits to the hot pink rotary phones and other things, but it’s set in the present and there’s a very millennial quality to it too -- the whole DIY small business idea, single girls living in the city, all that. What’s behind the retro detailing?

I think that while our movie is somewhat realistic, we created a world here. I credit that entirely to [director] Jamie [Travis], who really is the one who gave the movie its look, and our amazing designer Sue Tebbutt, and our amazing costume designer Maya Lieberman. They were the ones who really brought this world alive.

We were really influenced by movies in the ‘80s, that was part of it. It was Jamie who had the idea, this is Katie’s grandmother’s apartment, maybe she’ll wear some of her grandmother’s clothes and be a little Mrs. Wilper. Maya was the one who was like, “These are girls, let’s make them as cute as possible in this candy-colored world.”

I think that it’s part of also why our movie is accessible. It has that raunchy, that sexy, that bawdiness to it, but because it comes in that adorable pink bow, it becomes more accessible for people who may shy away from it if it were just this gritty tale.

In the movie, your character Lauren is shocked to discover that her new roommate Katie has a night job as a phone sex operator. Of course, this is based on real-life Lauren, you, and real-life Katie, your college roommate who also co-wrote and co-produced the movie with you. What was your reaction to finding out that real-life Katie was talking dirty for money?

Katie did phone sex out of her freshman year dorm room at Florida State, which she told me when we lived together the following year. She came into my room one night clutching her pink fliers and she told me all about it and she said she may start doing it again, working for another company. It was interesting for me. I’m not as judgemental as movie Lauren and I was like, “Look, if that’s what you wanna do, then do it, but I don’t want to hear about it. Keep it in your room.” I’m a big believer in doing what makes you happy and what works for you and that’s what worked for Katie in college. It was a great story for her to tell always, and the perfect place to set our movie.


In the movie, you eventually take up a rotary phone of your own. Did you ever try it in college?

No, I never did! I hate being so disappointing in giving that answer, but I did not. Much to my husband’s displeasure, I did not.

Did Katie ever coach you on how to do phone sex for the movie?

Well, I’d heard enough about it over the years that I had a pretty good idea, but the movie’s not a phone sex documentary in any way shape or form. It wasn’t about being true to the calls that she had way back then or phone sex calls that are happening now, it was about being funny and entertaining and realizing what the locations that our characters are in and who are playing them, and how to turn our audience on with laughter, not with sex. 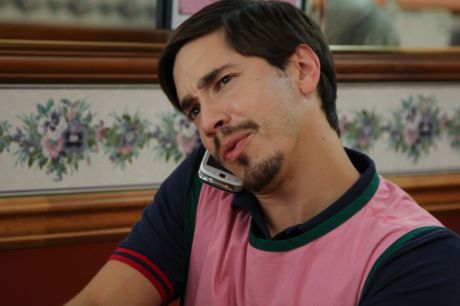 Did you take any souvenirs from the set? 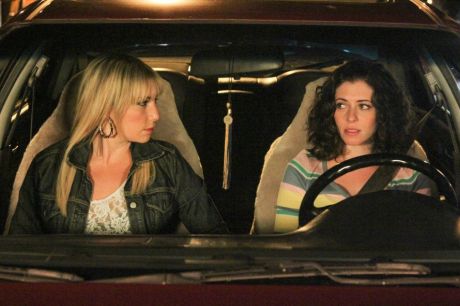 In the movie, your character is mortified when her parents find out that she’s a phone sex operator. How did your parents react to you spending years of your life writing a movie about talking dirty?

I sent the script to my dad early on in the writing process, because he’s a big movie fan, and I really wanted to get his thoughts and he really wanted to read it. It was like oh god oh god we’re sending it to my dad. His notes in the script were that we weren’t being creative enough with the terms for penis. He put a list of suggestions in there. I was like, “Oh God, Dad, please stop talking like this!”

What did he suggest?

He really wanted “schvantz” in there.