Movie Review: Won't Back Down 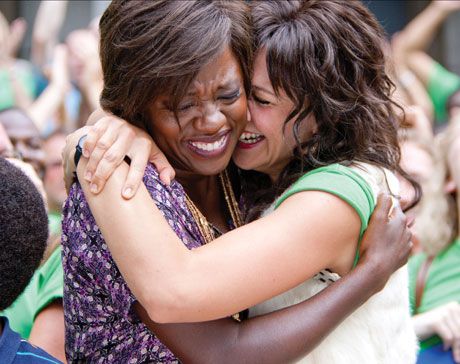 Daniel Barnz directs this narrative sister to the school-reform doc Waiting for Superman, starring Maggie Gyllenhaal and Viola Davis as two Pittsburgh mothers who want to fix their kids’ failing elementary school. Gyllenhaal plays an Erin Brockovich-like character with tattoos, heels, and an “I’m not an activist, I’m just a mom working two jobs” mentality. Her daughter is dyslexic, but neither her child’s tenured teacher nor the administration offer any help. So she turns to another teacher at the school (Viola Davis) who also has a struggling child for support.

As the women begin their turnaround campaign, some of their dialogue becomes didactic. But Davis’ character grows more dynamic as she touchingly grapples with the legacy of her mother, a woman who changed the lives of countless people in her community.

Thankfully, the film doesn’t offer up a one-sided view of education reform, demonize unions, or frame charter schools as the only answer to failing public education. Important arguments get their say—for one, that unions get pitted against parents by those who want to end organized labor and privatize public education, or that charters fail children just like public schools do. But Won’t Back Down doesn’t address the effects of  institutional racism or poverty on young learners.

The love Gyllenhaal and Davis have for their kids is the most moving part of this story, driving home the fact that community organizing can be successful. This film is worth a watch—and a debate afterwards.

This review appears in the Aug/Sept 2012 issue of BUST Magazine with cover girl Tavi Gevinson. Subscribe now.
Tags: Maggie Gyllenhaal , movie review , movie , viola davis
Support Feminist Media!
During these troubling political times, independent feminist media is more vital than ever. If our bold, uncensored reporting on women’s issues is important to you, please consider making a donation of $5, $25, $50, or whatever you can afford, to protect and sustain BUST.com.
Thanks so much—we can’t spell BUST without U.