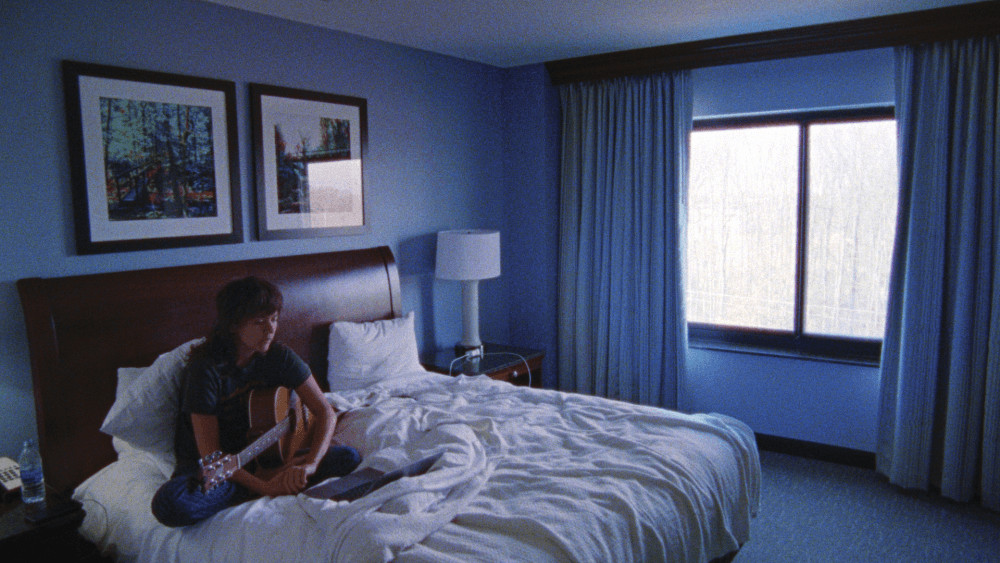 Notoriously shy artist Courtney Barnett lays herself bare in Anonymous Club, a documentary following her personal and professional evolution. Serving as a meditation on loneliness, expectations, and the existential dread brought about by the climate crisis—specifically the Australian bush fires of 2019 and 2020—this film resonates beyond music preferences. In both her songs and her conversations, Barnett echoes the fear, ennui, and unmooring of many around the world.

Filmmaker Danny Cohen first tasked Barnett with keeping an audio diary as a means of facilitating an unparalleled look into her inspirations, concerns, creative process, and idiosyncrasies. Paired with vivid 16-millimeter video footage, these recordings serve as a voiceover for much of the film, allowing us to see montages of her experiences while listening in on her perspectives. Several moments of the film let us see just how much of herself Barnett gives when performing and writing. In a moment of unadulterated vulnerability, Barnett breaks down and cries on stage during a performance. Despite the audience’s support, she records fearing feeling ungrateful and misunderstood. Later, she embarks on a series of stripped-down solo shows in search of a reset. Barnett discovers that the remedy to this incessant despair, and its effect on her confidence and ability to produce music that she finds meaningful, is intimacy and connection.

In creating her subsequent album, Tell Me How You Really Feel, she states, “This album is a lot more kind of gentle, open, and these songs focus on love of…being a loving person.” The relationships Barnett forges—with her audience, her bandmates, and Cohen—are the magic ingredient that captivates and endears the viewer.

In a cheeky moment, Cohen remarks that he “can’t tell which is the real Courtney” upon displaying her self-portrait on ink and cardboard. It’s a small bit of levity that reinforces Barnett’s journey to see herself completely. Ultimately, Barnett affirms for us that self-doubt and introspection are intrinsic to our humanity, and therefore fundamental to our ability to create art that resonates with an audience. With this outlook, she has crafted "Here and There," a touring festival for late summer 2022 that will feature artists she is personally inspired by, such as Sleater-Kinney, Caroline Rose, and Japanese Breakfast. She concludes that “there’s good things ahead, there’s good things coming, and there’s good things in the past, and you just have to take them, build on them, and rearrange them to get where you wanna get in the future.”

Anonymous Club is available for rental on Amazon Prime.

Tags: Courtney Barnett , Danny Cohen , Anonymous Club , Documentary , Singer/songwriter
Support Feminist Media!
During these troubling political times, independent feminist media is more vital than ever. If our bold, uncensored reporting on women’s issues is important to you, please consider making a donation of $5, $25, $50, or whatever you can afford, to protect and sustain BUST.com.
Thanks so much—we can’t spell BUST without U.