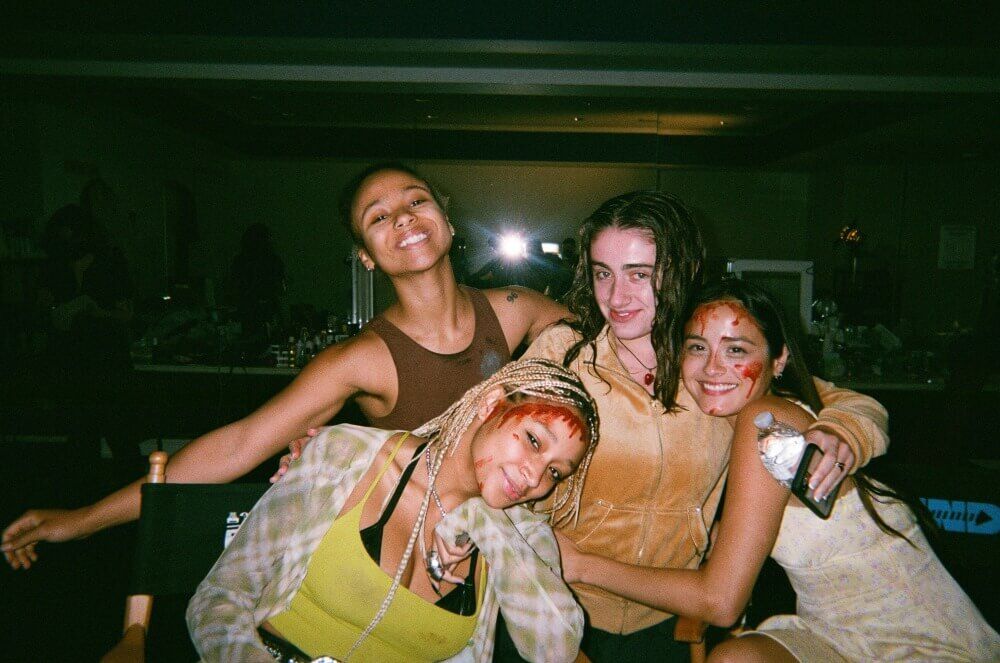 The new horror comedy, Bodies, Bodies, Bodies, was written and produced by Sara DeLappe, directed by Dutch filmmaker, Halina Reijn. and stars the ubiquitous Pete Davidson, Amandla Stenberg, and Maria Bakalova (from Borat: Subsequent Movie Film). The film follows a young couple visiting their group of friends, with whom they drink excessively, eat cake laced with weed, and play a game called “Bodies, Bodies, Bodies.” The aim of the game is to turn off all the lights and “tag you’re it” each other to signify that a person has died. When one of them actually does, chaos ensues.

The film begins with the two main characters, Bee (Bakalova) and Sophie (Stenberg) exchanging loving kisses before continuing on their journey for a weekend away to Sophie’s former schoolmate’s house. Bee and Sophie turn up uninvited to the party and each character’s unique form of narcissism is presented in an incredibly crafted way that is subtle, relatable, and hilarious. The dialogue between the characters is oddly familiar in its regurgitation of modern popular culture and our reliance on technology; the characters use their phones as flashlights to escape a killer on the loose, and their conversations are liberally sprinkled with phrases like “I’m an ally,” “triggered” and “my podcast.”

By juxtaposing this current, politically correct terminology with  the very real threat of impending doom as the characters are massacred one by one, DeLappe slyly critiques pop culture by presenting these terms in life or death circumstances. Here is a scene from the film which displays just that regarding one of the character’s illustrious career of having her own podcast:

Director Reijn aids in the criticism of current Gen Z culture in a breakdown of the first meeting scene between Bee and the other characters. She makes use  of a pool as a unique way to introduce Sophie’s group of nefarious friends. As Reijn explains, “We introduce them in a swimming pool. They’re like embryos floating,” she said. “It’s an abstraction, and then we know that they’re going to be born, and they turn out to be monsters later.”

This masterpiece of a satire provides thought-provoking commentary on how young people conduct themselves today, rely on recycled information for their personal beliefs, and lack the ability to cope without the consistent use of technology, all while maintaining both comedic relief and moments of pure terror. If you haven’t already seen it, Bodies, Bodies, Bodies it’s a must-see this fall.

Photo, top: Courtesy of A24 Films