Jodie Comer Serves Up A Revolutionary Performance In "Prima Facie," A Must-See As Women's Rights Continue To Be Attacked 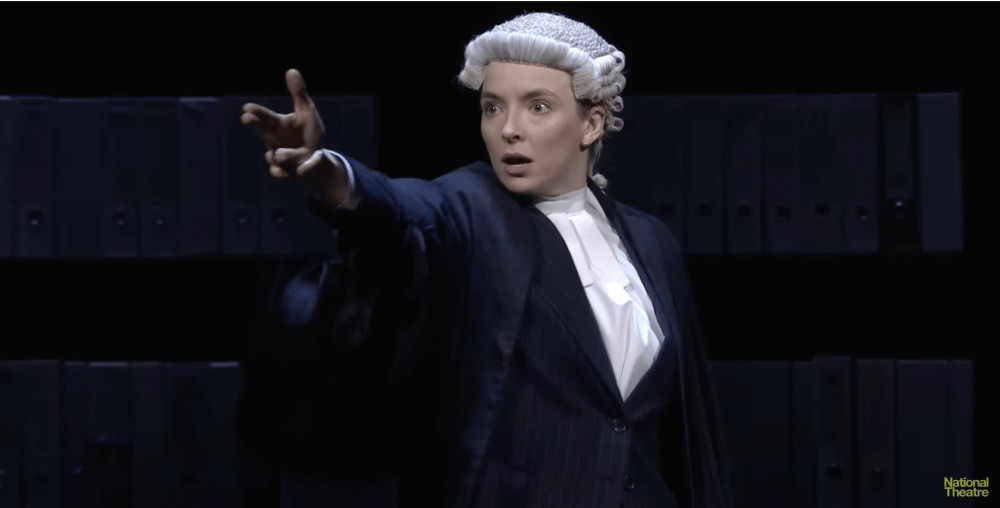 In an age where women’s rights are being negotiated, threatened, and in some cases revoked entirely, Jodie Comer’s astonishing performance in the recording of the play Prima Facie is incredibly relevant and timely. Named after the legal term “prima facie” which means that there is enough evidence to establish something as fact until proven otherwise, this play explores how sexual assault cases are handled by the justice system. In the wake of the SCOTUS’ overruling of Roe v. Wade, the discussion that this play promotes is incredibly necessary and vital. Having just completed a successful nine-week run at the Harold Pinter Theatre in London, it was recently announced that the play will move to Broadway in the Spring of 2023.

In this ground-breaking one-woman show, Comer, an English actor known for her work in Killing Eve (2018-2022), Free Guy (2021), and The Last Duel (2021), portrays Tessa Ensler, a young, bloodthirsty barrister (the British version of an attorney) from Liverpool who attends Cambridge Law School and like a chameleon, morphs to fit in with her posh peers. Ensler is a barracuda - a sharp, fierce, and ferocious woman who thrives in the courtroom and loves nothing more than the sweet taste of victory. Ensler defends men who have been accused of sexual assault and always wins. Comer opens the show by giving the audience a play-by-play of how she methodically tears down women who claim to have been sexually assaulted. Later on, the play takes a dramatic turn, and Ensler herself becomes a rape victim and consequently, her perspective drastically changes. The first half of the show is a master-class-esque crash course on how Ensler became the ruthless lawyer we met at the start. The second half is Ensler’s reckoning as a barrister, her journey to obtaining justice as a victim, and her quest to come to terms with being a survivor of sexual violence.

Throughout the play, Comer’s performance is almost manic, as she is constantly re-arranging the set to accommodate her needs as an actress and tirelessly darting across the stage this way and that throughout the show. She is full of boundless energy, showing incredible emotional range as she transitions from a persuasive, confident lawyer to a shattered woman who is trying to pick up the pieces of her life. Comer’s exhilarating portrayal of a savage barrister who will stop at nothing to achieve victory is both arresting and terrifying. From the very moment she steps on stage, before she even utters a word, Comer’s presence and vitality captures audiences immediately and manages to hold our attention in a fierce grip for over two hours. In this one-woman show, she successfully portrays multiple different characters and their various perspectives while keeping Tessa's character strong and clear.

While the overall plot of the show is brilliant, at times the writing felt muddled. Prima Facie mainly consists of long, rambling monologues that detail multiple different perspectives, including her mother, best friend Mia, and her rapist Julian. In rare instances, these monologues are interrupted by startling moments of clarity for both Ensler and the audience. Miller’s writing was such that Tessa’s dialogue felt like a never-ending run-on sentence. Prima Facie is like a runaway train barreling down the tracks, often nearly veering off-course. While Comer’s persuasive and charismatic performance helps to keep the train on track to its destination, the rambling dialogue and confusing script threatens to derail the show and muddles its message. In addition to this, the experience of seeing the show on film instead of live in the theater didn’t feel as powerful as it could have. The thrum of the ever-present energy that is always in the air in the theater was absent, and something I missed.

Overall, Prima Facie is enthralling, sickening, horrifying, and inspiring. Comer’s magnetic performance hooks us in and refuses to let go, while the statistics about how often sexual violence occurs and how little justice is served makes us queasy and frightened. According to RAINN, in the US, "out of 1,000 cases of sexual assault, only 310 are reported to the police, and subsequently, only 25 perpetrators are incarcerated." Ensler’s change of heart and change of mission, in her quest to find justice for herself and for other women is inspiring. The show sparks a long-overdue discussion about sexual assault and how it is handled by our justice system. According to The Office For National Statistics, in England and Wales in 2021 "sexual offences recorded by the police were at the highest level recorded within a 12-month period (170,973 offences)." In 2021 alone there were 63,136 reported cases of rape, and only 1.3% of cases were prosecuted. The play sheds light on how the justice system in the UK was set up by men to protect men, and as it stands women are vulnerable to manipulation and abuse. Despite the fact that Prima Facie is a British play that takes place in London's courtrooms, the deep-rooted problems in the justice system are universal.

You can see Comer's performance in Prima Facie in select cinemas worldwide. Tickets for the Spring 2023 Broadway showings aren't on sale yet, but you can sign up for alerts for when they are.