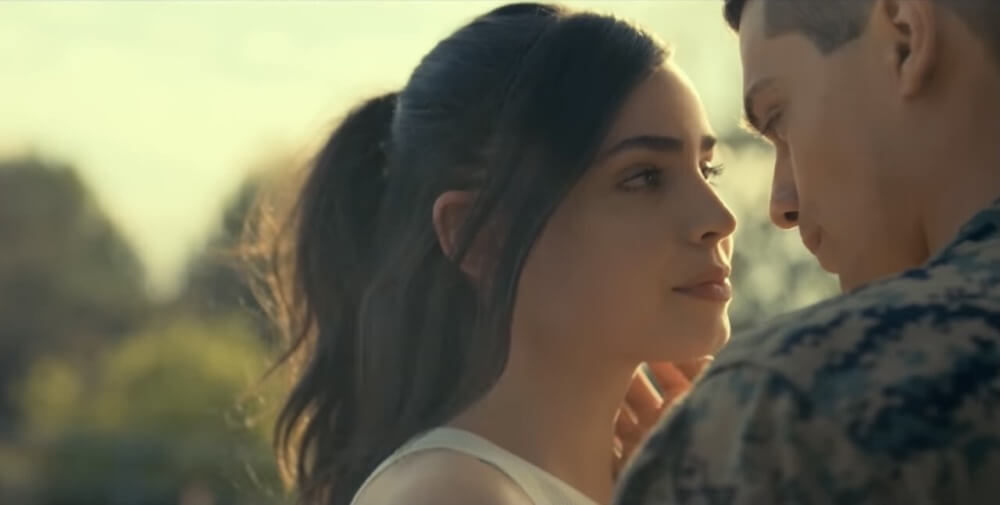 Purple Hearts is an enemies-to-lovers romance about a liberal musician and a conservative marine. When Cassie, a singer-songwriter, finds out that her insurance doesn’t cover the insulin that she needs as a type 1 diabetic, she asks her marine best friend to marry her for the military spouse benefits. He can’t oblige because of his girlfriend, but his roommate, Luke overhears the conversation and realizes that marrying Cassie will afford him enough extra pay while serving to pay off his debts to his old drug dealer. Although Luke is conflicted over this decision because his dad worked for the military police and had taught him that lying to and/or taking advantage of the government is a serious misdeed, he marries her to protect his family from violence from his old dealer, Johnno. Obviously, Cassie and Luke fall in love (for real) and she runs to him, confessing her love as he is arrested by the military police for faking their marriage. This might sound cliche, overdone and predictable. It certainly is, but there’s nothing wrong with feel-good entertainment that may not reinvent the wheel, that makes audiences smile and feel content with a cozy happy ending. There is, however, A LOT wrong with Purple Hearts. We watched it so you don’t have to, and we were left with three glaring questions,

1. When did Netflix start producing military propaganda? Showing soldiers getting deployed and landing in a picturesque village where they play soccer with the local children who smile at them in awe lends itself nicely to a narrative of American saviorism in the military. At home, Cassie, a former critic of the military, later writes a song about her adoration of the troops. This sends the message that if you criticize the military’s practices, you clearly just don’t understand it and all of that apprehension will go away when you fall in love with your fake husband after he’s deployed. Celebrating those who serve is a good thing, but Purple Hearts took some strange stabs at romanticizing the institution as a whole.

2. Can we separate a person from their political ideology? Purple Hearts says yes. This movie has a thinly veiled message of “why can’t we all just get along?” However, the protagonists’ ideological differences are intertwined with theirs and their loved ones’ identities. Cassie’s mom came to the US as an undocumented immigrant, and Luke loves a nice secure border. Cassie is non-white, Luke defends his fellow marines who yell promises of ethnic cleansing in a crowded restaurant. For people with non-dominant identities, being “apolitical” and being swept away by passion for someone who doesn’t think your mom deserved safe entry to the country is a privilege they can’t afford.

3. Do women with opinions need to be fixed to be happy? Purple Hearts emphatically says yes. Enemies to lovers is all about both parties compromising and adopting parts of the other’s lifestyle to make their relationship work. Cassie lets the other marines get away with racism and misogyny, becomes a rock star mascot of the troops, and becomes the perfect military wife. She lets go of a lot of her fire to fit nicely into Luke’s world. But what does Luke compromise or sacrifice in the name of love? He goes to military prison and lies to the court, saying that Cassie didn’t know that a fake marriage like this was illegal under military law and that he coerced her into it, to ensure that she doesn’t serve any time (which would’ve been a more impressive gesture if he wasn’t the sole reason that they got caught). He doesn’t compromise his values for the relationship, and yet Cassie is expected to. Teenage girls are eating this movie up, and this message is…not great.

Purple Hearts has been sitting comfortably in Netflix’s top 10 most popular movies in the US since its release on July 29th. As the controversy around it rises, the viewership is only going up. Does Purple Hearts signify the start of a trend of love stories for a politically divided country, or will the criticism it’s garnered deter other filmmakers from touching the genre? After watching this movie, we are hoping for the latter.