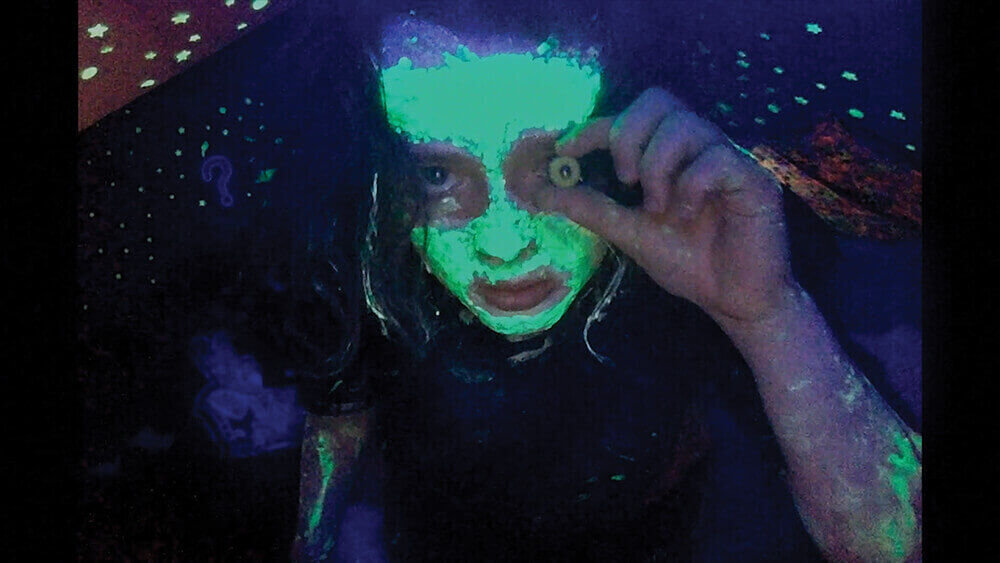 We’re All Going to the World’s Fair

Written and directed by Jane Schoenbrun

Writer/director/editor Jane Schoenbrun’s feature debut, We’re All Going to the World’s Fair, is a harrowing peek into teenage isolation and the pervasive power of the Internet.

Casey (Anna Cobb) is embarking upon the “World’s Fair Challenge,” an online horror game that triggers mysterious transformations in the player. Creepypasta-style videos featuring real YouTube content creators document graphic physical and psychological transitions, but the viewer is left wondering how much of Casey’s transformation is real and how much is for the benefit of those who stumble across her videos.

This slow-burn story makes great use of webcam footage shot in Casey’s attic bedroom, which is decorated with glow-in-the-dark stars and blacklight paint, contrasted against snowy, lonely scenes of the mundane world. The only person Casey directly communicates with is via Skype; JLB, played by horror veteran Michael J. Rogers, uses an eerie illustrated avatar in lieu of his real face, all of which gives an unsettling subtext to his guidance and concern when it’s revealed that he’s much older than the baby-faced girl.

Cobb’s raw talent is hard to deny, especially after a freak-out sequence sure to make many “scariest moments” listicles. Both the filmmaking and her performance give the film a sense of chilling authenticity that lingers long after the credits roll. Instead of offering quick jump scares or more traditional gore, Schoenbrun’s film forces us to look inward. The less you know about this one the better, but it’s sure to leave you reeling. –Danielle Ryan