Lucille Ball and Desi Arnaz were TV pioneers. Ball, a B-movie actress turned comedy legend, and Arnaz, a Cuban-American refugee and musician turned producer extraordinaire–fell in love with each other on a movie set, and against all odds got married and portrayed one of the first mixed race couples on TV at the time, in I Love Lucy. Mind you, this was in the ‘50s. At a time when sexism and racism was far from taboo and proudly showcased on the quilt of American culture, the female-led, multicultural sitcom was nothing short of groundbreaking. Not only was a woman the lead character, but a Latino man with an accent was playing her husband. The IRL couple exposed the country to what a more inclusive America could be. The Ricardos (their TV family name) were beloved and welcomed into living rooms across the nation. It's no secret the real life couple made an impact on the entertainment industry, but behind every game-changing celeb power couple, is a very real pair of humans.

“To the rest of the world, a Hollywood couple has no problems. Of course we do, but I don’t think they believe it. If we have a house, two cars, and a pool, what the hell problem have we got?” Lucille Ball said, referring to the couple’s complicated relationship. “It’s too bad Lucille and Desi weren’t Lucy and Ricky,” Desi Arnaz added.

Amy Poehler’s documentary directorial debut, Lucy and Desi, is full of memorable soundbites like that one. The film, which is available to stream on Amazon Prime, offers a more intimate look into the lives of these TV legends. When filmmaker and executive producer Ron Howard approached Poehler about directing the film, she took advantage of the opportunity to share the couple’s story in their own words.

“It was really important for me to hear as much from Lucy and Desi—the people—as we could, so we really started digging into the recordings,” Poehler said in a recent interview with Elle Magazine.

The recordings Poehler is referring to are the hours of unheard archived audiotapes Ball and Arnaz recorded in preparation for their individual autobiographies. Thanks to Lucie Arnaz Luckinbill (the couple's first born), the audiotapes along with never-before-seen retro home videos were made available to the documentary team. The treasure trove of vintage material added a vivid sentimentality to the film.

Pace clipping, the documentary spans from their respective traumatic childhoods, to their rise to stardom and garnering of industry-titans status, their heartbreaking and complicated love story and divorce, and finally their inevitable departures from life.

Lucy and Desi includes interviews with industry icons close to the famed couple, like Carol Burnett, Bette Midler, Spanish-American actress Charo, TV writer Norman Lear, and more. We also get interviews with family members, including the Arnaz children, and Lucille Ball’s brother, Fred Ball. Audiences are invited into some of the family’s most personal experiences, even getting insight into how Ball and Arnaz spent their last moments together–a scene that had my lower lip quivering like a trilling horse and scrambling for the nearest tissue.

The dark underbelly of Ball and Arnaz’s personal lives are merely touched on in the doc (like Ball’s connection to the Red Scare and Arnaz’s infidelities and alcoholism), as are the ways the two made significant contributions to the industry, like creating the multi-camera sitcom format, and founding the model for the “rerun” (because Lucille Ball had a baby and the couple needed, like, a sec). The film also nods to how they made impacts culturally, like Arnaz allegedly introducing the conga line to the States, Ball establishing a space for women-centered sitcoms, and the two redefining what an “American” family looks like as a mixed race couple.

“In Lucy and Desi, I think people will see two outsiders and two gatekeepers who were not typical of the 1950s,” Poehler told Elle Magazine. “They were a very modern couple: a white woman and a Cuban American and recent refugee who changed the game. They took huge risks and they used the power they had to lift people up.” 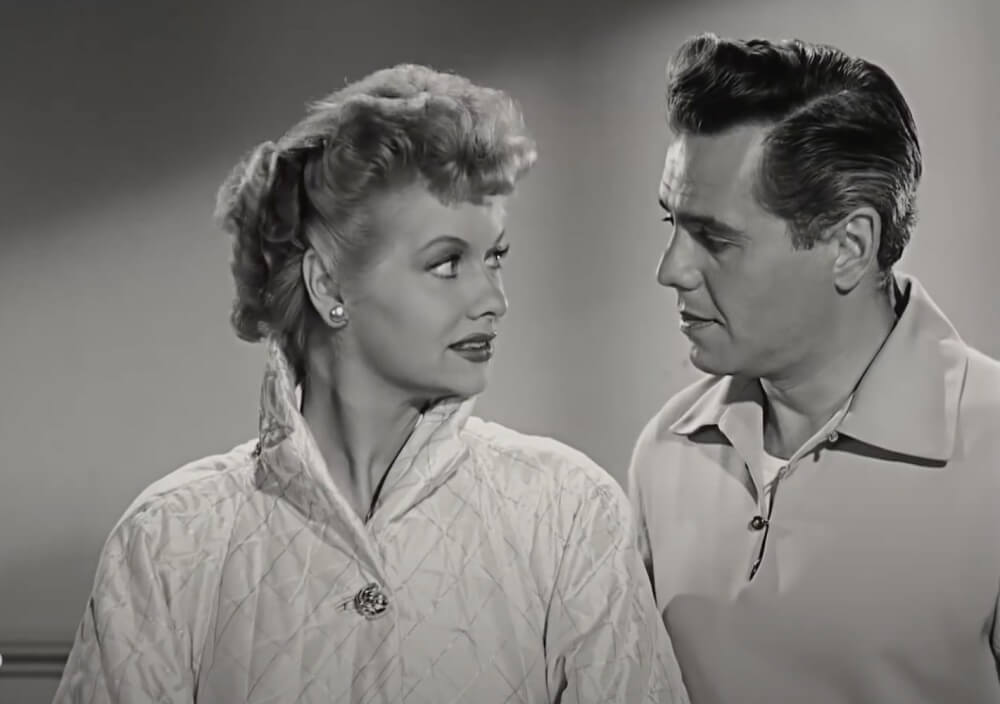 The film comments that the couple’s success is not due to luck or any so-called “genius”–rather their impenetrable work ethic and perseverance, with a nod to Ball’s in particular. Ball was an unstoppable force. I Love Lucy outpaced Queen Elizabeth II’s coronation, the Presidential inauguration (Lucy amassed 44 million viewers vs. Eisenhower’s 29 million), and ultimately outpaced Arnaz’s desires. In the documentary, Arnaz expressed the difficulty he had with the overwhelming success and work load.

Arnaz reveals in an audio recording. “I’m not judging. . .I happen to like other things, besides being in front of an audience.”

In 1962, when Arnaz’s drinking problem and depression got out of hand, Ball had to take over the couple's production studio, Desilu productions, and eventually bought him out. Ball became the first woman to run a Hollywood studio, but she wasn’t happy about it. Ball’s passion was in performance—not producing, but that didn’t stop her from doing what needed to be done.

“ ‘Kid, that’s when they added an S to my last name,’ ” Burnett recalls Ball telling her about her transition to the head of the studio.

Throughout the film, Poehler remains focused on the couple’s vulnerabilities and humanity. Like the aged home videos sprinkled throughout the documentary, the hardships and disappointments Ball and Arnaz experienced are looked at through a rose-tinted lens. The film is more interested in what worked than what didn’t, and the result is an absolute love-letter to the couple. Though some may find issues with the sugar-coated narrative, I loved sinking into the warm fuzzy feelings and nostalgia-ride this doc provided. After watching it, I wanted nothing more than to watch I Love Lucy reruns (which they invented!) and belly laugh my way into the past.

Lucy and Desi is a perfect way for newbies and mega-fans to come together and honor the legacies of these two brilliant icons, and witness their imperfect yet unconditional love for one another.

Watch the trailer for Lucy and Desi below! Now streaming on Amazon Prime.