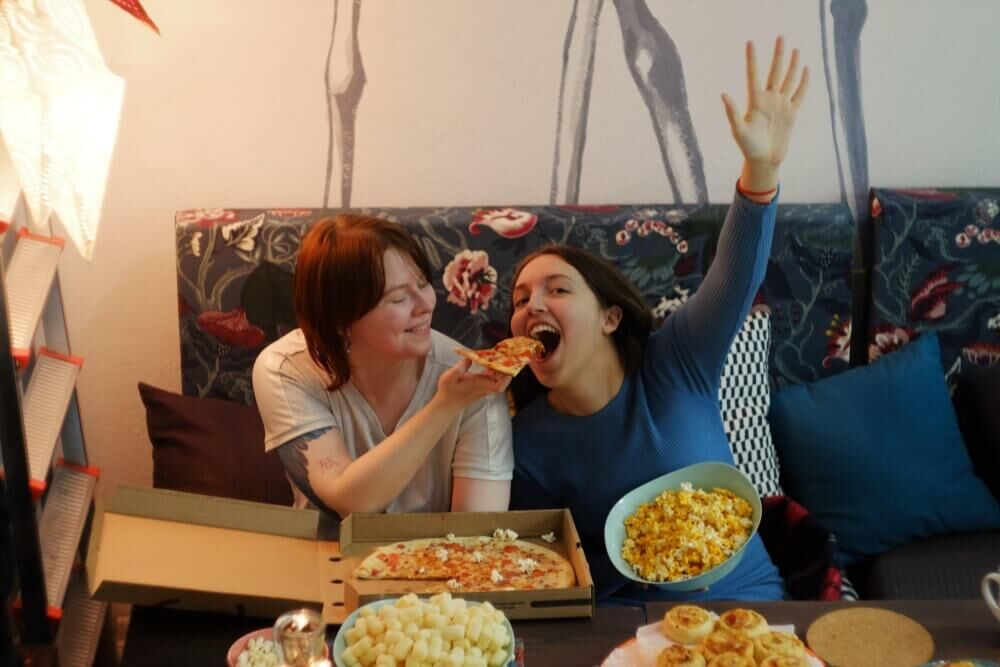 Need some fun flicks to round out your next holiday movie night? Have no fear! We’ve got you covered with some amazing by-women, for-women movies guaranteed to get you feelin’ festive.

Set on New Year’s Eve 1981, this ensemble comedy follows the lives of different groups of New Yorkers as they prepare to say goodbye to the old and ring in the new at their friend Monica’s (Martha Plimpton) NYE bash. The film features a truly loaded ensemble cast: '90s teen royalty, Christina Ricci (Lizzie Bordan Chronicles), and Gaby Hoffmann (Transparent) play two Long Island high schoolers who get lost in the city and wander into a Lower East Side punk club. Meanwhile, Courtney Love and Paul Rudd appear as best friends struggling to not act on their major sexual tension. In a further “who's-who” of Hollywood, the film includes Kate Hudson, Janeane Garofalo, and Ben Affleck. Plus, the film’s soundtrack is stacked with pop classics like Kool & the Gang’s “Get Down on It” and “Our Lips Are Sealed" by The Go-Go's.

If you want to get all up in your feels this winter, grab some tissues and put on Carol. The 2015 drama, based on Patricia Highsmith’s 1952 novel, The Price of Salt, tells of the forbidden love affair between Therese (Rooney Mara), an aspiring photographer, and socialite Carol Aird (Cate Blanchett). The two women meet by chance and quickly fall for each other but must conceal their relationship in a world that’s not yet ready to accept their love. Set in New York City at Christmastime, the film contrasts its characters’ yearning with their cheery, festive environment, making this tale all the more heart wrenching.

Clea DuVall (But I’m a Cheerleader, American Horror Story) directed and co-wrote this queer twist on the traditional holiday rom com. The film follows Abby (Kristen Stewart) and Harper (Mackenzie Davis of Halt and Catch Fire) as they visit Harper’s family for Christmas, with Abby planning to propose to Harper on Christmas morning. But as it turns out, Harper hasn’t exactly told her conservative parents about her and Abby’s relationship. In fact, she hasn’t even come out to them yet. Abby, shocked and hurt, reluctantly agrees to “play straight” for the weekend until Harper’s ready to spill the beans to her family. But as one can imagine, things don’t go quite as planned...

This early-’00s retelling of Charles Dickens’ A Christmas Carol pulls out all the stops for campy Christmas fun. Vanessa Williams (Desperate Housewives, Ugly Betty) plays Ebony Scrooge, an ego-centric pop sensation whose runaway success has made her a demanding diva (and total holiday buzzkill). All this changes on Christmas Eve, when the ghost of Ebony’s former singing partner, Marli (Rozanda “Chilli” Thomas of TLC), tells her that she’ll be visited by three spirits of Christmas Past, Present, and Future...and yeah, things are going to get nasty. This movie is so delightfully over the top that it’s impossible not to love, and as an added bonus, it features two original Christmas songs performed by Williams and Thomas.

This comedy stars Katie Holmes as April Burns, a 20-something New Yorker who invites her estranged family to Thanksgiving dinner at her and her boyfriend, Bobby’s (Derek Luke), apartment after discovering that her mother (Patricia Clarkson) is dying from breast cancer. As April’s family makes the trek from suburbia into the city, details about their complicated relationships with each other are gradually brought to the fore. Meanwhile, April struggles to make a presentable turkey and Bobby zooms around the city looking for a nice suit. The movie is full of playful humor but, at its core, shows just how precious time with loved ones really is.

Whether you’ve read the book five times or are going in cold, Greta Gerwig’s 2019 iteration of Louisa May Alcott’s classic tale of four precocious sisters is the perfect feel-good movie for the whole family to enjoy. With an all-star cast, including Saoirse Ronan, Florence Pugh, Emma Watson, and Timothée Chalamet, the film breathes new life into the March sisters’ stories with breathtaking design and newfound feminine power. It’s a perfect ode to the ups and downs of sisterhood and will have you dreaming of snowy woods and cozy nights by the fireplace all season long.

If you’re bored of the happy endings found in most holiday movies, feel free to take a total 180 with this 1974 Christmas-set horror flick starring Olivia Hussey (1968's Romeo and Juliet, Death on the Nile). A small liberal arts college is quieting down for the holidays when several sorority girls are murdered by a mysterious stalker. As the sorority sisters investigate their friends’ deaths, they stumble into an underground campus conspiracy and must fight for their lives. Black Christmas is inspired by the Canadian urban legend of "the babysitter and the man upstairs" and is also based loosely on a series of real-life murders that occurred in Montreal in 1943. The film has garnered a cult following over the years and is now credited as one of the earliest slasher films, as well as inspiration for John Carpenter's Halloween (1978).

Nancy Meyers (Father of the Bride, The Parent Trap) wrote and directed this charming romance, which stars Kate Winslet and Cameron Diaz as a Londoner and a Californian who arrange a two-week home swap to escape their heartbreak during the holidays. In typical rom com fashion, both women stumble into love while in their temporary homes and must decide whether to extend their stays or return to their old lives. While The Holiday is a bit predictable plot-wise, it’s the kind of light, easy watch that’s perfect for a fun night in with friends and a glass of wine. Plus, Winslet and Diaz are both so charming you can’t not root for their characters’ happy endings.

Queen Latifah stars as Georgia Byrd, a burned-out department store employee working gruelling days during the holiday season. When Georgia learns that she has only weeks to live due to a rare brain condition, she says “screw it!” and decides to blow her savings on a luxury European vacation. Staying at the posh Grandhotel Pupp in the Czech Republic, she mingles with retail magnates, mistresses, and even a US Senator. Free from inhibitions for the first time ever, Georgia touches the lives of all those at Grandhotel with her carefree spirit. In the process, she starts to realize she’s been a “somebody” all along.

Tangerine follows a transgender sex worker, Sin-Dee Rella (Kitana Kiki Rodriguez), as she treks through LA’s red-light district on Christmas Eve night. Fresh out of a month-long prison sentence, Sin-Dee joins forces with her best friend, fellow sex worker Alexandra (Mya Taylor), to hunt down her fiance, Chester, who has cheated on her with a cisgender prosititute. Interestingly, neither trans actress had been onscreen before this film. When director Sean Baker first met Taylor at the Los Angeles LGBT Center, the two immediately hit it off. He later met Rodriguez through Taylor (the two were old friends) and incorporated both women’s lived experiences into the film’s plot, creating a refreshing, almost jarringly raw portrayal of LA’s sex industry. Tangerine is also notable for its technical achievements. It was shot entirely on an iPhone 5S, allowing Baker to utilize dynamic, close-up shots to create an intimate character study.

Photo by //unsplash.com/@rruprrup?utm_source=unsplash&utm_medium=referral&;utm_content=creditCopyText">Aleksandra Sapozhnikova on Unsplash

Tags: holiday movies , Christmas movies , female-centered films , movies about women
Support Feminist Media!
During these troubling political times, independent feminist media is more vital than ever. If our bold, uncensored reporting on women’s issues is important to you, please consider making a donation of $5, $25, $50, or whatever you can afford, to protect and sustain BUST.com.
Thanks so much—we can’t spell BUST without U.