Titane, the Surprise Winner of the Palme D'Or, is Everything You've Heard It Is, But Is It Really a Gender-Bending Queer Film? 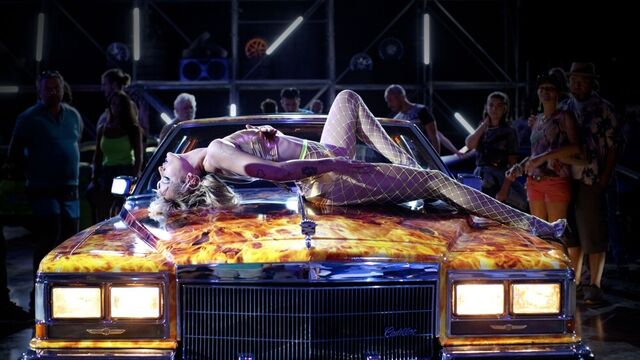 By now you’ve probably heard of Titane. It won the Palme d’Or at the Cannes Film Festival, marking only the second time a female director has won since Jane Campion made history with The Piano in 1993. It will be France’s Academy Award submission this year, and it is blowing minds all over Twitter and Letterboxd. It’s hyped as hell.

Enjoyed the wild hairpin turns of Julia Ducournau’s second feature (after the excellent ‘Raw’). It is totally and wholly its own beast, starting shockingly and unflinchingly in your face and ending in an about face… that’s best experienced for yourself. Genre busting brain fuel. pic.twitter.com/JlpW6A7Tuj

Titane isn’t just the best movie of this year, I think it might be the best of the last several. I’m high above the clouds rn and my brain is mush but my god, it’s so fucking funny, disgusting and moving all the same. Julia Ducournau Forever. Long live the New Flesh ❤️‍🔥 pic.twitter.com/z7Ba47iF1K

Titane follows Alexia (Agathe Rousselle, in her first feature role) from a childhood car accident, when we see her outfitted with a titanium plate in her head to her adulthood, where she is a dancer at a car show, giving autographs to desperate dudes, including one who follows her to her car afterwards. He tells her he’s in love with her, and maybe she could give him a chance. She responds to his advances by stabbing him in the ear with her hairpin.

She heads back into the car show venue, after this dude dies on top of her, to shower. The car she performed on (with?) flirts with her, and she gets into the car and has sex with it. It’s probably my favorite sex scene in cinema history to be honest, I appreciate the level of trust you have to have in the film and the story during a scene like this. It was funny without being silly, and it was sexy and scary. When you go into a movie expecting “horror” and find yourself trying to figure out if it’s sci-fi or fantasy or horror or all of them at the same time, it rules. There was even a moment where I allowed myself to think it was going to be a sci-fi horror fantasy automotive romcom? Which maybe it kind of is?

Titane is written and directed by Julia Ducournau, a French filmmaker who rose to notoriety when her first feature film Raw premiered at Cannes in 2016 and was awarded the FIPRESCI Prize, an award given at a number of international festivals by the International Federation of Film Critics. Raw tells the story of a lifelong vegetarian who goes to veterinary school, is forced to eat raw rabbit during a hazing, and develops a taste for human flesh.

Shot by Ruben Impens, who also shot Raw, Titane looks cool as hell. The violence is shot somewhat matter-of-factly, forcing you to watch and not making any particular comment on the action as you do. Impens uses pinks and blues heavily, and the cold surfaces of the apartments and public buildings the characters exist in, works to reinforce the genre-fuckery that is Titane. What becomes a family drama takes place in cold, sterile environments that recall action movie settings. The score by Jim Williams, another repeat collaborator from Raw, continues this hot and cold theme. Synths are present and at times it sounds like a horror movie soundtrack, but the choral vocalizations and bells can bring warmth and humanity to even the most foreboding tracks. 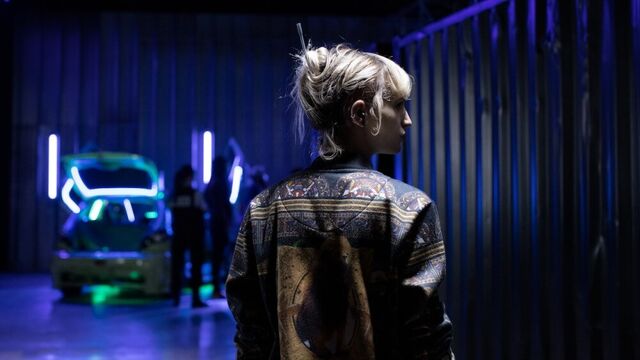 We learn quickly that Alexia has killed before, and a group murder scene evokes Tarantino with its mix of humor and violence. Alexia kills roommate after roommate but grows weary of all the extra people she has to murder. But violence hits differently when it isn’t intended to add a coolness factor. Ducournau is aware of and curious about the impact violence has on the human body. We see the consequences of the action and that’s what makes Ducournau’s violence and body horror so shocking.

On the run after her slaughter-fest, Alexia disguises herself as Adrien Legrand, a boy who has been missing for years. She hacks off her hair, shaves her eyebrows, binds her torso, and breaks her nose. Here we meet Vincent, played by Vincent Lindon, who won Best Actor at Cannes for his performance in 2015’s The Measure of a Man. A supermasculine figure in a raw moment, he is impossible to look away from. Vincent sees “Adrien” and wants to believe it’s him so badly that he does. Vincent’s desperation and desire for love and connection is strong enough to outweigh any suspicions he might have.

The evolving relationship between father and son is sweet, affecting, and surprising. Lindon’s performance is heartbreaking. He loves his son, and is patient with him, despite Alexia-as-Adrien’s guarded attitude towards him. It’s never clear if Vincent ever really thinks Alexia is his son, but this poses my favorite question in the film: did Vincent just want someone to love?

He’s an intimidating physical presence-- Ducournau asked Lindon to weight lift for a year and half to prepare for the role-- but his eyes are sad and kind and he is so earnest in trying to usher Adrien out of his shell. The role seems written for him. Ducournau told Variety, “In life, he’s someone who moves me because extremes are constantly co-existing in him. He’s like this big suit of armor, he wears his body like an armor, and yet he’s constantly on the verge of crumbling. I knew I could show him like no one had seen him before.” 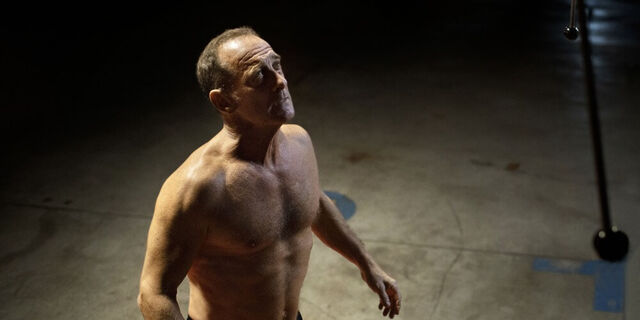 Where the movie doesn’t really land is on the “queerness” of its story. Alexia’s non-mainstream sexual attraction to cars, I’ll give you. Themes of a chosen family? Absolutely. But Titane has been praised for being “gender-defying” when it says as much about gender identity as Mrs. Doubtfire does. Alexia’s cross-dressing to disguise herself as Adrien has nothing to do with her gender expression, it’s a means of deception.

Jude Dry at Indiewire sums it up, “The iconography of transmasculine transition is used as window dressing in this gory fable. The dreaded Ace bandage, long out of use and which appeared most prominently in the controversial film Boys Don’t Cry, leaves red lacerations on Alexia’s breasts and back. To keep up with his demanding job, Vincent injects his bruised buttocks with steroids every night, flailing pantingly on the bathroom floor after each violent jab. Titane twists these milestones of transition — a beautiful and liberating experience for most trans people — making them painful and grotesque in service of its bent toward body horror.”

Titane is a genre-bender for sure, but calling it gender-bending or -defying is grasping at straws. The movie is a hell of a ride, from serial killer murder fest to fish out of water to family drama to car-baby-origin story. The real depth of the film is in the relationship between Vincent and Alexia-as-Adrien, and in the lengths people will go to connect with another person, and to love and be loved.