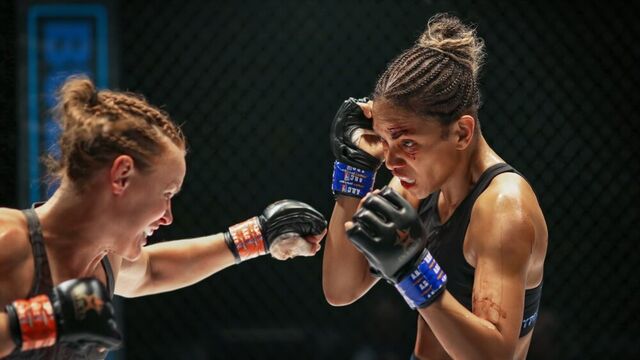 Halle Berry will make her directorial debut with the upcoming Netflix sports drama Bruised, in which she stars as a disgraced fighter who must defend her name and rediscover her power.

The 55-year-old Oscar winner plays Jackie Justice, a former mixed martial arts champion who left the sport after a devastating loss. Still humiliated years later, Justice is persuaded into a vicious underground fight by her boyfriend and manager, Desi, played by Adan Canto (X-Men: Days of Future Past). Suddenly, Justice is back in the game, attracting the attention of a fight league promoter, played by Shamier Anderson (Goliath), who promises her a new life in the ring.

But redemption is never quite so easy. Just as Justice is putting the pieces of her career back together, Manny (Danny Boyd) – the son she abandoned as an infant – appears on her doorstep. Now, Justice must fight not only for her own reputation but for the security of her family.

Bruised first screened as a rough cut at the 2020 Toronto International Film Festival and was soon after purchased by Netflix. In conversation at TIFF, Berry revealed that the character of Jackie Justice looked very different when she first read the Bruised script by Michelle Rosenfarb in 2017.

According to Entertainment Weekly,  Justice was first described as a “25-year-old Irish Catholic girl”.  Berry, however, saw herself in the character and pitched herself for the lead. “Why not a Black woman? It's an old genre; there's so many great fight films that have been made,” Berry told Variety.  “I made the point why it would be worth retelling an age-old story with this new twist.”

Major changes to the film didn’t stop there. Once Berry had convinced the film’s creative team she was right for the lead, she was still dissatisfied with the several potential directors she met with for the project. None of them shared her vision for a gritty, unforgiving portrayal of female fighters. It was Berry’s producing partner, Elaine Goldsmith-Thomas, who eventually suggested that Berry herself helm the picture and fulfill her long-time dream of directing.

It was an easy decision for the Monster’s Ball actress, who threw herself into many new responsibilities on set. “As an actor, I always show up and do my part, and I can only do what I can do,” Berry told Variety.  “Being the director, I have a part in the totality of every department. I get to have a voice. That was different, and I really loved that.”

The mother of two told the New York Times that, to portray her MMA fighter character as realistically as possible, she trained four to six hours a day in everything from boxing to jiu jitsu. In true badass actor fashion, Berry actually cracked two ribs while filming a fight scene with co-star Valentina Shevchenko but kept acting (and directing!) through the pain.

Ultimately, Berry’s relentless devotion to the project has come from her connection to Justice’s journey as a woman, mother, and person of color.

“I understand being marginalized as a Black woman and the anger, resentment, fear and frustration that comes with all of that,” Berry told the Times. “If I could put all of that into this movie, all the things that I know so well, then I knew I could create a character that will not only be real, but will resonate with women of different races, too.”

Bruised will premier in select theatres on Nov. 17 and globally on Netflix Nov. 24. Until then, check out the trailer for the jaw-dropping redemption story here: