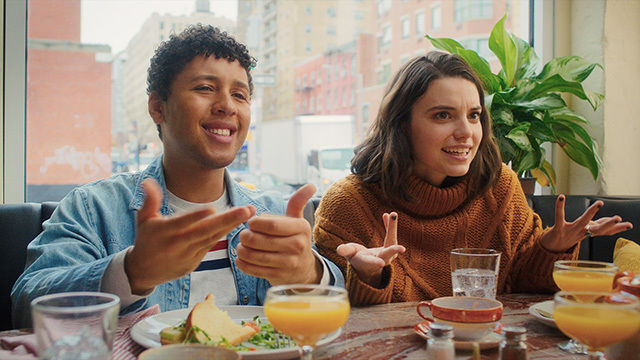 Written and directed by Jonah Feingold

In a world where meeting a potential partner in-person seems almost impossible, Dating & New York dramatizes today’s most common method for mingling-hooking up on dating apps. The romantic comedy follows Milo (Jaboukie Young-White from The Daily Show with Trevor Noah) and Wendy (Francesca Reale from Stranger Things) as they embark on a casual, friends with benefits relationship- no feelings, just sex. Writer/ director Jonah Feingold presents their story as a modernized fairy tale set in New York City with imagery and music that evokes vintage romantic films from the past. In true rom-com form, the central couple’s relationship coexists beside the casual relationship of their friends, Hank (Brian Miller from Bridge and Tunnel) and Jessie (comedian Catherine Cohen). As one connection blossoms into something more, however, the other comes infected with the one thing they are all trying to avoid- feelings.

Dating & New York is very effective in its depiction of the relationship woes that frequently surface as the result of modern technology. From ghosting to catfishing, it’s a jungle out there, and this film is perfect for those seeking a mirror image of their own online dating lives. -PAYTON TOOMEY