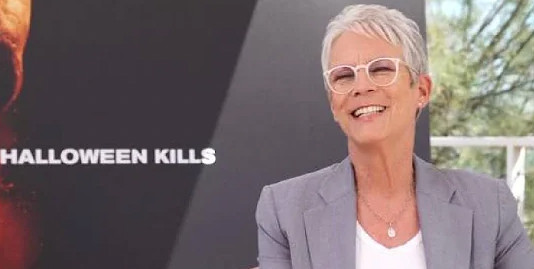 On September 8th, at the 78th annual Venice International Film Festival, Jamie Lee Curtis received the Lifetime Achievement Award. In anticipation of the final two installments in the Halloween franchise, Halloween Kills (2021) and Halloween Ends (2022), Curtis will be reprising her role as protagonist Laurie Strode.

When asked about Curtis’ career, Alberto Barbera, Festival Director, stated: “To date, her extraordinary four-decade career reminds us that true talent, combined with intelligence, wit, endurance, and sheer grit, are the hallmarks of this true and unforgettable star.” The child of Hollywood actors Tony Curtis and Janet Leigh, Jamie Lee Curtis has had a career that transcends decades, as a star of horror classics and cult comedies, a two-time Golden Globe recipient, and more recently a New York Times best-selling author of children’s books. While Jamie Lee Curtis’ career began with 1978’s Halloween, the actress has performed in over 40 films and 20 television shows, including Charlie’s Angels (1978), Freaky Friday (2003), and Knives Out (2019).

Giving birth to the “final girl” trope, Halloween (1978) set a precedent for American horror in leaving one final female character who is strong enough (or pure enough) to escape death. Laurie is the quintessential "Scream Queen," discovering her friends’ bodies and narrowly escaping Michael Meyer’s attacks. Only the appearance of Dr. Loomis, who shows up just in time to shoot Meyers to "death," is what saves Laurie. Throughout the 1960s and 1970s, the horror genre we know and love was heavily influenced by Italian horror, known as “Giallo.” These Giallo films combined erotic pulp fiction and grotesque horror elements that inspired the American slasher genre of Curtis’ debut. When asked about receiving the Lifetime Achievement Award, Curtis shares: "Italian Cinema has always honored and heralded the genre that gave me my career, so I couldn't be more proud and happy to accept this award from the Venice International Film Festival on behalf of Laurie and all the courageous heroines of the world who stand tall in the face of seemingly insurmountable obstacles and refuse to yield.”

As a follow-up to 2018’s Halloween, Halloween Kills (2021) picks up right where we left off with Laurie and her family believing Michael Meyers to be dead after locking him in the basement of Laurie’s burning house. Laurie must lead the Haddonfield community in hunting down and killing off Meyers once and for all. The sequel will feature recurring characters from Laurie’s past, with actors Nancy Stephens, Kyle Richards, and Charles Cyphers reprising their roles from the original Halloween (1978).

Halloween Kills (2021) is set for a U.S. theatrical release on October 15th and same-day streaming on Peacock for paid-tier members. You can check out the trailer below!

Tags: Jamie Lee Curtis , Halloween franchise , Halloween Kills , film festival , Venice Film Festival
Support Feminist Media!
During these troubling political times, independent feminist media is more vital than ever. If our bold, uncensored reporting on women’s issues is important to you, please consider making a donation of $5, $25, $50, or whatever you can afford, to protect and sustain BUST.com.
Thanks so much—we can’t spell BUST without U.