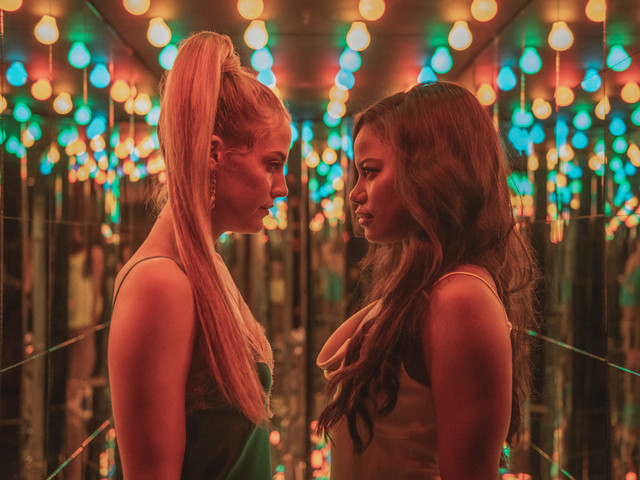 “You wanna hear a story about how me and this bitch fell out? It’s kinda long but it’s full of suspense,” hilariously narrated by Taylour Paige as the title character, Zola kicks off with the infamous line that started it all. With hypnotic visuals and an unparalleled musical score, it’s hard to not get swept up in this hoe trip from hell. Directed by Janicza Bravo and co-written by playrite Jeremy O’Harris (writer of Tony Nominated Slave Play), Zola is based on the viral 2015 Twitter thread by then Detroit Hooters waitress Aziah “Zola” Wells. Zola keeps you at the very edge of your seat, is packed with a damn near gluttonous amount of comedic relief, and is just undeniably entertaining.

The movie starts out in a restaurant with a thinly veiled likeness to Hooters, where Zola is working when she meets a customer named Stefani. The two instantly click and Stefani invites Zola to hang out that night. The girls spend the night exchanging stories, laughing, being on the same wavelength and, to quote the original Twitter Thread, “vibing over [their] hoeism.” It is clear that these girls are in complete and utter platonic infatuation with each other. Stefani is an exotic dancer. So is Zola. Stefani is also a walking, talking red flag in stripper heels. With blonde cornrows, inches long acrylics, and an exaggerated blaccent, the audience is sent into a communal cringe as they watch this white bastardization of black womanhood slither her way into gaining Zola’s trust and friendship with manipulation and half-truths. 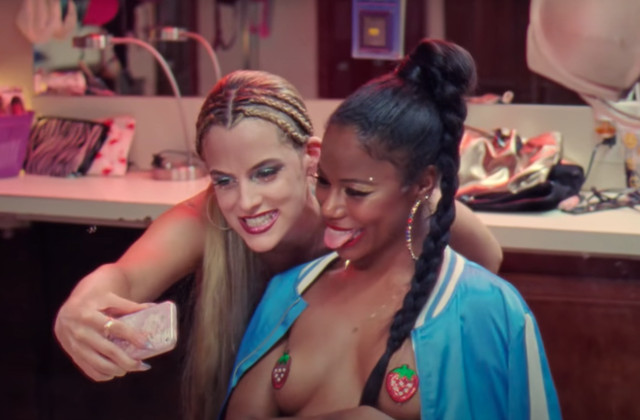 The next day, we find Zola on a roadtrip to Florida with Stefani, Derek, (Stephani’s man-child of a boyfriend played by Nicholas Braun), and Stefani’s “roommate” named X (Coleman Domingo) who “takes care of” her. Before long, Zola finds out that what Stefani described as a way to make “a shit-ton of money,” actually involves escorting, not just dancing, and that X moonlights as Stefani’s pimp.

In the spirit of “I knew this was a bad idea” and “damn, did not see that coming,” shit goes awry. Thankfully the film manages to maintain a wicked sense of humor while still addressing grim topics like sex trafficking, white woman privlege, and toxic relationships, it truly juggles it all well.You won’t be able to tear your eyes away from this mesmerizing downward spiral.

It’s undeniable that Zola is a story created by and for the digital age. Dialogue pulled and inspired by the Twitter thread is accented by the chirps of Tweet-like notifications. Additionally, slapstick-comedy-esque short form videos, strategically timed selfies, and reputation ruining Facebook-like posts are littered throughout the film.

Another thing the film gets right is casting. Each actor manages to deliver performances that will have you rooting for characters who are completely irredeemable. Taylour Paige and Riley Keough perfectly portrayed the chemistry and intensity of a fresh-out-of-the-oven female friendship—as well as its demise. Taylour Paige should win an Oscar for her use of side-eye alone, filling the character of Zola with both sass and a relatable "oh hell no" attitude. Paige’s voice takes on the role of puppet master as her narration instructs us to pay close attention, listen up, and not trust a word Stefani says. And how could we dare disobey?

Zola is playing only in theatres now.

Kevin Can F**K Himself Flips The Script On Misogynistic Sitcom Tropes: A Review

New Documentary By Beth B On Lydia Lunch, The War Is Never Over

Tags: Zola film , Taylour Paige , Riley Keough , Janicza Bravo , Aziah Wells , Zola Twitter Thread , films about sex work , stripper stories.
Support Feminist Media!
During these troubling political times, independent feminist media is more vital than ever. If our bold, uncensored reporting on women’s issues is important to you, please consider making a donation of $5, $25, $50, or whatever you can afford, to protect and sustain BUST.com.
Thanks so much—we can’t spell BUST without U.