Jenny Slate's Film "The Sunlit Night" Is An Earnest And Honest Attempt At Translating Creative Thinking Onto The Screen: Review 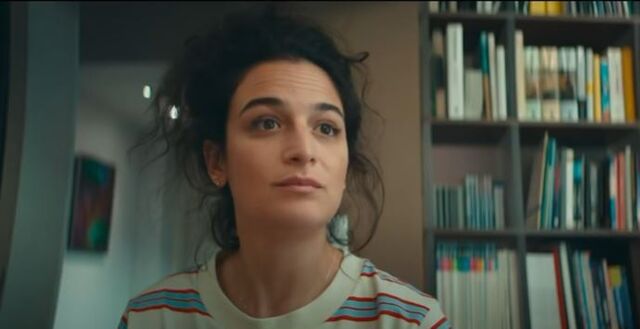 I imagine it’s difficult to make a film about artistry. I’m not talking about a biopic of a real-life artist (or reasonable facsimile), or a film interpreting their works—those have been made, and several have been quite moving (Never Look Away with its stirring Gerhard Richter analogue, or the emotional catharsis surrounding Vincent van Gogh’s death by suicide as brilliantly painted across the screen in Loving Vincent, to name a few).

But for the medium of film to not only establish a fictional artist protagonist, but also to successfully convey that protagonist’s approach to their own creative process in a way that feels true to life and not totally didactic or literal, seems like an awfully daunting task. In this sense, David Wnendt’s The Sunlit Night is an interesting experiment in figuring out a way to get an audience to understand not only how its specific artist protagonist conceives of the world around her, but how that particular worldview informs her actions and relationships with the film’s other characters. It’s just a shame that it’s not a particularly enjoyable film.

After being subjected to a comically brutal art school critique (which opens the movie with a bit of a satire fake-out not borne out by the rest of the story), and following a rejection from an artist residency, Frances (Jenny Slate) naturally feels adrift and unfulfilled as an artist. On a whim, Frances takes a job as a studio assistant for the irascible Nils (Fridtjov Såheim), a Norwegian artist (and Jim Gaffigan look-alike) whose best days are largely behind him. Why not exchange her claustrophobic relationship with her parents (David Paymer and Jessica Hecht) and relative privacy, and perceived freedom of the Lofoten Islands in the Arctic Circle?

Frances processes the world around her as various artistic analogues, cross-referencing each situation in her life—whether for the better or for the worse—with visual signposts, presented in voiceover for the audience’s sake. The Sunlit Night is based on a novel by Rebecca Dinnerstein Night; not having read the novel, I can nonetheless imagine that this comparative device works better on the page. Indeed, early in the film, when Frances reinforces the chaos of her too-small childhood apartment (where her parents sleep on a pull-out couch and she shares a bunk bed with her sister) by comparing it to the way colored rectangles fit together in a Mondrian painting, it almost feels like the film is pointing out how self-consciously artsy it is—as if it’s only through the protagonist referencing iconic works of art that the audience will accept that the movie is about an artist.

Yet as The Sunlit Night continues, it becomes clear—through Slate’s carefully dispassionate monologuing, as well as through sheer repetition—that Frances’ need to withdraw from her immediate surroundings and retreat into an art history textbook is a coping mechanism for better dealing with her own life. Yasha (Frances' love interest, played by Alex Sharp) is immediately compared to Caravaggio’s Boy with Fruit (and what a spectacular look-a-like piece of casting that is!), while a girl in the frozen food section of the supermarket reminds Frances of a Renaissance angel, inspiring her to use the girl as a model for her own work.

Per Frances, Norway is “so beautiful, it’s almost like a bad painting”—like a painting from a dentist’s office waiting room that you’re meant to glance over, register as pleasant, and forget the second you step across the threshold. As filmed by cinematographer Martin Ahlgren, it’s both luminous and harsh, serving as an adept backdrop for The Sunlit Night’s more pensive moments,

as well as a setting for establishing—and dispelling—different kinds of fantasies. If Frances comes to Norway for some peace and quiet (the goats that invade her sleeping trailer notwithstanding), hoping that through isolation and work, she might remake herself as an artist and a person, The Sunlit Night takes pains to show through Frances’ various encounters that it is through connecting with others honestly that true change occurs.

Nils, whose glory days of fame are behind him, is painting a barn for a Norwegian tourism agency, hoping it will reignite his career. The dynamic between Frances and Nils could easily veer into the clichéd—the nascent artist struggling to develop her own voice meets grouchy over-the-hill mentor—but thanks to Slate’s strong work as a scene partner, their partnership begins to grow in ways that feel both realistic and unexpected. (It also helps that the barn project is visually interesting. The Sunlit Night wisely introduces Nils as an artist who has fallen out favor with the art world, meaning that narratively, there’s no pressure for the ultimate final work of art to be spellbinding or astounding. Our expectations are set low enough that the finished barn, brightly colored and rough-hewn colors the Norwegian landscape, creates a wonderful picture at times.)

Similarly, over the course of the film, Frances also interacts with Haldor (Zach Galifianakis), the leader of an ersatz Viking-style village in the area. Originally from Ohio, Haldor has decamped to Norway to live out his fantasy of living in an imagined romantic past. (Since the movie is relatively short for a feature, it’s as if casting Zach Galifianakis in this role functions as shorthand for telling the audience precisely why he didn’t feel like he fit in back home.) In contrast, the only character who has come to Norway for intrinsically honest reasons is Yasha, who hopes to give his late father the send-off he had long desired—at the top of the world. It is perhaps Yasha’s solemnity and purpose of mission that attracts Frances to him, ultimately leading to the surreal spectacle—as far as watching The Sunlit Night is concerned—of a Viking funeral led by Zach Galfianakis where Jenny Slate also sings the Mourner’s Kaddish. (Only in a place that is so beautiful as to not seem real, a place where the setting is as much a character as in any given film about New York City.)

In the future canon of Jenny Slate films, The Sunlit Night is not anywhere near the perfect match with the material that was Obvious Child (2014). But it does feature an appealing lead performance from Slate, and is earnest and honest in its largely successful attempt to translate creative thinking onto the screen in equally creative ways.

In "Together Together," Ed Helms And Patti Harrison Form A Fragile Attachment During A Surrogate Pregnancy