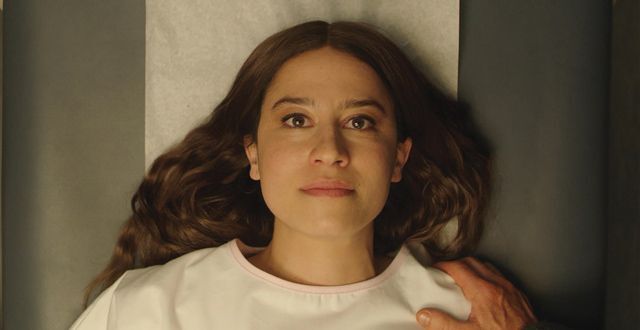 Grisly thriller False Positive explores the ultimate body horror premise: women and people able to give birth are forced to do so to benefit the patriarchy. Produced, co-written by, and starring Ilana Glazer, the movie is definitely a departure from what Broad City fans have come to expect from the feminist comedy mainstay. But a ribbon of dark humor runs through this ambitious, gory horror flick. Glazer’s meek heroine Lucy is like a docile, feminine vessel waiting to be filled with an embryo implanted via IVF by her esteemed fertility specialist (Pierce Brosnan). Surrounded by self-assured, blithely sexist men, Lucy is buffeted between her invasive, condescending boss (Josh Hamilton) and her seemingly perfect but very selfish husband (Justin Theroux) who expects her to sacrifice her identity to become a mother. Rounding out the impressive cast are Gretchen Mol in a memorable turn as an enthusiastically evil nurse, and Sophia Bush, who delivers a great Stepford-style mommy character hidden behind a sweet smile. Lovers of classic cinema will delight in the subtle nods to Rosemary’s Baby, and children’s book fans will sympathize with Lucy’s fantasies of Peter Pan being a part of her future child’s life. But be forewarned: False Positive’s shocking ending is not what to expect when Lucy is expecting.

False Positive
Directed by John Lee
Out June 25 on Hulu