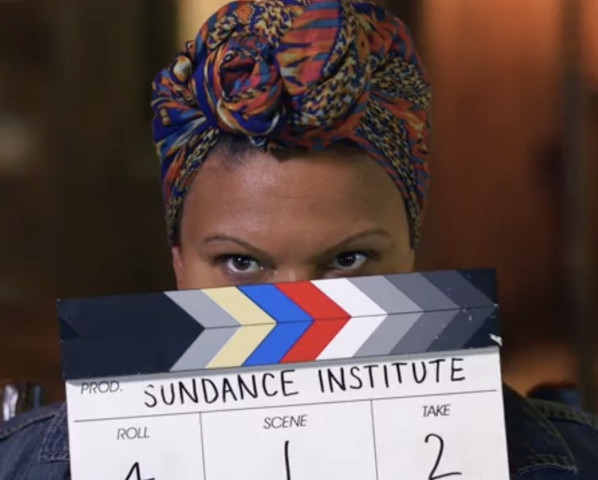 Though the '90s is often referred to as the Golden Age of Black cinema, men were overwhelmingly at the helm of many of the groundbreaking films that came to fruition throughout the decade. Even cult-classics such as Waiting to Exhale (1995) and Set It Off (1996), films that both celebrated and complicated our understandings of Black womanhood, were male-directed.

Nonetheless, the '90s bore witness to several filmmakers like Julie Dash (Daughters Of The Dust, 1991), Cheryl Dunye (The Watermelon Woman, 1996) and Kasi Lemmons (Eve’s Bayou, 1997) whose works have stood the test of time and managed to construct cinematic universes that truly center Black women’s experiences. By example, they’ve illustrated the importance of Black women not only being in front of the camera, but being integral figures in the crafting of their own stories.

A few present-day breakout filmmakers that both follow in their footsteps and forge their own distinct paths are those among the likes of Regina King, Janet Mock, and Ava DuVernay. Let's all continue celebrating the abundance of Black women filmmakers making waves in a largely white-male-dominated industry by amplifying their amazing contributions to the world of film. In no particular order, here are 10 Black/BIPOC women filmmakers we should all be looking out for:

Perrier’s career in film significantly gained traction in 2008 when she co-founded Black & Sexy TV, an indie, Black-owned network where she produced several steamy films and original series. She later took to the director’s chair and in 2019, her debut feature film Jezebel premiered at SXSW. Now streaming on Netflix, Jezebel is a semi-autobiographical depiction of Perrier’s time as a digital sex worker. Perrier now owns a production company called House of Numa.

Rees’ debut feature film Pariah, a coming-of-age tale about a young teen coming to terms with their sexuality, really put this writer-director on the map when it premiered at Sundance Film Festival in 2011. In 2015, Rees went on to write and direct HBO’s Bessie, an Emmy award-winning film exploring the life and times of the legendary blues singer Bessie Smith. Most recently, Rees co-wrote and directed the screen adaptation for Mudbound, a dramatic period piece exploring heightened racial tensions in the deep south. The critically-acclaimed film is streaming now on Netflix.

Tourmaline’s filmmaking career is largely rooted in her extensive work as an activist in the fight for trans and queer lives. Working alongside co-producer Sasha Wortzel, her earlier films STAR People Are Beautiful People and Happy Birthday, Marsha! explore the lives and historic activism of Sylvia Rivera and Marsha P. Johnson. Her most recent project Salacia (2019), a period piece on the life of a Black trans woman in 19th century New York, was picked up by the Museum of Modern Art in 2020.

Blank’s journey began as a playwright. Though many never made it to the big stage, her scripts aided in landing her in several television writer’s rooms. In her spare time, she indulged in comedy and rap music under the stage name RhadaMUSprime. This all culminated in the wildfire success of her breakthrough 2020 film The 40-Year-Old Version, a semi-autobiographical film in which a struggling playwright pursues a rap career exploring the common middle-aged woman’s experience. The 40-Year-Old Version is now streaming on Netflix.

Asante’s debut feature film A Way Of Life (2004), a dramatic telling of teen motherhood, really jump-started her fruitful career in film and television. She is perhaps most known as the director of the 2013 historical film Belle, inspired by the life of Dido Elizabeth Belle in 1700s England. In the years since, Asante has had her hands on a number of high-profile projects as director of Where Hands Touch (2018), and even branching out into television directing on The Handmaid's Tale (2019) and Mrs. America (2020)–both streaming on Hulu.

Moon left the professional world to pursue her lifelong love of filmmaking. She especially seeks to tell stories centering LGBTQIA+ experiences. Some notable projects of hers were released in 2017, including short films NOVA and Two Trans Women, as well as a web-series entitled Bad Alley. More recently, Moon graduated with an MFA in film production and her student thesis film One Last Deal (2020), which follows the relationship of Sara and her boyfriend Bill as they hustle to raise the money for her bottom surgery, saw much success in the film festival circuit.

Dumisa co-founded an independent film production company named Gambit Films in 2009. Under Gambit she released her debut feature film Nommer 37  (2014), a South-African crime thriller, which gained much attention from critics when featured at several notable film festivals including SXSW. The award-winning filmmaker is most notable for her recent work as a writer-director for Netflix’s original hit series Blood & Water (2020), a teen thriller following the lives of several troubled prep-schoolers.

DaCosta’s career took off when her first feature film Little Woods (2018) premiered at Tribeca Film Festival. Starring Tessa Thompson, the crime thriller follows two long-lost sisters raising the funds to pay off their recently deceased mother’s home. DaCosta is currently director of a modern-day sequel to the original 1992 film Candyman, set to be theatrically released this upcoming August 7. She is also set to direct Captain Marvel 2, which will premier in 2022.

Chukwu had a very rocky start with her debut feature film Alaska- Land (2012), which was completely rejected by the film festival and development lab circuits. Her follow-up short film A Long Walk (2014) gained a bit more notice, but it wasn’t until 2019 with the release of Clemency, that the writer-director got the praise she deserves. Starring Alfre Woodard, the film follows a prison warden’s re-evaluation of the nature of her job in the days leading up to a death-row inmate’s execution. Clemency is now streaming on Hulu. Chukwu is also set to direct an upcoming film informed by the memoir of Elaine Brown, former chairwoman of the Oakland chapter of the Black Panther Party.

Poe stamped her mark on the film industry with her 2019 short film Honey And Trombones. Her most notable work, however, is her 2019 feature film Selah And The Spades, an intimate portrait of the dark side of boarding school. The film premiered to much critical acclaim at Sundance Film Festival, and is now available for streaming on Amazon Prime Video. Poe has since gone on to direct for television with Two Sentence Horror Stories (2019) and The Twilight Zone (2020).

Selah And The Spades Trailer