In "Hysterical," Kathy Griffin, Margaret Cho, and Others Discuss the Contradictions of Being a Woman in Comedy 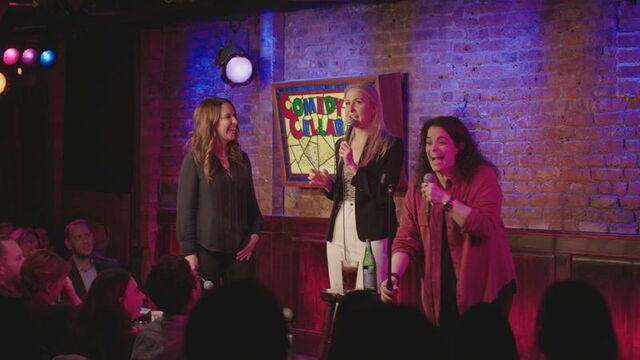 As the documentary Hysterical begins, neon signs flash over photos of comedians when they were young girls. The signs read: "BE PRETTY. BE SOFT-SPOKEN. DON’T BE BOSSY. BE NICE. DON’T BE MESSY. SMILE." While these expectations tend to be ingrained in the brains of girls and women from birth to death, some of them are counterintuitive to a life in comedy. How can a comedian make people laugh without a bit of bite and a bit of mess?

Hysterical, which premieres on FX on April 2, considers the fact that women still have a hard time breaking into the comedy scene and convincing audiences that what they have to say is worth listening to. The documentary’s title comes from the Latin word hystericus, or “of the womb,” and has historically been ascribed to women as a belittling insult and an exclusively female clinical diagnosis of insanity. The positive usage of the word, which denotes that something is uproariously funny, tends to apply to a comedy scene that remains dominated by men. The documentary makes the case that the life of a woman in comedy is not about emulating men and shunning all associations with womanhood, but about reflecting what the experience of womanhood is really like. “It’s not about talking like men, or talking about the stuff that they talk about,” Judy Gold says in the doc’s opening sequence. “It’s about our experience, and that is as valid as theirs.”

Hysterical showcases the viewpoints of 15 comedians, including Margaret Cho, Nikki Glaser, Kathy Griffin, and Sherri Shepherd, and is cut with lo-fi clips of twentieth-century comedians like Phyllis Diller, Moms Mabley, and Joan Rivers. The sheer volume of comedians the documentary features and references is ambitious, and sometimes distracting, but it works to eliminate the idea that women in comedy are a homogeneous, brash blob. “Everyone assumes you’re kinda the class clown that’s, like, ‘Look at me! Look at me!’” Fortune Feimster says of the standard comedic personality. But each comedian in the documentary describes a vastly different upbringing, recalling immigration and racial bias; bullying and tomboyishness; nuclear families and suburbs; cities and farms; tradition and eccentricity; shyness and aggression. One theme that unites each of their stories is their sense of being an outsider—a shared truth that undoubtedly allowed for the observation essential to building real comedy chops.

Hysterical disproves the tired “women aren’t funny” myth through the bits and subsequent laughs sprinkled throughout, but this is not the documentary’s purpose. Instead, it questions, without definitively answering, why that mythology came into existence and continues to exist today. “There are funny men and funny women,” Wendy Liebman says, “but I do understand that men may not want women to be funny.”

As the interviewees recall their earliest leaps into the comedy world, each offers a variation on the same story: They fearfully got onstage, told some jokes, felt on top of the world, and decided that they knew what to do for the rest of their lives. But as they started to push into the comedy world, each encountered gender-related pushback. One of the central issues Hysterical explores is the question of safety, which is not something male comics have to think too much about while traveling for work, performing late-night gigs in dingy basement clubs, or staying in seedy motels in close quarters with men who are, in some cases, unhealthily used to an ego massage. “There’s the dream, there’s the fantasy, and then there’s the reality check,” Marina Franklin says. “I had never understood sexism until I got into the comedy scene.”

Hysterical disproves the tired “women aren’t funny” myth through the bits and subsequent laughs sprinkled throughout, but this is not the documentary’s purpose. Instead, it questions, without definitively answering, why that mythology came into existence and continues to exist today.

While Hysterical covers the frequent use of misogyny as a comedic device, it does not push for political correctness in joke-telling. The documentary recognizes that jokes are always subjective and often uncomfortable. Many of the women who appear in the doc advocate for free speech, even when that speech is brutal (Gold even wrote a book about it called Yes, I Can Say That: When They Come for the Comedians, We Are All in Trouble). When Kathy Griffin posed for a photo while holding up a model of Trump’s disembodied head covered in fake blood, for example, she was forced to cancel a major comedy tour. Kelly Bachman, a comedian and rape survivor, was met with a series of boos and shouts of "shut up" when she called out Harvey Weinstein while he was in the audience at Downtime Bar. The real issue in comedy is not controversial punchlines, but dangerous attitudes and actions among comedians, as in the cases of Bill Cosby, Louis C.K., and Chris D’Elia, to name a few. Some comedians and audiences use the free-speech argument to justify misogyny, but do not apply the same argument to women who call misogyny out in their own sets.

“The things we’re talking about as comics, it’s like, this is your experience on this planet. And comics are here to just hold up that mirror to be like, ‘This is us,’” says Iliza Schlesinger. “I think George Carlin calls us comedians modern-day philosophers — we’re also whistle-blowers! You’re standing up for what you believe is right, and you’re calling things out. It’s my job to stand up there alone, in the dark, and tell you where I see bullshit.”

Many of the issues for women in the microcosm of the comedy scene reflect broader issues women face out in the world, including meeting the demands of motherhood while working for lower pay than their male counterparts.

Hysterical addresses serious issues within the comedy world, as well as the individual traumas female comedians have faced, but it balances this seriousness with a fitting sense of laughter and community. Many of the issues for women in the microcosm of the comedy scene reflect broader issues women face out in the world, including meeting the demands of motherhood while working for lower pay than their male counterparts. It makes sense that women’s experiences of being silenced, not taken seriously, or deemed outsiders in the comedy world and the world at large, lend themselves to the introspection and social commentary that comedy calls for. As the Hysterical women discuss the motivations behind their comedy, a resounding theme emerges: the creation of community, empathy, and healing. The documentary highlights that their emotion, or “hysteria,” or whatever anyone wants to call it, is an asset to being “hysterical” in the comedic sense of the word.

“Women have an advantage in stand-up comedy, because we’ve been dabbling in our feelings for far longer than men have,” Glaser says, “and so that’s why we’re killin’ the game right now.”

Sarah Paulson On Tig Notaro's Podcast Was Everything I Ever Wanted