In The "My Salinger Year" Movie, Margaret Qualley's Joanna Rakoff is a Secondary Character in Her Own Story 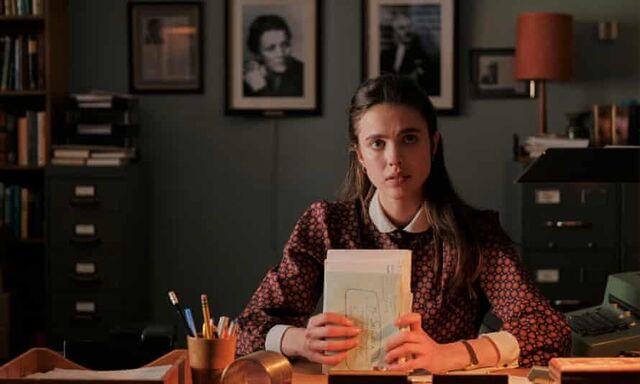 In 1957, J.D. Salinger wrote a letter to a movie producer explaining why he had not released the rights to a film adaptation of The Catcher in the Rye. “There are readymade ‘scenes’—only a fool would deny that—but, for me, the weight of the book is in the narrator’s voice… his asides about gasoline rainbows in street puddles, his philosophy or way of looking at cowhide suitcases and empty toothpaste cartons—in a word, his thoughts,” Salinger wrote. “He can’t legitimately be separated from his own first-person technique.”

The same could be said about the 2021 film adaptation of Joanna Rakoff’s 2014 memoir, My Salinger Year. The memoir details Rakoff’s life while she worked in the literary agency that represented Salinger in the mid-‘90s and received countless letters from his fans. Rakoff, who is now a successful freelance writer, revisits post-graduate uncertainty, unfulfilled writing dreams, a bygone New York City, complicated relationships with friends and lovers, and how she felt about it all. It's a story about Rakoff, disguised as a story about Salinger; with the movie, the opposite is true.

Despite My Salinger Year’s relatively recent time period, both the book and the movie are built on—as Rakoff’s character (played by a wide-eyed Margaret Qualley) says—“the nostalgia factor.” Joanna is far from her riot grrrl and slacker contemporaries; she inhabits a buttoned-up, 90s-meets-50s world as she types on a typewriter in a sort of cathedral of carbon copies. In the movie, her pre-Miranda Priestly boss, Margaret (coolly played by Sigourney Weaver), assures her, “It’s perfectly fine to wear trousers if you’re a woman.” The Agency’s hallowed halls bear a black-and-white portrait of Salinger, and are lined with oak bookshelves bearing his books, the last of which was published in 1963. The movie’s settings, scenes, and characters are swathed in the rich jewel tones of the author’s book covers—ochre, ruby, emerald, sapphire. In both the My Salinger Year book and the movie, the stiff stuffiness of the literary world colors Rakoff’s experiences with a certain romance. But while the book treats Rakoff’s job as context, the movie treats it as her identity.

Rakoff’s memoir allowed her to own her story, but the movie often positions her as a secondary character in the stories of the people around her. Each character—especially Joanna—is glimpsed too briefly to become complete. The movie is too busy paying respect to other writers—Salinger, Rachel Cusk, Judy Blume, Joanna’s boyfriend Don, and people all over the world who wrote fan letters to Salinger—to pay sufficient respect to the writer of its own source material. Above all, the movie itself comes across as a fan letter to Salinger. In a 90-minute movie based upon a 274-page book, let alone a memoir, screen time is precious and must remain focused on the point. The letters fans wrote to Salinger and the replies Rakoff wrote back are a prominent plot point in the book, but they are not the point.  The movie’s attempt to connect the dots between Salinger, agency employees, fan mail writers, and Joanna’s lovers and friends fails to form a cohesive picture of Joanna herself.

Of course, it could be argued that Joanna’s story being stifled by others’ is the central theme of both the book and the movie. “All day we sat, our legs crossed at the knee, on our swivel chairs, answering the call of our bosses, ushering in writers with the correct mixture of enthusiasm and remove,” Rakoff writes in her memoir, “never belying the fact that we got into this business… because we wanted to be writers ourselves.” The movie retains the book’s basic plot in terms of scenes and sequence. The disconnect is not in the scenes that appear, but in the point of view that is largely left out. Although the movie adaptation carries the tones and textures that brought the Agency to life in Rakoff’s memoir, it neglects to enliven Rakoff’s own voice.

The movie’s most shining moments are the few fleeting glimpses into Joanna’s reverie: eating $12 cheesecake in the Waldorf Astoria to the tune of “Moon River”; tearfully watching her ex-boyfriend, Karl, play “Claire de Lune” on the clarinet in a church; a joyful waltz with Karl back at the Waldorf. Still, not much is revealed about Joanna—her motivations, her fears—other than her yet-unmet writerly aspirations and which authors she prefers to read while waiting for the subway. My Salinger Year is a deeply introspective book and, as Salinger said of Catcher, the weight of it lies in the narrator’s voice and thoughts. Without these elements at the fore, the movie feels flimsy.

In obscuring Rakoff’s voice, the My Salinger Year adaptation sometimes comes across like poor writing—stilted, disjointed, and half-formed. Its greatest mistake, though, is presenting Rakoff herself as a blank page.

Does "The U.S. Vs. Billie Holiday" Give Holiday's Legacy The Justice It Deserves?