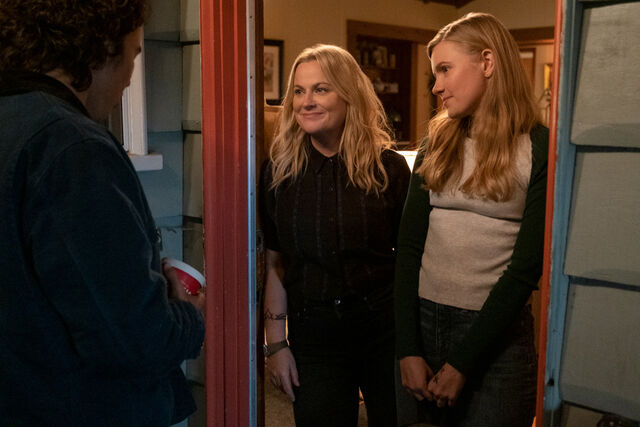 The dream of the ’90s is alive in Moxie. The new film, coming to Netflix March 3, follows a contemporary teen named Vivian as she leads a feminist revolt at her high school inspired by her mom’s old riot grrrl ’zines and music. Based on a YA novel by Jennifer Mathieu and directed by Amy Poehler (who also served as a producer and plays Vivian’s mom), the movie is a heartfelt exploration of growing up and learning how to fight for yourself, with the added bonus of a Bikini Kill-driven soundtrack. “When you’re in high school, things matter,” says Poehler, 49, who made her young cast a playlist primer on the riot grrrl era. “So many films make fun of the importance of things when you’re that age, but what I’ve always loved about high-school movies is that you really feel like you were there. You cared as much as they did.” Here, she talks about her own school days and Moxie’s real-life parallels.

You signed on to produce and direct Moxie first. What made you decide you wanted to play Vivian’s mom, too?
I wasn’t thinking about that at first because I really like directing, but acting and directing at the same time is kind of difficult. I had done it with Wine Country and with episodes of TV, and I thought, “This’ll be so exciting to have a really young, enthusiastic, energetic cast that I can have fun with, and I don’t have to participate in any of the acting part.” But then, as we developed the character, I felt like I understood her.

“So many films make fun of the importance of things when you’re that age, but what I’ve always loved about high-school movies is that you really feel like you were there.”

What’s the 2021 equivalent of a ’zine?
Fuck it, I’m not gonna say I’m too old for this—I think it might be TikTok. I mean it! You start falling into these places where you can find like-minded people, or people who are different than you are who open your eyes up to new stuff. There’s some version of that where people start to hear very specific, individual voices and experiences which feel universal. I know that’s not the real activist, indie answer. But just from a global perspective of “Where are my people?” that might be one.

How did high-school Amy respond to sexist school dress codes like the one depicted in the movie?
I didn’t really experience that, but so many members of the cast had. Everything that we deal with in the film, whether it be young women feeling like their voice aren’t heard in the classroom, to dress code stuff, to student elections feeling unfair, to female administrators not taking women’s problems seriously—every time we would film a scene, the next day we would see in the news a very real example of that. When we were touring some high schools to shoot at, we had a moment where a principal said, “Excuse me one second,” and turned to a girl and said, “You have to zip up that hoodie.”

Did you have any input into your character’s amazing collection of band T-shirts?
Yeah, I did! We talked a lot about that. Even though in the real ’90s I wasn’t actually in the pit, I did get a chance to see music, and I was always really, really proud of the fact that I had a T-shirt to prove it. That doesn’t go away even when you’re in your late 40s. I can remember very distinctly getting my Bon Jovi and Bryan Adams T-shirts—which I know is not very punk rock, don’t get me wrong—but I can remember being so psyched to roll up the sleeves and wear one the next day in school.
–Eliza C. Thompson

Miranda July's Amazing New Film "Kajillionaire" Premieres Today And She Gave BUST The Inside Scoop On The "Poptarts" Podcast!