Emma Seligman's "Shiva Baby" Is A Screenshot Of Prolonged Adolescence In The Information Age: BUST Interview 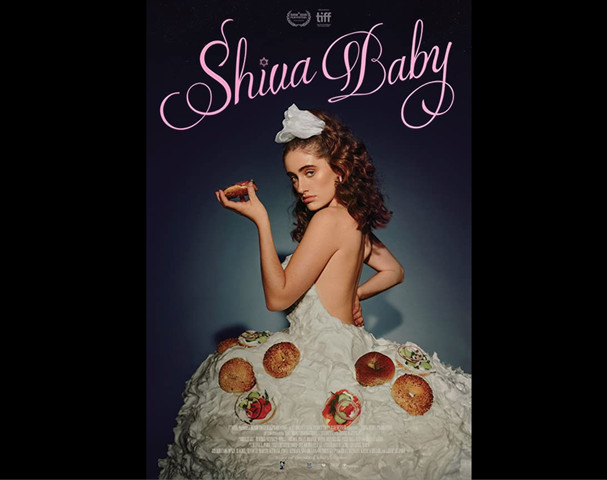 Has there ever been a more commonly visited scene in cinema than that of a funeral? The standing-over-the-casket, femme-fatale-in-a-black-netted-veil, umbrellas-shielding-the-protagonist-from-convenient-rain, religious-figure-droning-on-in-a-somber-tone image is overdone, to say the least, but writer-director Emma Seligman completely inverts this quotidien display in favor of a helter-skelter shiva in her debut film, Shiva Baby. In fact, almost this entire movie takes place at the shiva reception, inside a cramped home filled to the brim with rambunctious guests.

At only 25 years old, Seligman makes a cinematic splash with Shiva Baby, a story that alludes to the coming-of-age narrative that it could be while straying from the quintessential norms of one. Shiva Baby’s protagonist, Danielle (Rachel Sennott), is a young woman about to graduate from college with her bachelor’s degree; your guess is as good as mine when it comes down to what her major is, exactly (though it has something to do with gender… or business... or comedy). While attending a shiva with her intrusive parents, Danielle not only encounters her ex-girlfriend, Maya (Molly Gordon), but also her current sugar daddy, Max (Danny Deferrari)—along with his wife and baby.

The stakes of Danielle’s own relationships, concerning her community and her parents and her ex and her current fling, begin to show cracks. The cocksure Danielle introduced to us is slowly stripped away, revealing a mercurial, aimless, and desperately uncertain adolescent. A child who is grasping for an adulthood that doesn’t seem within reach. On this theme of prolonged adolescence, Seligman tells BUST:

“I tried to focus in more on growing up in terms of a sexual growing up moment. And for Danielle, it’s realizing that your sexuality can’t get you everything you want, or that it’s limited. I tried to let that be the base of her ‘I’m not ready for this other world where I have to be this adult and make decisions and not rely on my friends or sex or whatever.’ I don’t think I thought too hard about that moment in time just because I just thought it was going to radiate through no matter what, because when I was making the short I was a senior. And I didn’t think about any of the themes or messaging. I was like, ‘It’s just gonna be a comedy.’ Then, only later I was like, ‘Oh, I was putting so much of my insecurities and anxieties into it. But I just wasn’t realizing.’”

The events that play out are something of a tragi-comic convergence of different points of apprehension Danielle is currently attempting to balance. Her life reaches a crossroads at the place where her friends and family have gathered to reflect upon the life and death of someone else. This space of reflection, an Ashkenazi shiva, offers a refreshing portrait of the Brooklyn Jewish community for the common viewer.

As a comedy, Shiva Baby doesn’t pander to any gentile audience. However, the universality of Danielle’s struggles and of its humor makes it an accessible watch. Likewise, this movie doesn’t distract from showing common Jewish traditions that may be less conventional in a movie. There are scenes of rabbi-led tefillah and of kissing the Torah after it falls to the ground; these scenes aren’t a spectacle. They just are. Yes, Shiva Baby is illustrative of the representational epoch we are currently experiencing in cinema. It’s objectively interesting to choose such a time-honored traditional setting as the territory for such a modern narrative. But, as Seligman clarifies, this story was always meant to be one deeply rooted in her own reality.

“I just wanted to be as authentic to my experience and how I feel right now as possible. [...] I wasn’t thinking about, ‘Oh, she’s using an app and she’s in Gallatin or whatever individual study sort of program, and that’s gonna contrast this traditional community.’ But, I think that just ended up happening naturally because that’s just what’s happening when you’re the young, modern person trying to figure out your life in a community that has older, traditional standards of what it means to be a successful person. Those traditions and expectations are still… they’re persevering despite the fact that our world as millennials is crazy and much harder to get a job in, et cetera. The expectations are becoming a doctor or a lawyer and having a steady boyfriend or girlfriend that you’re going to marry eventually. We still have them, for whatever reason. So it does feel like this clash.”

Although there are many climactic moments within Shiva Baby’s run time, one scene stands out as particularly significant. Danielle stands in the host’s narrow bathroom, where she struggles out of her shirt and bra to take a shirtless mirror selfie. She proceeds to text these photos to Max, whose wife had just arrived. Danielle had entered the restroom to take care of a scratch on her leg, but leaves having taken a risqué photograph. Her phone lies forgotten on the window ledge.

Danielle clearly occupies the space between adolescence and adulthood, on the precipice of being the grown-up she thinks she already is. Yet, she mostly disregards her injury. That, paired with the childishness of taking such an awkward, immature photo (where she uses her arm to cover her chest, even), points to a deep-seated clutch of infantile self-preservation. When Danielle emerges from the bathroom, phone-less and bare-legged, she is no longer connected to the app she uses to connect with potential sugar daddies, and her wound is on display.

Regarding how this undercurrent of technological anxiety entangled with reliance that’s woven throughout the plot of Shiva Baby affects contemporary dating culture, specifically for young women, Seligman offers ambivalent feedback:

“Tinder kind of got popular when I was a sophomore in college, and I think already it was starting to adapt because [...] it just feels like college is just completely soaked up in hookup culture, at least in New York. When I talk to people who are older than me, there is a little bit of a difference in that I think that they remember more people dating. And I can’t remember anyone being in a relationship. I remember so many of my friends—especially my female friends—wanting the dudes they were hooking up with, wanting to date them, and it just wasn’t happening. So I do think more people turn to apps, and I do think that in some way—I don’t wanna be like, ‘Kids these days’—but when you grow up with an app it feels so natural to you. So I think that it just sort of adapted from the like, ‘Well, we’re all hooking up anyway, and I’m trying. Let’s just scavenge. Let’s just find people.’ As opposed to it being more organic or meeting someone in class or in your dorm or whatever it is. And I think that’s a huge reason that sugaring has become so popular, because technology has made it so accessible with Seeking Arrangements being sort of the big game-changer. [...] I’m not an experienced sugar baby, but I really don’t think it would’ve blown up the way it has on college campuses, especially in New York, without Seeking Arrangements and websites like that.”

This same game of communicative hesitation and ambiguity further bleeds into characters’ physical interactions. Shiva Baby is a dialogue-heavy movie. However, in its absurdity, the most important things go unsaid. This concept is especially prevalent in the verisimilitude of the very Gen Z conversations between Danielle and Maya. Well, “conversation” is something of an exaggeration. When asked about how she was able to fashion such an engrossingly inhibitive dialogue between these two characters, Seligman reveals,

“Their relationship was the hardest to write because I wanted to portray a history there without being so expositional, being like, ‘Remember when you were my girlfriend?’ I just didn’t think that went along with the style of this movie, so that was really hard. I didn’t really think too hard about, This is gonna be a representation of how our generation talks to each other. I think, honestly, Molly and Rachel probably added the most to that. They made it their own, they ad-libbed a little bit, and they have their tones of voice. So I think they just did what they do naturally and what they felt was right. And again, I didn’t really think, ‘Oh this has to be so accurate for my generation.’ I just knew that I never, especially in college, felt comfortable communicating. And I think that technology and all this stuff that we’re talking about here completely adds to that. So I just knew they had a relationship where they didn’t communicate with each other, and they interpreted things that didn’t exist from a DM or a text or whatever it is. I just wanted to portray that because those are the sort of romantic relationships that I had been through. And so I was just putting that into theirs. When I think about it, I’m like, ‘Oh yeah, that’s sort of universal, or many people go through that kind of experience.’”

At the close of Shiva Baby, Danielle’s only option is to be solely dependent on the community literally encompassing her. This is not a story about an exceptional person; it is the story of a lost one.

You can watch Shiva Baby on Amazon or iTunes this Friday, April 2.

Female-Led Indie Movies Dominated Releases This Past Year: Here Are Ten You Should Watch (Without Going To The Theater)