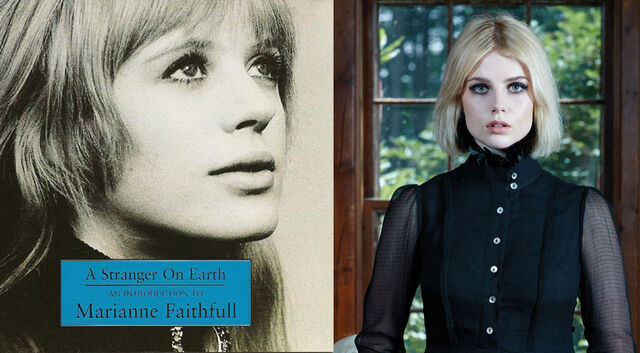 “In the 1960s, and until very recently, you could not be beautiful and clever at the same time,” Marianne Faithfull said in a 2020 Vogue interview. “If you were pretty, you were obviously just a bimbo. A dolly bird. A sex object. Blah blah blah. And that was obviously why Mick [Jagger] liked me, at least that’s what they thought. But it wasn’t.”

Faithfull’s excellent 1994 autobiography, Faithfull, told her side of the story and, after years in development, her story is coming to the silver screen via a biopic of the same name. In February 2020, it was announced that actor Lucy Boynton would star in the titular role. Boynton is known for her work as Freddie Mercury’s ex-wife, Mary Austin, in Bohemian Rhapsody (2018). Her role as Faithfull will return her to the iconic rock n’ roll scene of 1960s London.

In the ‘60s, Faithfull made a name for herself as a singer-songwriter and actor after her 1960 breakout hit “As Tears Go By.” But loud headlines shrank her down to the labels of “muse,” “groupie,” “Mick Jagger’s girlfriend” and, later, “drug addict.” These labels overshadowed her position as one of the key women of the 1960s British Invasion in music and culture.

Boynton recognizes the central role Faithfull played in ‘60s counterculture, and the ripple effect the decade created. “London in the ’60s is such a fascinating time to explore because it was right at the center of rock and roll,” she said in an interview with Vanity Fair in November 2020. “It was at the forefront of such a new era—youth as a kind of currency and the shedding of tradition. The implications of that free love era are so interesting to investigate, considering it was a catalyst for so much of how we live now. And then, of course, there's this girl-woman at the very center of all of that—right in the thick of some of the most iconic moments of that time.”

Boynton and Faithfull managed to meet just prior to the pandemic’s hostile takeover of the world, in February 2020, at a runway show held by fashion house Chloé. “It’s kind of like your favorite character from a book coming to life,” Boynton told Vanity Fair of their meeting. “Having spent so many months reading about her life and her world, it was then very strange to be sharing the same space and time with her… [It was] totally surreal.”

While Faithfull was set to begin filming in the fall of 2020, the coronavirus lockdown brought those plans to a halt. “I’m trying to look at that as a positive, and see that as just the opportunity to give us more time to prepare and make it even better,” Boynton told Vanity Fair.

Back in April, Faithfull fell ill with COVID-19 and spent 22 days in the hospital. She was not expected to survive the virus, but she did—albeit with memory loss and lasting fatigue and lung issues. Though she still needed to receive supplemental oxygen, she swiftly returned to work to finish her album, She Walks in Beauty, to be released on April 30. When asked about the forthcoming biopic during a January 2021 interview with The Guardian, Faithfull said, “It could be really good, but it doesn’t require my artistic input – I lived the life, that’s enough.”

Faithfull is rumored to start filming this year, but its release date remains unknown.

Five Women Who Shaped Motown Soul: Not Just Pretty Faces, but the Heart of Hitsville U.S.A.

Tags: Marianne Faithfull , Lucy Boynton , Bohemian Rhapsody , biopic
Support Feminist Media!
During these troubling political times, independent feminist media is more vital than ever. If our bold, uncensored reporting on women’s issues is important to you, please consider making a donation of $5, $25, $50, or whatever you can afford, to protect and sustain BUST.com.
Thanks so much—we can’t spell BUST without U.