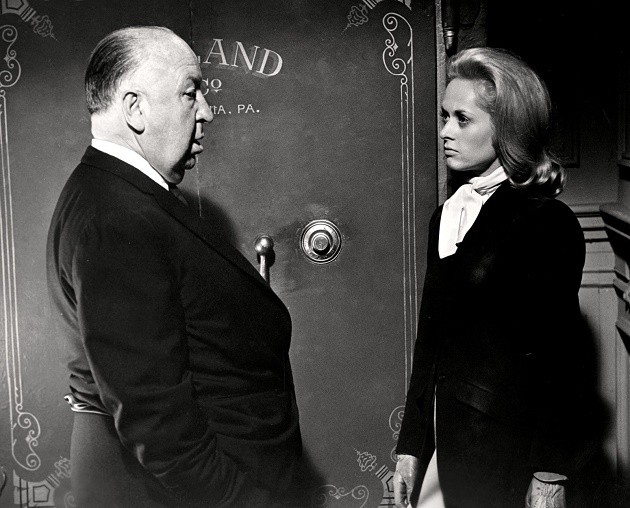 “Blondes make the best victims,” Alfred Hitchcock said in 1977. “They’re like virgin snow that shows up the bloody footprints.”

In Hitchcock’s 1963 film The Birds, protagonist Melanie Daniels screams as crows, gulls, and ravens scratch at her until she bleeds. Leading lady Tippi Hedren’s horror was real: filming the scene had a traumatic effect on her, and Hitchcock was well aware of it. Like his iconic thrillers, which are chilling through both violence and psychological torment, the story of Hitchcock and Hedren is, in some ways, a matter of life imitating art.

It all started in 1961, when Hitchcock spotted Hedren in a non-speaking role in a TV commercial for a diet drink. Hedren was 31 at the time, with a four-year-old daughter, Melanie (Griffith, whose own daughter is fellow actor Dakota Johnson). According to Vanity Fair, Hitchcock told his studio executives to “find the girl,” and she was paid the then-unheard-of sum of $25,000 for a screen test, even though she had never acted in a film before. A few days later, the director signed Hedren to a seven-year contract which, in effect, took control of her career and locked in her fate.

Prior to filming The Birds—Hedren’s first movie role ever—Hitchcock warned cast members not to “touch the girl,” per The New York Post. Whenever he saw her talking to another man, he would fix her with an icy stare. The director’s obsession with Hedren escalated fast, and before long, he was asking her to “touch him.” In her 2016 memoir, Tippi, Hedren recalled an incident in the back of a limousine, where Hitchcock flung himself on top of her and tried to kiss her. “It was an awful, awful moment I’ll always wish I could erase from my memory,” she wrote. Still, she kept quiet because “sexual harassment and stalking were terms that didn’t exist” at the time. She asked herself, “Which one of us was more valuable to the studio, him or me?” After that, her attitude toward him “chilled to a polite, professional distance.”

Hitchcock responded with revenge. While the birds used in the scene with the schoolchildren were comically obvious puppets on strings, Hitchcock insisted on using live birds in Hedren’s solo scenes after lying to her about using mechanical ones, according to Hedren. The actor wrote in her memoir that her experience shooting that scene was “brutal and ugly and relentless” (via USA Today). The shoot took seven days, which she deemed “the worst week of [her] life” (via The Virginian-Pilot).

In keeping with his aesthetic tastes as a director, Hitchcock reportedly had a morbid sense of humor. He presented Hedren’s daughter Melanie with a doll made to look like her mother, lying in a miniature coffin, which, of course, terrified Melanie. He gradually started seeking full control over his starlet, not only forbidding her from socializing with co-stars, but also choosing which clothes she wore in public.

Things simmered to a boil on the set of their second film together, Marnie (1964). According to Hedren, Hitchcock installed a secret door that joined his office to her dressing room, and he had the movie’s makeup team construct a mask of her face for his own personal ownership. He continued to ask her to touch him, confessed his love to her, and told her of his fantasies and dreams which involved her promising her eternal devotion to him. One day on set, Hitchcock “grabbed [Hedren] and put his hands on [her].” “It was sexual, it was perverse, and it was ugly, and I couldn’t have been more shocked or repulsed,” she wrote in Tippi. “The harder I fought him, the more aggressive he became. Then he started adding threats, as if he could do anything to me that was worse than what he was trying to do at that moment.”

When Hedren fought him off, Hitchcock reportedly said, “I’ll ruin your career.”

“When he told me that he would ruin me, I just told him [to] do what he had to do,” Hedren said in a 2017 interview with Variety. “I went out of the door and slammed it so hard that I looked back to see if it was still on its hinges.” The two never spoke directly to each other again, and Hitchcock made good on his promise by keeping her tied to her seven-year contract while refusing to cast her in major movie projects.

"Hitchcock was responsible for both starting my career and ending it," Hedren said in 2013. "After The Birds and Marnie, I was what they call 'hot' in Hollywood. Offers came from every studio. I did not want to work with him again, and I told him so. He told me he would ruin my career, and he did. He had me under a seven-year contract and simply informed the other studios that 'she is not available.'"

Once her contract with Hitchcock expired three years later, the now-38-year-old Hedren was finally cast in another film: Charlie Chaplin’s final feature, A Countess from Hong Kong (1967), alongside Marlon Brando and Sophia Loren. The film was a flop, and Hedren never again landed a role as substantial as the ones she had played in the two Hitchcock features. As Hitchcock had intended, Hedren’s acting career never recovered.

Though Hedren discussed the harassment from Hitchcock with colleagues in private after it happened, with the director’s biographer Donald Spoto in the early eighties, and in more detail in her memoir, the news drew backlash from Hitchcock historians. When asked for her response to their skepticism in an interview for Variety, Hedren said, “They weren’t there. How about that? I was the one living that life. They weren’t. How can they possibly have anything to say about it?”

So what motivated Hedren to speak about her experience so openly in 2016? “I wanted to let women, especially young women, know never to allow that kind of approach and to be forceful in telling people you’re not interested in having that kind of a relationship,” she said at the time. “It’s not a bad thing to say no.”

This particular horror story is all too familiar: A man propelled by the power of a major movie studio uses that power as leverage to demand sexual attention from an inexperienced actress, threatening to end her acting career if she does not comply. “I’m watching all the coverage on [Harvey] Weinstein,” Hedren wrote in a message she posted on Twitter in 2017. “This is nothing new, nor is it limited to the entertainment industry… It has taken 50 years, but it is about time that women started standing up for themselves as they appear to be doing in the Weinstein case. Good for them!”

Though Hedren has shifted her focus from acting, her post-Hollywood life has been remarkable. Today, the 91-year-old Hedren lives on her 80-acre Shambala Preserve in California’s Mojave Desert, where she has spent 50-plus years caring for endangered big cats rescued after being discarded by circuses, private owners, and zoos. As of 2013, Hedren was “den mother” to 42 cats who were “living out their lives in safety and comfort,” including African lions, Bengal and Siberian tigers, bobcats, leopards, and mountain lions. She has since joked that, while these cats were predators like Hitchcock, the director was “[not] as handsome as a lion or a tiger, for sure!”

“I’ve made it my mission ever since to see to it that while Hitchcock may have ruined my career,” Hedren wrote in her memoir, “I never gave him the power to ruin my life.”