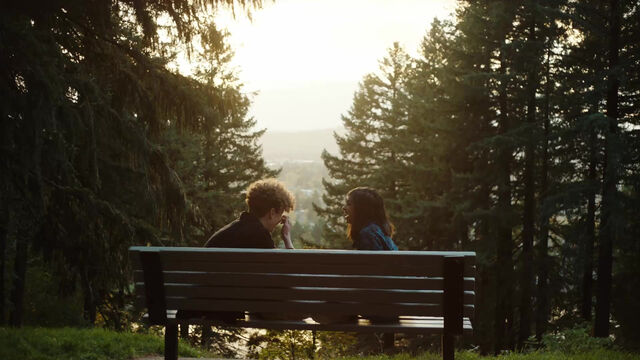 Produced by the Duplass brothers (The Skeleton Twins, Safety Not Guaranteed), Young Hearts follows teenage next-door neighbors Harper (Anjini Taneja Azhar) and Tilly (Quinn Liebling) as they embark on their first romantic relationship. Immediately, there’s a naive sweetness to the film — it’s captured in Tilly’s moon dog eyes while he stares at Harper across the library and in the light reflecting off of Harper’s clear braces when she laughs. There's also a complication: Tilly is Harper's older brother's best friend.

Their relationship is shown intimately and up-close — each double tap on Instagram and shallow conversation uttered between fourth and fifth period is rendered momentous. At times, it seems as though months have passed but the Halloween skeletons shown in the opening credits are still hung up, the autumn leaves still turning; viewers are as consumed by the relationship as Harper and Tilly are.

As with every high school romance, friendships and the pain of adolescence get in the way of their true love. Together, Harper and Tilly navigate sex, partnership and their identities in a way that is as awkward and charming as first love itself.

In "On the Rocks" Love Is Twisted, Rationalized, And Complex

Greta Gerwig on Directing her Oscar-Nominated Movie "Lady Bird" And Why She Doesn't Write Stories That Revolve Around Men: BUST Interview