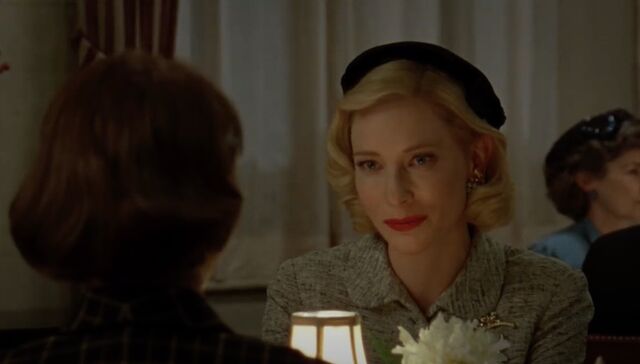 The Bechdel Test, created by Fun Home author Alison Bechdel, is a measure used in critiquing works of fiction. The test asks a simple question: does this work feature at least two women who talk to each other about something other than a man? In 1985, when the Bechdel Test was published, this idea was a novel and radical thought. The test gained popularity and ultimately became a fast-handed way to loosely assess a works of fiction. And although there are critiques of the test—mainly, two women talking about something other than man doesn’t necessarily make it feminist, while two women talking about men can be feminist—it’s a useful shorthand when thinking and writing about pop culture.

In recent years as I’ve watched more lesbian films arrive to the big screen, I’ve found myself wanting another version of the test—one specifically for critiquing lesbian cinema, a genre fraught with gloom and unhappy endings.

“Why?” I screamed at my television while watching the final scene of Ammonite. “Why do we have to endure another vague viewer-must-decide-how-they-ended ending?” I accepted the glacial pace of the film in exchange for a butch Kate Winslet and above average sex scene, but why do we have kept compromising in these films?

Historically, lesbian cinema refuses to give its audience a happy ending or a storyline not hinged on sexuality. And do we need so many corsets and bonnets? In the past two years alone, we’ve had FOUR major films that take place in colonial garments: Wild Nights with Emily, Portrait of a Lady on Fire, the Favourite, and Ammonite. (In the time I began writing this piece, another period drama, The World to Come, was announced, to begin streaming March 2021.) Not to mention, there hasn’t been a blockbuster lesbian film involving a woman of color in years. The most notable one in recent history was 2015’s Bessie, staring Queen Latifah. We deserve an Audre Lorde biopic starring Lena Waithe!

I propose a new test: the Gay Test, named aptly after Roxane Gay, patron saint of queer women, writing, and critiquing the arts. In order to pass the Gay Test, a lesbian film would have to meet the following criteria:

1. A lesbian character does not enter the relationship dating or married to a man
2. Neither lead character dies
3. There is no secrecy or scandal in sexual orientation
4. There is a concrete and “happy” ending

For context, here are 10 lesbian movies and their scores on the Gay Test:

I searched and cannot find one film scoring higher than a three. How refreshing would it be to see a romantic comedy between two women? No, Kissing Jessica Stein doesn’t count, scoring a mere 1 out of 4. I know we lesbians are an emotional species, but do we have to always be written as a drama? If someone knows a film scoring a 4 out of 4, please contact me immediately. In the meantime, I hope someone gets to writing.