Writer/director Ekwa Msangi’s feature film debut, Farewell Amor, follows an Angolan family as they attempt to reconnect after almost two decades living on different continents. Walter (Ntare Mwine) and Esther (Zainab Jah) met and fell in love in Angola during the Civil War. While Esther and their daughter, Sylvia (Jayme Lawson), stayed as refugees in Tanzania, Walter immigrated to New York City alone to create a home for the family. When the audience meets this family, Walter is picking up Esther and Sylvia from the airport after 17 years of separation.

The film, which premiered at Sundance 2020 and was bought by IFC films for digital release on December 11, is structured in three parts, showing the same scenes through the perspective of each character: Walter, Sylvia, and finally, Esther. Sylvia was only an infant when Walter left and now, as a teenager, she struggles to find her niche both at home and at her new Brooklyn high school. Meanwhile Esther, who cannot work in the United States because of her visa status, spends her days at home, slowly beginning to regret the move to New York.

Msangi, who is a lover of the traditional Angolan dance Kizomba, highlights dance in her film as the way for this family to reconnect with each other and with their homeland. 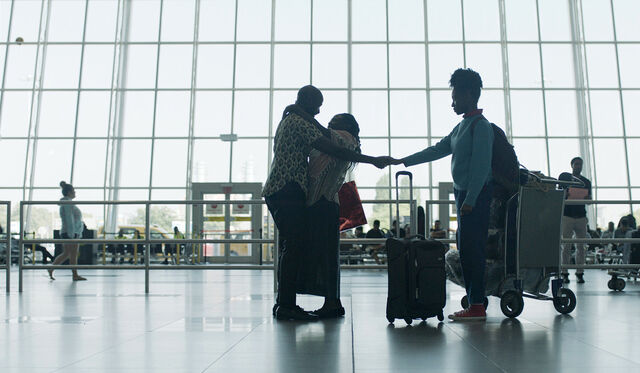 Farewell Amor marks an exciting feature film debut for Msangi and a film acting first for Lawson, who is set to act in the 2022 Batman film alongside Robert Pattinson. The rich narrative, enhanced by intimate camerawork, drops the cliches of immigrant stories and shows the realities of a Black family in America learning to love one another again. In this exclusive interview, Msangi and Lawson chat about joining forces to create this stirring portrait of immigrant life.

The film has three parts, one for each member of the family. I'd like to start just by talking about the order you created. I'm curious about why we get Walter, then Sylvia, then Esther.

Msangi: Before I started writing the feature, I had started with a short film. That was Walter's story before he goes to the airport to pick up his family. And so it was kind of the most accessible at that point because I had been thinking about Walter all this time, but I was conflicted about making it his story because it seemed a little cliche to do a story about a guy who's had an affair and trying to figure out what to do with his life. I was interested in maybe having it also be his daughter's story so I decided to do both of them. And then it became kind of clear that the mom's story was the linchpin of both of their stories, and it didn't make sense not to have the mom.

In previous interviews, Jayme, you’ve talked about mothers in these stories often being demonized, but Esther is not. Instead, the women in this film are so resilient. Ekwa, what was it like writing these characters and what was your inspiration?

Msangi: For Esther's character, she's a lot like my aunties with the religious aspect. It is very easy to dismiss her as a religious zealot. Esther’s intensity with religion is so annoying until you really understand what's going on for her. Films about African women are always about female genital mutilation or being sold off to Boko Haram and, you know, that does happen in parts of the continent for sure, but Black women are also resilient. Black women everywhere. So yeah, we might have challenges but that doesn't mean we don't cry, make love, have children, have families, and enjoy life. 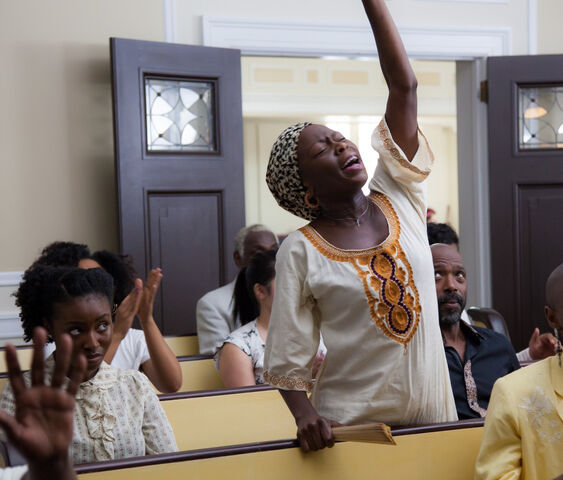 Jayme, how did you go about taking this story from script to full character?

Lawson: A lot of what I was trying to figure out was just how to navigate the medium because this was new. I had only ever experienced theater, so it was perfect timing because the character of Sylvia is in a position where she has to take in so much information, she has to process a lot and also observe. Everything is in her eyes. That's a wonderful place to be as an actress with this being your first film because I'm watching my fellow cast members and I'm stealing from them. I'm watching their relationship with the camera and with each other and learning from them.

What was it like learning the dance sequences to build Sylvia’s character?

Lawson: I was like zoned in, man. Those two weeks of rehearsal with Manuel [our choreographer] were intense and it was so important to me that I felt like the choreography belonged to me or else Sylvia isn't done justice. Because that's where we see her come alive, it's in the power behind her dancing and her movement. It was clear that if you didn't understand why she danced, you didn't understand her.

It really bothered me at points in the film that everyone is speaking for Sylvia all the time. I'm curious, Ekwa, why you wrote the script that way?

Msangi: It was a little bit of poking fun at what older people do to young women in particular, where they're like, "You want to be a doctor, right?" or "You want to get married?" You know, I grew up in East Africa in Kenya. I went to all girls' schools growing up, and it was always very interesting to me how so much of the thinking was done on behalf of women. Men would tell young women what they’re going to do and who they’re going to fall in love with and blah, blah, blah. And then you get to your 20s and people are like, "Well, what do you think?" And you're like, "I don't know, because I've never actually been asked what I think." Then people get really frustrated with women for not being able to voice their own thoughts.

The film isn't meant to ridicule Africans or African women for not being able to speak. With somebody like Esther, she might say something in the form of question as opposed to a statement as a form of soft power. I see this with my aunties all the time, where they are completely in charge of their households and their families, but it's never a demand. It's always a request or a suggestion. It's a way that people communicate and it just becomes part of culture. I wanted to include that for the female characters.

Jayme, because of your theater background, was it a difficult transition to employ mainly body language as your way of acting?

Lawson: Theater relies so heavily on language and that's why I fell in love with acting but I am also an actor who really lives in my body. To be able to tap more into that for this film was a gift. And because it's film, it's so intimate, and I hadn't yet got to really navigate that kind of intimacy and performance.

In the film, dance is Sylvia’s way of staying connected to Angola. Esther doesn’t want to lose Sylvia to the United States, but she also doesn’t want her to dance. Could you speak to that contradiction, Ekwa?

Msangi: Esther has found religion as her way of coping and as her way of survival, even though that's not necessarily where she came from. And all of a sudden, she’s taking on all of the beliefs. I also just imagined that there's such a sadness around not being able to have her dance partner, Walter, and that seeing Sylvia dance would bring up just so many memories of what her life used to be. Sylvia's power is being able to show herself completely in dance, but without Walter, Esther doesn’t know how to keep her safe. And so the only way that she can protect her is to keep her as locked up as possible. 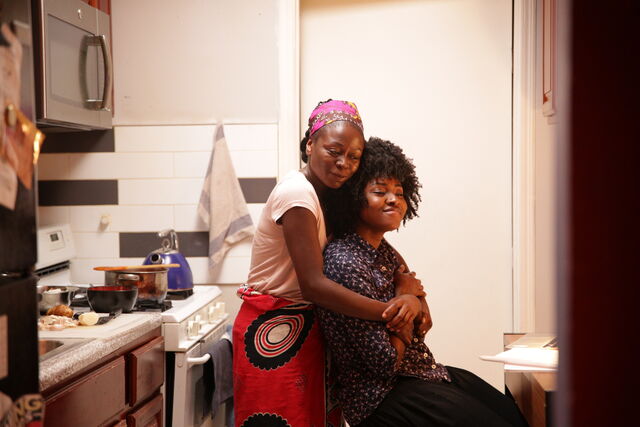 I think that's one of the things that makes this story feel universal—mother-daughter relationships are just hard, especially in high school. Jayme, how did you build intimacy with your character's mother, played by Zainab Jah?

Lawson: Thankfully, Ekwa allowed for the three of us—Zainab, Ntare Mwine, who played Walter, and myself—to get in a room, rehearse, and just talk about our characters. We would even re-enact phone conversations with different scenarios to build up the backstories, which was so necessary for this because there's a whole world experienced prior to that first interaction in the film: 17 years' worth. Esther is Sylvia’s best friend. It has been just her and her mom for 17 years, and you can't fake that. I'm so thankful that Ekwa provided the space for us to rehearse and just talk about it and develop it. And Zainab is just such an amazing person to be around so, you know, falling in love with my mother wasn't hard to do.

I think viewers might be surprised to find moments of comedy in the movie. Jayme, what was it like depicting funny moments with this character who is going through a lot emotionally?

Lawson: It was great because there is levity, right? There's still room for joy and laughter. One of my favorite scenes to film had to be with Marcus Scribner, who plays DJ, when DJ and Sylvia are chatting and Esther barges in. It was really hard not to laugh. That is just one of the more frightening experiences in life—when your mom comes in and interrupts, even when nothing's happening with a boy. You don't know how to explain it. I clung to the opportunity to find that joy. I think that's very important, especially when we're talking about immigrants, that we don't narrow the experience to being only one of horror or tragedy or difficulty.

What do you hope that audiences take from the film?

Msangi: I think one of my main goals was to express the humanity of African people, of immigrants. What do they have to give up in order to be here? People talk so much about all the things that immigrants take from us by being here, but what is it that they give up to be here and what is it that they bring? I also wanted to tell a story about love in a Black family that is fighting to be together, which is something we don't get to see that often.