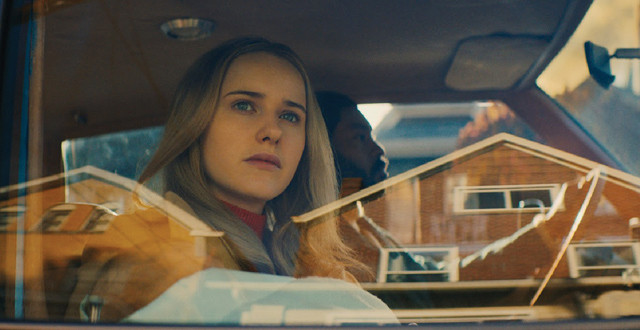 Rachel Brosnahan and Arinzé KeneI’m Your Woman takes well-worn crime tropes and turns them on their heads by centering typically supporting characters—the meek wife, the stoic henchman—and offering them a chance to redefine themselves. Jean (Rachel Brosnahan) is a glamorous ’70s housewife who’s sleepwalking through life until her husband Eddie brings home a baby. He doesn’t offer an explanation and Jean doesn’t press him—after all, being married to a criminal is full of surprises. But after one of Eddie’s murky deals goes south, she and the baby are forced to flee with Cal (Arinzé Kene)—a steely-eyed associate of her husband—who’s been sent to take them to a safe house. Left to her own devices, Jean struggles to become a caretaker in a world full of hidden dangers, unanswered questions, and some very bad men.

To reveal more would deprive the viewer of the main pleasure of this uneven film, which is how it manages to subvert expectations at every turn. From one minute to the next, it morphs from a quiet character study to a nerve-wracking drama with occasional bursts of bloody action. As the anchor of this film’s intimate cast, Brosnahan embodies a woman who transforms from someone who needs to be saved into someone who can save herself, and others as well. –Jenni Miller