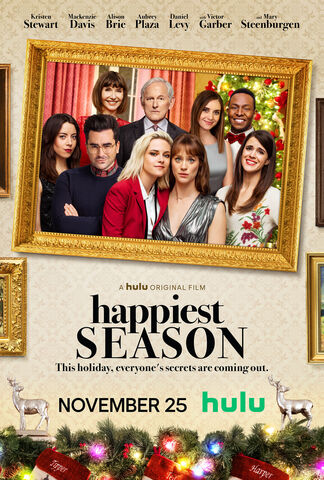 Clea DuVall is trailblazing queer Christmas rom-coms with Happiest Season (out on Hulu November 25), a coming out story that blends traditional home-for-the-holidays romance with the emotional depth of identity and self-acceptance. DuVall proves that both can exist, breaking away from a heteronormative love story while tapping into the season's cliché sappiness.

When Harper (Mackenzie Davis) invites her girlfriend Abby (Kristen Stewart) home for the holidays, she fails to mention one thing - that her family thinks Harper is straight and that Abby is her “orphan roommate”. Out of love, Abby agrees to follow suit, so long as Harper breaks the news by Christmas. The scheme sends the two of them down a path of hurdles as they navigate Harper’s concealed identity with ex-lovers (Jake McDorman and Aubrey Plaza), two sisters (Alison Brie and Mary Holland), and controlling parents (Mary Steenburgen and Victor Garber).

The tension between Harper and Abby rises, as Harper reverts to her family persona and Abby is cast astray, feeling wary and misunderstood. But in the spirit of holiday rom-coms, DuVall leads with humor. Abby clumsily slips up on lies, is taunted by Harper’s young niece and nephew, and is continuously checked-in on by best friend John (Daniel Levy), who is housesitting back home. John provides the comic relief of the story and is a testament to Abby’s truest self, a voice of reason amidst the Harper chaos. In the countdown to Christmas, Abby begins to sense broken promises and question Harper’s priorities, building up to a tinsel-flying fiasco of a climax during a game of White Elephant.

DuVall, who has been a prominent figure among the queer community since her role in But I’m A Cheerleader and has opened up about her coming out experience, shows the powerful grip that family ties can have on one's identity long into adulthood, not to mention when you're forced to reckon with them over the holidays. Despite the occasional catfight that borders on overdoing it, Happiest Season embeds queerness into the traditional Christmas tropes with playful candor and cheer, evolving the genre to embrace queer identities and stories.