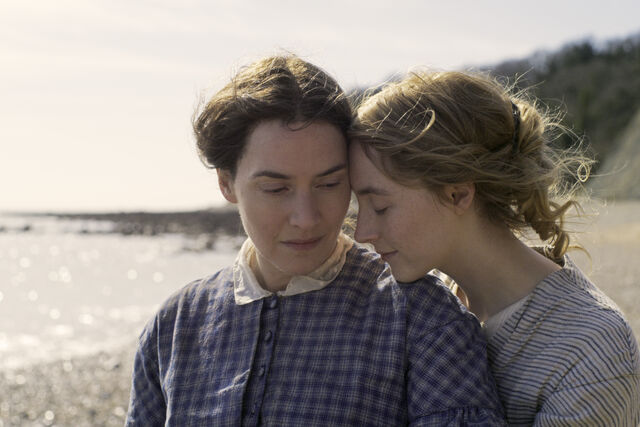 Mary Anning made her first discovery in 1811 at 12 years old, when her brother, Joseph, found a fossilized skull on the beaches of their seaside town of Lyme Regis in West Dorset, England. Over several months, Mary unearthed the near-complete skeleton of a marine reptile called an ichthyosaur. The death of Mary’s father, a cabinetmaker and fossil collector, left her family burdened with debt; the ichthyosaur had to be sold. Henry Henley, a local lord, bought it from the Annings for £23 and Mary’s discovery ended up in the British Museum in London.

Francis Lee’s Ammonite opens with Mary’s ichthyosaur being carefully set-up for display at the museum. We meet Mary, played by Kate Winslet, on the same beaches where she found the ichthyosaur 30 years prior. She has her skirts tucked into her undergarments to better scale the cliffs as she tries to unearth rocks lodged deep into the earth. It’s difficult work, but even when she tumbles down the cliff, it never feels like a struggle for Mary. Rather, everything she does, she does with care—her work is an act of love.

At the center of the film is a love story. While working at her storefront, Mary is visited by Roderick Murchison (James McArdle) and his wife, Charlotte (Saoirse Ronan). Roderick is a member of the Geological Society of London, a society which privileged aristocratic men and excluded women. Despite her major discoveries, Mary was never admitted into the Geological Society of London; it wasn’t until 1904 that women were even allowed at meetings. But Roderick has come to learn from her, and Mary reluctantly agrees.

Roderick returns to Mary’s shop with another favor. He hires Mary to have Charlotte accompany her in Lyme Regis, with the hope that the fresh sea air will help with his wife's depression. On their first day together, Charlotte takes little interest in Mary’s work. The real life Charlotte Murchison, however, was a successful geologist before the Murchison’s visit to Lyme Regis. She was even 11 years older than Mary, not 19 years younger like Ronan is to Winslet. The reason she stayed was not because she was suffering from melancholia, but so she could hunt for fossils and learn from Mary. Charlotte was the one who initially encouraged her husband to pursue a scientific career, out of her own interest in geology. But we don’t see this in Ammonite: Lee only gives us a faint outline of a meek and quiet Charlotte, instead of Charlotte Murchison herself.

The creative liberties Lee has taken with the real life biographies of his characters extend beyond Charlotte’s career choices. Mary and Charlotte were friends, but whether or not they were lovers is purely Lee’s own speculation. Why not make a film purely fictional and inspired by their lives, rather than a film that purports to actually be about the two women by using their real names? To reduce the meaningful friendship of the real life Mary and Charlotte to a love affair feels disrespectful. The film takes the assumption that a close friendship between two people must be sexual.

Ammonite follows in the footsteps of films like Yorgos Lanthimos’ The Favourite and Céline Sciamma’s Portrait of a Lady on Fire—period dramas that rightly emphasize the fact that lesbians have always existed. But they all depict white lesbians, dictating who is allowed to yearn in a way that is palatable for white audiences. Do we really need to be inventing lesbian love stories to project onto the lives of white women from history? What about the queer women of color whose stories still need to be told?

Mary Anning was a remarkable woman who devoted her life to what she loved most—palaeontology. Why not recognize her for who she really was instead of focusing on a romance? Her life was a life of loss. Lee brings Charlotte into Mary’s life as a remedy to this loss, but falling in love is not a cure for anything—a person’s happiness should never hinge on the love of a single person. Charlotte cannot reverse the death of Mary’s family; nor can she convince the scientific community that women deserve to be recognized for their work.

Lee’s Mary and Charlotte are simply two lonely people who, for a brief time, find a way to make each other feel a little less lonely. When Charlotte falls ill after bathing in cold waters, she becomes the responsibility of Mary. She nurtures Charlotte with ease, bathing her with warm cloths and watching over her as she sleeps. The most beautiful scenes in the film come from these silent moments, where nothing is said and nothing needs to be said. Charlotte's husband had abandoned her when she became an inconvenience to him, too difficult for him to help. But Mary, a near stranger, shows Charlotte the care and attention that she was lacking in her domestic life. Charlotte even begins to take a real interest in Mary’s work. They work together, both with their skirts tucked into their undergarments and their sleeves dirtied by the dense clay of the earth.

Just as Mary opens up Charlotte by caring for her, Charlotte does the same for Mary. The day that they unearth a large rock together, Mary is able to share what she loved with Charlotte. The moment they shared wasn’t a means to an end for Charlotte. She is unlike Roderick and the other aristocratic men who wanted to learn from Mary for their own gain; she sees her personhood.

But aside from those few moments, their love is empty. When Charlotte is called back home to London, their supposed passion culminates in a sex scene that seems unwarranted. Their connection does not feel specific, but rather, as if they are each filling a lonely void for the other. The love story feels like one Lee has invented for his own purposes, without fully recognizing Mary—but the more meaningful love story begins with Mary’s discovery of the ichthyosaur.

When Mother Is An Astronaut, In Alice Winocour's "Proxima:" BUST Interview