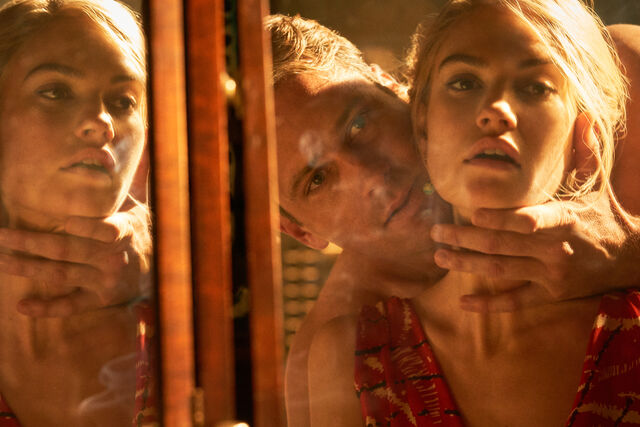 I first encountered Alfred Hitchcock’s original Rebecca in an undergraduate class that revolved around his films. Much of this class was particularly concerned with the women in Hitchcock’s films: his preoccupation with blondes, his use of homoerotic tension, and his treatment of his leading ladies came up in our discussions and readings often. Hitchcock’s treatment of actress Jean Fontaine, the leading lady of Rebecca, emerged to me as particularly noteworthy.

During their time filming, Hitchcock reportedly bullied Fontaine into believing that the cast and crew despised her in order to get the performance that he desired out of her. He succeeded in driving her to portray the meek and anxious character we see in the 1940 classic by disregarding Fontaine’s mental well-being. The heroine of both the Daphne Du Maurier novel and Hitchcock’s Rebecca, whose only acknowledged name is “the new Mrs. de Winter,” is treated as terribly by her fellow characters as her actress was treated by the original director. This bullying treatment of the heroine carries over into Wheatley’s new remake of the film, and this is just one of many subtle changes in the new film that reflect the way society, too, has changed in the past eighty years.

Rebecca tells the story of a young woman’s struggle to live up to the expectations set by her new husband’s previous wife, the titular Rebecca, who tragically drowned in the sea near their home. The protagonist fights to secure her husband, Maxim de Winter’s, affections first when they meet in France, and later when they arrive back at his grand inherited home. Throughout the film and novel, the heroine struggles to prove herself to her employer and later to the staff of her husband’s estate. In the beginning, her employer, Mrs. Van Hopper, berates her, repeatedly calling her a stupid girl and assuring her upon her engagement that Mr. de Winter could never lover her. The old Maxim–of the novel and also Hitchcock’s film–seems to support this assessment in his words and actions. He refers to the protagonist often as “child” and “little fool” in attempt to maintain the naïveté and innocence with which he is so taken. The coldness of her new husband, combined with the cruelty of the housekeeper, Mrs. Danvers, leaves the heroine feeling unloved and insecure. She compares herself to Rebecca endlessly, and feels her presence within the house.

The trailer for Netflix’s new version of Rebecca, directed by Ben Wheatley, finally motivated me to pick up the novel, after years of telling myself I would. The trailer promises the same eeriness, the same grandeur, the same patronizing male protagonist. The novel and original film contain these as well. Du Maurier’s prose oozes indulgent description, allowing the reader to be transported to Monte Carlo and later, to Manderley by the sea.

I found the novel contained the trademark intrigue and suspense of Gothic romances. (Some of the suspense was, of course, lost, since I already knew the twist, and in truth I found the scariest part to be the glaring mentions and moments of Black and brownface.) Unsurprisingly, through most of the novel, the male lead, Maxim, remained as unlikable to me as he was in the Hitchcock movie. He warms somewhat after he bears his heart to the main character three quarters of the way through, but otherwise presents as removed and condescending. He offers little to no comfort as the protagonist battles internal forces (feeling that she is inadequate and Rebecca’s memory looms over Maxim) and external forces (Mrs. Danvers’s not so subtle reminders that she is undeserving of Rebecca’s position).

Wheatley’s Rebecca does not diverge from the original much in plot. This remake contains the same cruel employer, the same handsome and tortured bachelor, the same unsettling housekeeper. Though these characters maintain their trademarks, the new actors do offer some changes. The protagonist’s employer, the American Mrs. Van Hopper (Ann Dowd), is here more cruel than embarrassing. The new Mrs. Danvers (Kristin Scott Thomas) is sullen and dark, but more matronly than overtly obsessed with the late Rebecca. Hammer’s new Maxim lacks the condescension and much of the coldness experienced in Hitchcock’s version as well as in the novel.

I found myself relieved that the filmmakers rejected many of the qualities in Maxim that I found so antithetical to romantic in the previous versions. In Wheatley’s version, Maxim demonstrates more tenderness toward our protagonist in the first hour of the film and onward. Hitchcock’s Maxim (Laurence Olivier) is not even in the room when he proposes; Wheatley’s Maxim (Armie Hammer) at least seems to be speaking in tender jest when he drops the famous line, “I’m asking you to marry me, you little fool.” He and the new Mrs. de Winter exert more physical affection as well, an alteration necessary in order to make new audiences believe in sincerity of their whirlwind romance. These changes make it easier to believe that Maxim may indeed love the protagonist (Lily James).

The protagonist, who remains unnamed, also looks different in James’s portrayal. She still wears a fearful expression for much of the movie and possesses the same awkwardness attributed to her character in previous renditions, but does not possess the utter smallness of presence and lack of confidence we saw in Hitchcock’s version. In part, this is likely the result of the directorial difference, as Wheatley probably did not routinely bully James to turn her into a woman so unsure of herself as Fontaine’s character was. But the new script reflects this confidence, too, as we see the new Mrs. de Winter even attempt to stand up to Mrs. Danvers earlier in the film.

I found myself wondering why these changes had to happen in order to make the film palatable to contemporary audiences. I reflected on a work of scholarship about the original Rebecca film, “Woman and the Labyrinth: Rebecca” from Tania Modleski’s The Women Who Knew Too Much: Hitchcock and Feminist Theory. Modleski provides information about the tension between Hitchcock and producer, David O. Selznick (Gone With the Wind, A Star is Born) regarding the script. Hitchcock attempted to dispel some of what he considered “novelettish” femininity from the script by adding scenes more of the “male” humor – aka, vomiting scenes. Selznick would not allow this. He felt it important that the movie remain true to the novel in order to capture female viewers. He argued that the protagonist’s self-consciousness and awkwardness are what made women watching say, “I know just how she feels.”

This knowledge helped enlighten me on the changes that were made to the new film. Contemporary viewers wouldn’t identify with a woman who fell in love with a man who showed her no affection, one who patronized her to no end, a woman who happily turned victim to the attacks of Mrs. Van Hopper and Mrs. Danvers without a word to say for herself. Furthermore, viewers of today would not identify with a man who did not demonstrate physical affection toward his new wife (especially if that new wife is Lily James). It became necessary for the makers of the remake to alter the characters so that today’s audience might be able to see themselves in their place.

Despite the changes, much of the story’s sexism remains. Woman is pitted against dead woman, and Rebecca is revealed to be the villain, Mrs. Danvers her grim assistant. As Modleski points out about the original film, the female ideal in this film continues to be: she who possesses no identity (the protagonist). She who is absorbed by her husband, a nameless “mademoiselle” until she becomes the new Mrs. de Winter. Rebecca remains evil and better off dead because she dared assert her personality over her husbands, and furthermore, dared be the scariest thing of all: slutty. Whorephobia is as present today as it was eighty years ago, a fact present in the art itself but is also reflected in the way the press has recently approached Lily James in light of speculation regarding her behavior toward married costars. As far as the press is concerned, the men lack any responsibility when posed against the sexualized and flirtatious woman. This is not so different from the way the male sexuality is threatened by the ghost of the promiscuous Rebecca.

With these improvements to the characters, why then did I enjoy the film so much less than I enjoyed Hitchcock’s? Why did I view Maxim as less appealing? Perhaps the new Maxim is too familiar to me: he remains occasionally aloof and at times severely unkind, one would not be incorrect in deeming him emotionally stunted, but he is more capable of giving the heroine the affection she craves than the old Maxims. I would struggle to find a woman today who has not encountered a man such as this; one who craves admiration but struggles to express his interiority. This version sacrifices much of the suspense because the heroine is less tortured by the lack of her husband’s affection. Additionally, Mrs. Danvers’s grief is more altruistic when it is rooted in maternal instincts, the feeling that she lost her daughter figure, more than it is rooted in the loss of the object of her obsession — which is inherently more unnerving.

What's The Deal With "Cuties"

Jozie is a writer and editor with an MFA in creative writing from Hollins University. Poetry, plants, and feminism are among her passions. You can find more of her work at joziekonczal.squarespace.com.