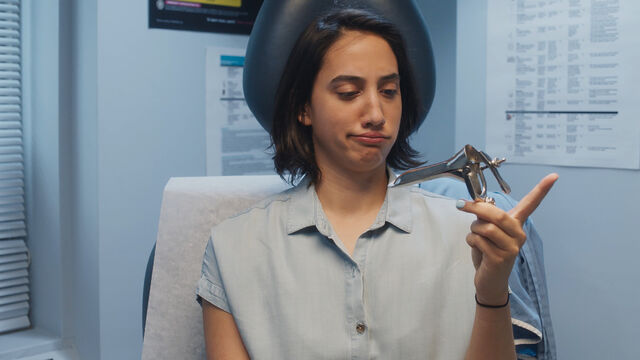 In one of the first scenes of “Lady Liberty,” Shea (Julia Lindon) awkwardly comes out to her gynecologist, who is painfully unprepared for the news. Shea saying “no penis” to indicate that her sexual partner doesn’t need to be using condoms is perhaps the funniest line of the whole short film. Lindon, who plays the main character, is also the writer and producer of the short, which premiered at Tribeca TV last year.

Unfortunately for her, this scene was mined from Lindon’s own experience at a gynecologist's office. “It's awkward and it's weird, but when we've been able to share the film with people, a lot of women are like ‘I had that same exact experience’ or ‘Oh my God, that would never happen. Did that happen?’” Lindon said in an interview with BUST.

The rest of the film, inspired by Lindon’s real-life coming out experiences, follows Shea, an assistant to comedian Tommy Danes, played by Jason Sudeikis. Lindon herself was Sudeikis’s assistant and worked on the production teams for Saturday Night Live, Detroiters, and Last Man On Earth, among others. The director of the film, Taylor Lee Nagel, has a background in documentary filmmaking and is a co-founder of Raw Milk Films. The two creatives came together to tell Shea’s journey as a ‘gayby’ or ‘gay baby,’ as a well-meaning ride sharing companion calls her, with all the awkwardness of a mid-20’s sexual awakening. The film was selected for the Oaxaca, New Hampshire, and the L.A. Indie film festivals.

An aspiring comedian learns to embrace her queerness and finds her comedic voice and, more importantly, her community in LADY LIBERTY, a coming-out/coming-of-age comedy by @IAmJuliaLindon and Taylor Lee Nagel. See it as part of #Tribeca2019's Pilot Season: https://t.co/PDiKo8IuwL pic.twitter.com/cQpDS5PXwm

“There are a lot of coming out stories, coming out scenes and moments [in film], but something I really care about is the process of it, and this is just the beginning,” Lindon says. “The comedy with the gyno: it's funny, and it's raw, and it's painful, but Shea’s gonna have to do that over and over with all different types of people in her life. At a certain point you have to laugh at the absurdity of that.” The film uses iconic LBGTQ+ signposts like the West Village in Manhattan, once called the ‘Gay Village,’ shots of the Stonewall Inn, and the inclusion of a lesbian bar to cement all the newness of Shea’s coming out.

More interesting to the clued-in viewer are all the smaller meme-like references to the queer community. In the beginning of the short, Shea is gifted a three-sizes too big bomber jacket that signals her first aesthetic switch to queerness that any millennial would recognize. She’s in love with her iced coffee and later in the episode attempts a half-up, half-down top knot hairstyle that never comes to fruition.

The audience watches Shea try on, adopt, and occasionally abandon young lesbian calling cards that give a cute wink to the knowing audience and a visual journey to everyone else. Lindon says, “Those are fun to pick out like ‘yes, that's me,’ and that’s also universal, so those get to stay without me even knowing I’m making a meme statement.” She adds, “Everyone is trying to perfect their own queer hairstyle over time. It's a process, and I won't claim to have figured it out, especially during this quarantine.”

ACT. NATURAL. What a night! The @tribeca premiere of #LadyLiberty was all we hoped ‘n’ dreamed ‘n’ more. Thank you to EVERYONE & catch our second screening at Regal Cinemas Battery Park on Saturday, May 4 at 8pm 🗽 #Tribeca2019 #TribecaTV #PilotSeason #RedCarpet #OpeningNight #Premiere @notgracechu on the camera

Shea doesn’t figure it all out by the time the 26-minute short ends, and that’s alright. She’s on a journey, just like Lindon is, and just like we all are. The film ends with Shea drunkenly running onto a ferry, holding a dramatic photoshoot with Lady Liberty, and receiving a text from her maybe ex-girlfriend. “Leave The Light On” by the band Overcoats, a personal favorite of Lindon and Nagel, plays in the background with the repetitive line, “leave the light on for myself when I come home,” beautifully embracing the freedom Shea feels. It is only the beginning of Shea’s journey as a queer woman, but it's an exciting one, even if it is scary.

Lindon hopes the film resonates with everyone in this current moment of a global pandemic. She says, “Shea’s the kind of a person we can all put ourselves into. We’re all in this ridiculous new experience now... I think I want the audience to just get in touch with vulnerability—seeing the things we’re scared of but then facing them and finding community, lightness, humor and heart in that.”

You can watch the film here: