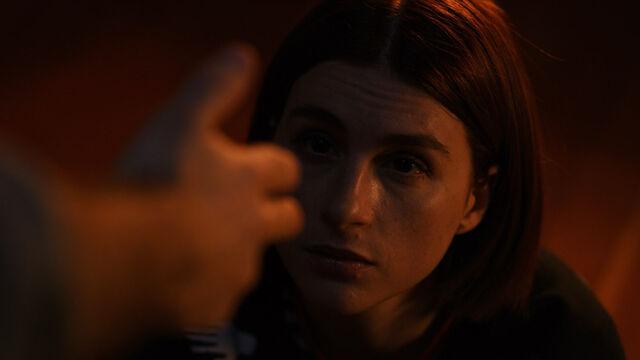 The frightful cocktail of sitting by a fire on a cold winter's night, eyes aglow with flickering flames while sharing scary stories sounds like any child’s Halloween dream. Josh Ruben’s new film, released on Shudder October 1, is called Scare Me and takes this recipe seriously, outfitting the film with eerie music, jump scares and skin-prickling tension.

His tale, first released at Sundance Film Festival in January, only has four characters, Fanny (Aya Cash), Fred (Josh Ruben), Carlo (Chris Redd) and Bettina, the driver (Rebecca Drysdale). The surprisingly funny film follows two horror writers, Fanny and Fred, as they get stuck in a cabin together after the power goes out on their respective solo writing retreats. As the two get to know each other, it turns out that Fanny has critically acclaimed horror writing under her belt and Fred is in way over his head, no matter how hard he tries to make up for his storytelling deficiencies with machismo.

Fanny is funny, extremely intelligent and calmly assertive. In the face of her measured confidence, Fred begins to boil. He can’t handle Fanny’s success in the face of his mediocrity, which builds the core horror of the film as his anger builds to truly terrifying heights. Aya Cash, who portrays Stormfront on Amazon Prime’s The Boys, wasn’t always able to find complex and challenging female characters, like Fanny, to play. “I mean I played prostitutes, and there’s nothing wrong with playing a prostitute but there is something wrong with playing a prostitute with no name,” she told BUST over the phone. “I have definitely turned down roles because I found the female roles offensive or just there to be fucked...but that is a privilege that I have because I now have financial stability.”

This privilege has allowed Cash to pursue projects like Scare Me that use both comedy and horror to tell stories rich with social and political commentary. Fanny tells inventive spooky stories that comment on gendered oppression like that of a creepy grandpa all while Fred continues to push for apolitical, and boring, scary stories of his own. 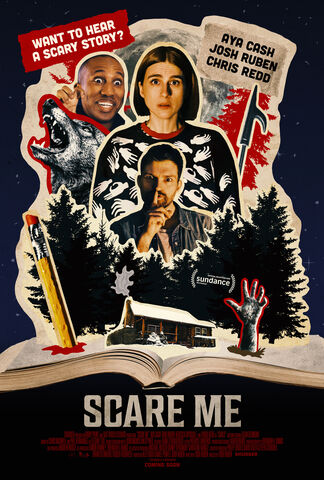 Some of the commentary is overt like Fanny continually demanding to not be interrupted, but the most masterful social observations are smaller and harder to pin down. Fred can’t start the fire but Fanny does it quickly. When they want to order pizza, Fred stumbles around looking for his cabin’s address while Fanny easily finds it. Fred’s frustration at her competence is almost more bone chilling than the frightful stories themselves. When the pizza arrives with Carlo, Fred’s feeling finally gets a name: emasculation.

The film's setting is frightening, the dramatic acting from Cash and Ruben is unnerving and the comedy, introduced by Carlo, is a delightful surprise. Fanny and Carlo get along so well, giggling about Fred’s anger and using campy humor to call out the film’s major themes. Cash says that this comedy is the “spoonful of sugar” that helps the medicine of social commentary go down. “Comedy is like how you can sprinkle a little magic dust on top to allow people to listen better … it's a way to talk about feminism and misogyny without browbeating and without saying ‘this is what is wrong.’ It's sort of a little side nudge as opposed to a beating over the head,” Cash said.

And although she doesn’t see herself as a comedian she does a masterful job with it. The beauty of Fanny is in the small things: the way she pays no mind to Fred’s frustration, her genuine intent to scare Fred and how she calls Carlo, ‘sweetie.’ Cash says this particular role reversal is a result of her experience with misogyny. “I get called sweetie a lot. I'm someone who for many years has looked younger than my actual age,” she said. “I am so reactive to older men who talk down to me and I get very upset with that because that's my entire life.”

“Scare Me” may surprise viewers but it's unpredictability is a gift that keeps on giving even after the film is over. As the scary stories wrap up and the film hits its own crescendo, earlier scenes in the movie come into sharper focus. With the whole work in view, it is easier to see that what’s really terrifying about the film is Fred’s breakdown in the face of a woman who makes him realize his own mediocrity. And, really, what good feminist wouldn’t enjoy watching that?