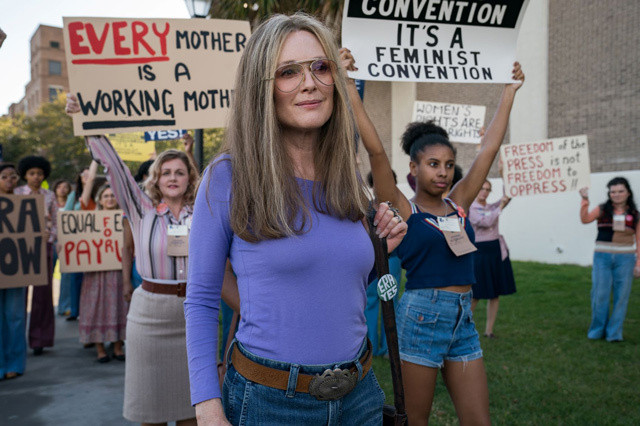 IF MRS. AMERICA on FX whet your appetite for boundary-busting scenes from feminist icon Gloria Steinem’s life, then The Glorias, based on Steinem’s memoir, My Life on the Road, should be next on your watch list. Starring Ryan Kiera Armstrong, Lulu Wilson, Alicia Vikander, and Julianne Moore as different-aged Steinems who occasionally interact with each other at pivotal moments, the biopic also boasts A-list supporting actors including Bette Midler as U.S. Representative Bella Abzug and Janelle Monáe as Ms. magazine co-founder Dorothy Pittman Hughes.

Poignant and intimate, the narrative isn’t afraid to take its time, flowing between decades and locales as if in a free-associative dream state. And the script’s deliberate focus on intersectional feminism makes a powerful statement. But director Julie Taymor’s highly stylized detours (a technique put to better use in her previous films Titus and Frida) derail the movie’s momentum. Steinem is on a talk-show set one minute, then levitating in a nun’s habit the next. Later, her disappointment over unwanted press is articulated by her younger self spinning on a wheel in a carnival while a sideshow performer throws knives at her. These jarring metaphorical gambits, however, are the only wrong turns in what is otherwise an enjoyable and inspiring journey. (4/5)

THE GLORIAS
Directed by Julie Taymor
Out September 25

In "Antebellum," Janelle Monáe Contends With Slavery In America's Past And Present