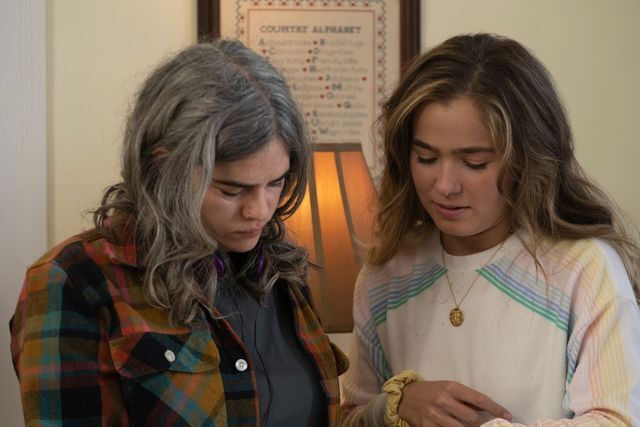 HBO Max’s Unpregnant isn’t a typical buddy comedy; it’s not your average film about an abortion, either. When college-bound Veronica (Haley Lu Richardson) discovers she’s pregnant, it’s a no brainer: she doesn’t want to be. Unfortunately, she learns early on that the nearest clinic that doesn’t require parental consent is several states away, and she can’t exactly tell her parents or her gossip-obsessed group of friends. Enter Bailey (Barbie Ferreira), her oddball ex-best friend…and possibly the only person Veronica can turn to.

“I feel like making a movie is so personal, and I spent a year and a half every day digging so deeply into this project that there’s hundreds of things that are, in some way, me,” director and writer Rachel Lee Goldenberg told BUST over Zoom. Like Veronica, Goldenberg has had an abortion. “But certainly, you know, I really related to and was happy to represent Veronica’s perspective of knowing that she wanted an abortion, feeling confident about that, and the turmoil coming from figuring that out, not the decision or any sort of aftermath.”

Unpregnant isn’t just a film with a strong message about reproductive rights, though. It’s also a hilarious, often emotional movie about friendship (and friend breakups). We talked to Goldenberg about the process of bringing Unpregnant to life, why its underlying message is so resonant, and the platonic love story at its center.

Unpregnant is based on a YA book by Jenni Hendriks and Ted Caplan. What stood out to you when you first read the novel?

The film, like the book, is so funny, but also treats serious subject matter with gravity and care. How did you strike that balance?

This movie is a story about these two ex-best friends rekindling their friendship, so that was my main focus, scene to scene, every day on set…their friendship is really the heart of it, and I love that we have this plot that takes them there, that has this great reproductive rights message, but for me, it was really about them, where the characters need to be in what scene and what things are going to bring them together and what things are going to drive them apart. And so, you know, that was really the guiding light. I also think it’s helpful that, I sort of mentioned before, the obstacles and a lot of the comedy comes from the difficulty of the journey.

There were a few parts of the film that were changed from the book. Was there anything in particular that felt important to change, add, or clarify when adapting the story?

So the authors of the book actually did the first draft of the script, and then my writing partner and I worked on it from there, so it was really a collaboration throughout. But you know, I think when adapting, the important thing is not to be thinking about how you’re adapting, it’s more to think about this as a new piece of work that needs to live on its own…if you do a good job, no one’s going to talk about what you’re missing or what they wish was there. You really just need to service the new thing. So that was really my focus and finding ways to get into the characters’ heads since it’s not in the first person.

I guess Kevin was another thing that has sort of evolved in the process, and I think for me, I just wanted to make sure that Kevin wasn’t too simple of a villain, you know? Poking holes in a condom is sexual assault. I wanted to sort of ground him a little more than that and make sure that he felt relatable. (Editor’s note: In the Unpregnant book, Veronica’s boyfriend pokes holes in the condom they use. In the movie, Kevin notices that their condom broke, but doesn’t tell her.) You know, we can dislike him, but we understand where he’s coming from – from a place of, I’d say, insecurity and immaturity.

I also loved the decision to give Bailey a love interest – I know that was a change from the book.

To have the journey have its ups and downs and have its moments, I kind of wanted to keep that as a pure win for her. Because Bailey has some struggles in this story, she has some hard times, and so it felt like it would be nice for her to just have one clean, really nice relationship that she builds that we leave open-ended but that she sort of gets to have that experience and not undercut it by having it turn out negative.

Barbie and Haley have such wonderful on-screen chemistry – were any scenes or moments improvised or ad-libbed?

You know, there wasn’t necessarily improv, [but] we rehearsed and we would amend the script after rehearsals. So we would talk through things and then in their fight, she would say, ‘Well, I wouldn’t say this,’ or ‘This wouldn’t be my response if she said that,’ or ‘I don’t think I would be this open about my feelings’ or whatever it was. So there was definitely script changes made based on discussion and based on character notes that they had, or based on stuff that came up in rehearsal.

There were so many obstacles leading up to Veronica’s abortion, but then the actual procedure felt like kind of less of a big deal, relatively. Was this a point you wanted to make with the movie? Do you think it’s often true in real life?

So many of your projects center women’s stories and feature complex, hilarious characters. What are you attracted to when you take on a project?

It’s become increasingly important to me to spend my time on things that matter in some larger sense. And so I feel like Unpregnant’s maybe the purest example of that, but I’m always seeking out projects that have themes that I care about and ideally some sort of political or social justice message that I think is important. And then that only works, and I’m only interested, if there’s actually interesting characters and I’m taken by the complexity and the truth and the journey of these characters.

Ted Cruz Thinks the Abortion Pill Should be Banned and, Apparently, Pregnancy is a Walk in the Park

Tags: Rachel Lee Goldenberg , Unpregnant , abortion , pro-choice , HBO Max , female friendship , comedy
Support Feminist Media!
During these troubling political times, independent feminist media is more vital than ever. If our bold, uncensored reporting on women’s issues is important to you, please consider making a donation of $5, $25, $50, or whatever you can afford, to protect and sustain BUST.com.
Thanks so much—we can’t spell BUST without U.