Saints and Sinners: The Madonna-Whore Complex in "Yes, God, Yes" 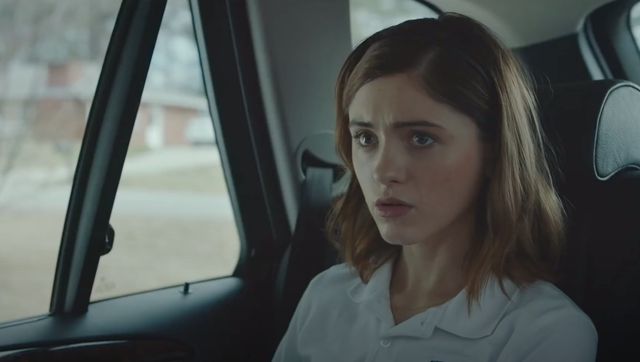 While in middle school, I found myself in the beam of a youth group chaperone’s flashlight while dancing “too close” to a boy in a Michigan church. “Leave room for Jesus!” the chaperone shouted at us through the crowd of fellow awkward 13-year-olds. The incident was illuminating in more ways than one: it got me thinking about how parts of me didn’t belong in the world of religious repression, but it was also just funny as hell. Which is how I would describe the experience of watching Yes, God, Yes.

The feature directorial debut from Karen Maine (who also wrote 2014’s Obvious Child), Yes, God, Yes offers a playful, personal take on sexual awakening in the coming-of-age narrative. The semi-autobiographical film stars Natalia Dyer (Stranger Things’ Nancy) as Alice, a sheltered 16-year-old attending a Catholic high school in suburban Iowa circa the early 2000s. Much of the film borrows oddments of Maine’s own life, from a creepy religious retreat to horny AOL chats to a soundtrack of equally-cringey Christian worship songs and Y2K radio rock. With a focus on the friction between female sexuality and Catholic guilt, the film explores Alice’s attempts to reconcile her own inner tinglings with the polarized voices coming at her from all directions.

The film offers a unique understanding of the Madonna-whore complex in the stage of life when a person is starting to understand their sexuality and in an ideological environment where the complex is often perpetuated. Sigmund Freud’s Madonna-whore complex describes the phenomenon of men categorizing women as either Madonnas (a la “the virgin mother”) or whores (i.e. sexually liberated women). Men with this complex supposedly desire but cannot respect a “whore,” while they respect but cannot desire a “Madonna.” The Madonna-whore complex appears in contexts from Catholic schools to dating apps. Of course, it does not account for the many dimensions of the women it compartmentalizes.

When it comes to both the Madonna-whore complex and religious repression, women are often positioned as either saints or sinners based upon where they fall within the domain of the male gaze. Traditional religious dogma often chastises girls into chastity and directly or indirectly pushes them to exhibit stereotypically “feminine” traits such as modesty, purity and gentleness. In Yes, God, Yes, Alice is taught that her worthiness must be earned—and then continuously proven—through piety, purity, and perfection. The film’s laughably alarmist sex education class draws from Maine’s own sex-ed experience, which emphasized graphic details about sexually-transmitted diseases while overlooking the subject of condoms entirely. “A friend of mine from public school had to show me how to use a condom using the stick shift in her car,” she told Roger Ebert. While Alice attends this class, her friend attends another and is given a baby doll so she can practice maternal duties. Idealizing the “virgin mother,” these instances of Catholic sex-ed prepare female students for procreation, but not for pleasure.

Mystified by the incomplete information she is given, Alice is immersed in a typically teenage muddle of curiosity, lust and embarrassment. She is intrigued by the sex scene in Titanic and curious about interactions with horny strangers in AOL chatrooms. She gets lost in a slow-motion fantasy sequence involving arm hair and “Genie in a Bottle.” Regardless of her literal virginity, Alice fits into neither the “virgin” nor the “whore” category in the context of Catholicism. Because she is not a saint, she is deemed a sinner by default. She must confess, and then repress, any parts of herself that are deemed unworthy (of respect, of the kingdom of heaven, et al).

Though she is pushed to resist temptation, Alice is repeatedly reminded of its contradictions. While confessing her sins, she is confronted by Titian’s painting “The Fall of Man,” which depicts Adam and Eve, naked save for a few leaves and surrounded by forbidden fruit. While Alice masturbates with a vibrating yellow cell phone, a crucifix on the wall looms over her in condemnation, quickly extinguishing her pleasure. When she kisses her peppy, handsy crush, he berates her for his boner, runs away, and later insists on only hugging her from the side to avoid further enticement. Female sexuality is seen as a threatening and sinful force that leads men into temptation, as in the Garden of Eden.

It is in this truth that Alice comes of age and learns to listen to her own voice—the voice of neither a Madonna nor a whore, neither a saint nor a sinner, but a complex woman. No longer restrained by shame, Alice finally achieves her release (with a little help from a vibrating back massager).

“Leaving room for Jesus” is an individual’s choice. But Yes, God, Yes makes the case that salvation lies in leaving room for ourselves—in our curious, contradictory, carnal glory.

"Trinkets" Star Chloë Levine On Why She Loves Her Breakout Character: BUST Interview