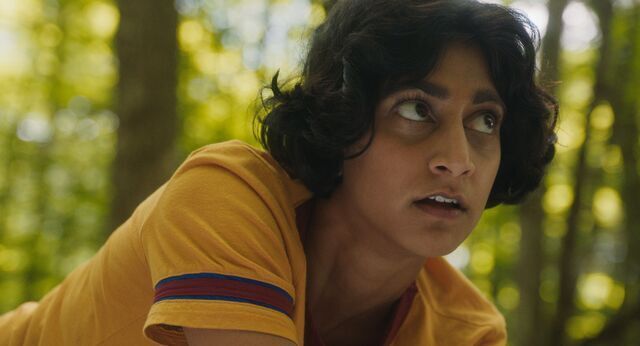 The new comedy Save Yourselves! stars Sunita Mani and John Reynolds as a couple who decide to unplug from their phones by going to a cabin for the weekend. Little do they know that, as they checked out, an alien invasion started happening. The movie is a sharp comedy about phones but, most importantly, relationships. We talked with Sunita Mani about her experience playing lead character Su.

What attracted you to this project and what stood out to you about it when you read the script?

I’m really [close] with Alex and Eleanor, the directors. They’re dear friends of mine. So I was very much on board with just the idea of it. And they sent me a script, probably like a year and a half before we were in production, and when I read it, I was just blown away by the premise. I thought it was just so clear and funny. And to play a lead character like Su would be so fun. She’s really active and really smart and strong and she is way more composed and collected than I am in real life.

I noticed when I was watching the movie that you have really good chemistry with John Reynolds. What was it like to work with him?

The best. I trust John a lot. I’m a huge fan of John Reynolds. We come from the same alt-comedy scene in New York. We had been on shows together and we were friends before we worked together explicitly on this movie. So, I was a huge fan from afar. I was really, really excited, I think he has such great taste, his sensibility is so funny to me. He’s literally one of the funniest people on the planet. It was just like nonstop painful laughter on set because of John Reynolds. I think he’s super talented and our chemistry comes from really just trusting each other’s sensibilities.

What was it like to work with Eleanor and Alex? I know you’re very good friends with them. Was this your first time working with them on a movie?

It was my first time working with Eleanor on a movie. I have worked with Alex multiple times in many different capacities and I definitely have a working collaborative rapport with Alex in a way that is way more like nonsense and improvised and absurd than Save Yourselves! is. So I was definitely recalibrating to work with them as a pair. And they’re totally great together. It’s really dynamic because they really do see things quite differently, quite opposite. So there was a lot of variety and takes and a lot of tonal differences between the two. So that was interesting. Even though we’re friends, I think there was like a very professional kind of line that was apparent to me that I wanted to respect and I think they respected as well.

Watching the film, I feel like it asks the viewer to question the role of technology in their own lives. What kind of statement do you think the film makes?

Yeah, it’s scary how relevant this movie feels in this apocalypse we’re in right now and this pandemic. I don’t think the movie hits it that hard or that heavily. I think the sort of small scale relationship story between Jack and Su is like the main. All we have is each other. Yes, we have these tools like our phones and computers and what not to guide us or help us make this life easier and hopefully more connected and more enriching. You’re in it with your people, your partner, even if that means at the end of the movie, your demise. That’s how I read it.

How do you think you would fare if an alien invasion happened tomorrow?

Oh my god, terribly. I think about this a lot. I wear contacts as well as my character Su. And I always think about that. I would be blind in a few days because I couldn’t change my contacts. I’m not strong, I would have to rely on my community heavily. And I do think between my partner and my friends, hopefully, we’d at least have fun dying. I think that is a strength. It would be like a party, a bit. I don’t know how I would do, it would be so sad and I would hope I die quick. I truly have no skills.

I also think it’s really interesting how it’s very connected to the whole idea of how they completely abandon their technology and then they find out that there’s an apocalypse. It reminds me of how people say, “It’s okay to put down your phone.” But I’m thinking, “If I put down my phone, I’m gonna miss what’s happening in the world and there are a gajillion things happening in the world right now.”

Right. And maybe there’s this whole alternate movie universe where they never turn on their phones and they never knew about the apocalypse and they just die peacefully in their sleep. Who knows? They could’ve just been blissfully ignorant. There’s such a multifaceted multidimensional reality we’re living in. You have so much control and no control at the same time.

Did you learn anything about yourself and how you interact with technology and others through the process of making this film?

It was a big acting challenge for me. I felt really connected with the script and I got the idea which helped me kind of relax into it a little more. And I just wanted to bring the best life I could to the character. So on set, I was learning a lot about who I am as an actor, I suppose. Even though we’re in this bubble, this beautiful cabin, I would often find myself going home and turning on the TV or putting on the radio. It was almost like coming back to this weirdly comfortable reality. It was to sort of get my mind off of things. I didn’t immerse myself in the no technology bubble for the shoot.

stars Sunita Mani and John Reynolds as a couple who decides to unplug from their phones by going to a cabin for the weekend. Little do they know that when they unplugged, an alien invasion was happening. The movie is a sharp comedy about phones but most importantly, relationships.